Wave- and heat-equation on surfaces. Wave equation Let M be a surface and f:R×M→R a function. 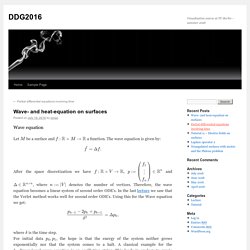 The wave equation is given by:¨f=Δf. After the space discretization we have f:R×V→R, p:=(f1⋮fn)∈Rn and Δ∈Rn×n, where n:=|V| denotes the number of vertices. Therefore, the wave equation becomes a linear system of second order ODE’s. In the last lecture we saw that the Verlet method works well for second order ODE’s. Cembalo initial data: p0=p1, here the string gets plucked, i.e. at time t=0 the oscillation is po and the speed is zero.Piano initial data: p0=0, here the string gets struck i.e. at time t=0 the oscillation is zero but the speed is not. A different way to find solutions of the wave equations is to calculate the eigenfunctions of the laplace operator, g:M→R:Δg=−ω2g. Создание RenderMan (RSL) и Mantra (VEX) шэйдеров в Houdini. 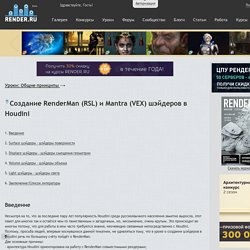 FlexMonkey: Randomly Transforming Scattered Cones in Houdini. Here's an animation of a rocky planetoid with a liquid core that ejects a stream of water in an aquatic volcano. 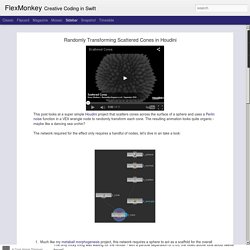 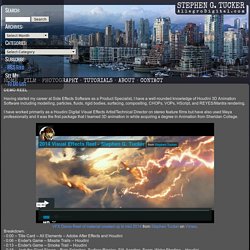 I have worked primarily as a Houdini Digital Visual Effects Artist/Technical Director on stereo feature films but have also used Maya professionally and it was the first package that I learned 3D animation in while acquiring a degree in Animation from Sheridan College. Finding myself in the United Kingdom for a couple of months, I made an effort to get out now and then and see some of the landscapes that the nation has to offer. Most of where I visited was throughout Scotland, however there's a little bit of Cornwall to be found in this video as well. Ocean FX – Antonio Cappiello. Inspiration This project followed the lessons from the fxphd Ocean Surface class. 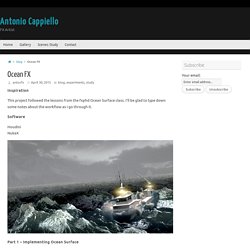 I’ll be glad to type down some notes about the workflow as I go through it. Hosuk. This is the technique that we used for World of Warcraft Cataclysm Cinematic with my co-worker Matt Cordner. 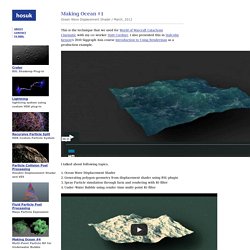 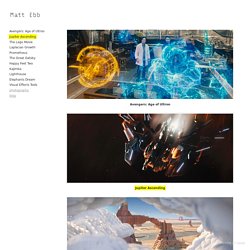 Christoph Bader. Houdini Volume and Pyro Render Optimization – mad guru. I’m not a Houdini expert by any means, but I’ve been working with it for about 5 or 6 months now, focused on creating volumes and pyro. 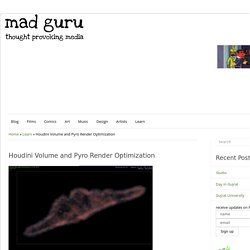 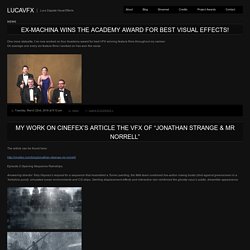 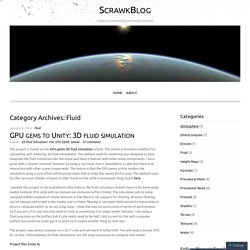 This article presented a method for calculating and rendering 3D fluid simulations. The method used for rendering was designed to best integrate the fluid simulation into the scene and have it interact with other scene components. I have gone with a simpler renderer however by using a ray tracer that is attached to a cube and there is no interaction with other scene components. The reason is that the GPU gems article renders the simulation using a post effect which would mean that in Unity this would be Pro only. The method used for the ray tracer shader is based on that found on the Little Grasshopper blog found here. I wanted this project to be available in Unity Indie as the fluid simulation doesn’t have to be done using render textures (Pro only) and can instead use compute buffers (Indie). This project uses direct compute so is dx11 only and will work in Unity Indie. Timucin Ozger on Vimeo. Ilan Gabai - FX Blog. Sign Up. Houdini Projects (Video)

Blog — Nick Pfeiffer - VFX Artist. Well my classes officially started yesterday! 10 months of FX training from the man Allan McKay himself! This is exactly the type of material I've always wanted to be learning!! For those of you that don't know, I graduated back in April and have been looking for a job since. I started getting interested in 3d about 6 years ago making explosions in 3ds max with FumeFX. I've always had a passion for FX simulations (explosions, water, fire, destruction, etc...) and this is finally my chance to learn from a big inspiration of mine Allan McKay. Graduates of Allans first class are now Technical Directors at some of the biggest studios producing the amazing work seen in big blockbuster films. Senior Effects Technical Director.

The course analyzes a variety of issues: from the beginning of the development of an instrument, selection of the approach and the method to the features and subtleties in solving of various tasks. A lot of code, practical advice and a large amount of Python. Introduction to FX using Houdini with Spencer Lueders. Spencer Lueders is currently a FX Lead at Sony Pictures Imageworks in Los Angeles. Tutorials / Downloads. Houdini Tutorials. NSDesign - Houdini Projects and Experiments. Master Mason. Houdini Adventures. Guillaume Jobst CG blog: Houdini. French Follows! The idea of this article is to show how to use Python in Houdini for the creation of SOP node. Ramblings of a digital nomad: houdini. Learn how to grow a 3D tree - The Grove. Let’s get started. If you haven’t already, get The Grove 3D tree growing software.

Download it to wherever you like. Research And Development. Leeroy johnson FX blog. Cut And ...: Fluid. Houdini's learning journal. Localising Fluid Mesh Detail Using Vorticity — Animated Pixels. The original mesh was 301, 096 points and the mesh with a vorticity field controlling the meshing is 151, 201 points. Houdini - 标签 - 嘉豪一点点. Houdini Tricks.