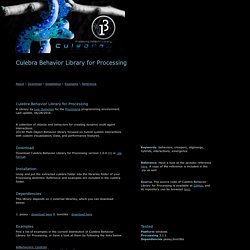 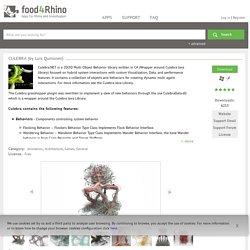 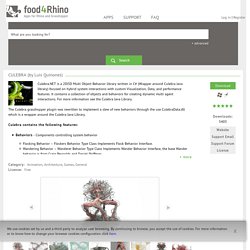 It contains a collection of objects and behaviors for creating dynamic multi agent interactions. For more information see the Culebra Java Library. The Culebra grasshopper plugin was rewritten to implement a slew of new behaviors through the use CulebraData.dll which is a wrapper around the Culebra Java Library. Culebra contains the following features: Behaviors - Components controlling system behavior Flocking Behavior – Flockers Behavior Type Class Implements Flock Behavior Interface. For questions and/or discussions please visit Grasshopper Culebra Group Demo Files, Videos & Project Information : Please use the Demo Files Included in the installer which will be automatically placed in the Culebra_2 Folder in your documents - Demo_Files To Install: Contact Info: Boids (Flocks, Herds, and Schools: a Distributed Behavioral Model) In 1986 I made a computer model of coordinated animal motion such as bird flocks and fish schools. 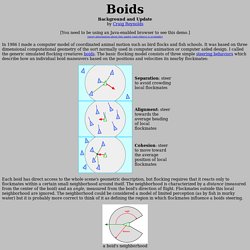 It was based on three dimensional computational geometry of the sort normally used in computer animation or computer aided design. I called the generic simulated flocking creatures boids. The basic flocking model consists of three simple steering behaviors which describe how an individual boid maneuvers based on the positions and velocities its nearby flockmates: Each boid has direct access to the whole scene's geometric description, but flocking requires that it reacts only to flockmates within a certain small neighborhood around itself. The neighborhood is characterized by a distance (measured from the center of the boid) and an angle, measured from the boid's direction of flight. Craig W. Reynolds. My interests center around using procedural models (computer programs) to simulate complex natural phenomenon. 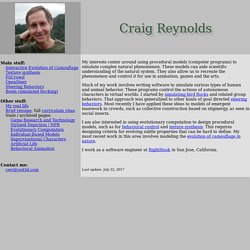 These models can aide scientific understanding of the natural system. They also allow us to recreate the phenomenon and control it for use in animation, games and the arts. Much of my work involves writing software to simulate various types of human and animal behavior. These programs control the actions of autonomous characters in virtual worlds. I started by simulating bird flocks and related group behaviors. I am also interested in using evolutionary computation to design procedural models, such as for behavioral control and texture synthesis.

I work as a software engineer at RightHook in San Jose, California. The Probotics. Probotics.wordpress. Flocking \ Examples. The Nature of Code. “This is an exercise in fictional science, or science fiction, if you like that better.” — Valentino Braitenberg Believe it or not, there is a purpose. 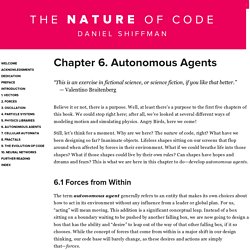 Well, at least there’s a purpose to the first five chapters of this book. We could stop right here; after all, we’ve looked at several different ways of modeling motion and simulating physics. Angry Birds, here we come! Still, let’s think for a moment. 6.1 Forces from Within The term autonomous agent generally refers to an entity that makes its own choices about how to act in its environment without any influence from a leader or global plan. Here are three key components of autonomous agents that we’ll want to keep in mind as we build our examples. An autonomous agent has a limited ability to perceive environment. In the late 1980s, computer scientist Craig Reynolds developed algorithmic steering behaviors for animated characters. 6.2 Vehicles and Steering Show Raw Why Vehicle? MacalNorth. Multi-agent systems. Some of the most beautiful, fascinating or strange phenomena of nature can be understood as emerging from the behaviors of interacting agents. 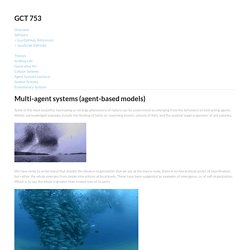 Widely acknowledged examples include the flocking of birds (or swarming insects, schools of fish), and the societal 'superorganisms' of ant colonies. We have come to understand that despite the obvious organization that we see at the macro-scale, there is no hierarchical center of coordination, but rather the whole emerges from simple interactions at local levels. These have been suggested as examples of emergence, or of self-organization. Which is to say, the whole is greater than a naive sum of its parts. Agent-based models, or multi-agent systems, attempt to understand how non-trivial organized macro-behavior emerges from objects that interact primarily at a local-level. What is an agent? The agent abstraction has arisen somewhat independently in different fields, thus the definition of an agent can vary widely. Tortoises and Vehicles >> video.