If dishwashers were iPhones. Dear Members of the Speckless Community, 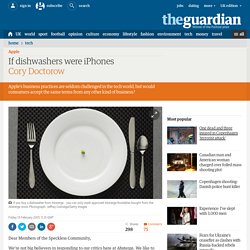 Two humans, one robot and a lot of ethical questions. 23 January 2015Last updated at 19:38 ET By Emma Jones BBC News. 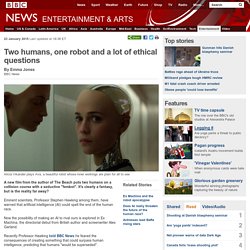 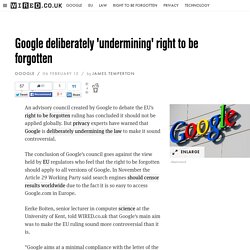 But privacy experts have warned that Google is deliberately undermining the law to make it sound controversial. With employee help, ID theft ring allegedly stole $700,000 in Apple gift cards. Apple products are some of the most expensive and desirable in tech so it makes sense that the company's gift cards are proving an attractive currency for criminals. 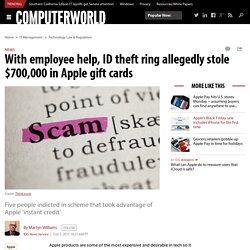 On Thursday, the Manhattan District Attorney's office said it has indicted five people for using personal information stolen from around 200 people to fund the purchase of hundreds of thousands of dollars in Apple gift cards, which in turn were used to buy Apple products. The DA's office alleges that Annie Vuong, a 27-year-old from the Bronx, stole the names, address, birth dates and social security numbers of patients at the Manhattan dental office where she worked. 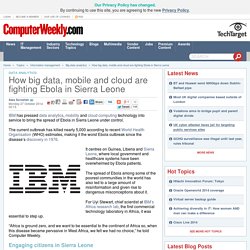 The current outbreak has killed nearly 5,000 according to recent World Health Organisation (WHO) estimates, making it the worst Ebola outbreak since the disease’s discovery in 1976. It centres on Guinea, Liberia and Sierra Leone, where local government and healthcare systems have been overwhelmed by Ebola patients. The spread of Ebola among some of the poorest communities in the world has also led to a large amount of misinformation and given rise to dangerous misconceptions about it. For Uyi Stewart, chief scientist at IBM’s Africa research lab, the first commercial technology laboratory in Africa, it was essential to step up. “Africa is ground zero, and we want to be essential to the continent of Africa so, when this disease became pervasive in West Africa, we felt we had no choice,” he told Computer Weekly. The internet is not the answer – Tech Weekly podcast. Fightback against internet giants’ stranglehold on personal data starts here. 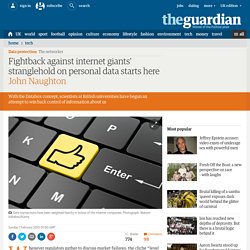 Gamer raided by Swat team in front of 60,000 viewers. The noise-cancelling headphones Joshua Peters, 27, wears while playing the popular browser games Clash of Clans and Runescape for almost 60,000 followers on the live streaming site Twitch mean that he did not hear 10 armed police enter his house. 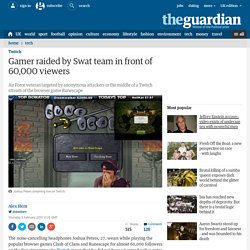 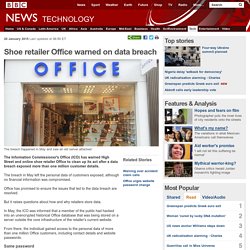 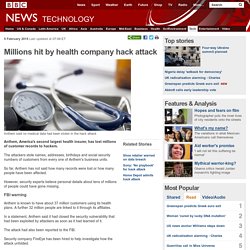 The attackers stole names, addresses, birthdays and social security numbers of customers from every one of Anthem's business units. So far, Anthem has not said how many records were lost or how many people have been affected. However, security experts believe personal details about tens of millions of people could have gone missing. Twitter boss admits firm is failing victims of trolling.

5 February 2015Last updated at 06:43 ET Trolling, or cyberbullying, on social networks appears to be a growing problem Twitter's chief executive Dick Costolo has admitted that the company "sucks" when it comes to dealing with abuse and trolling on the service. 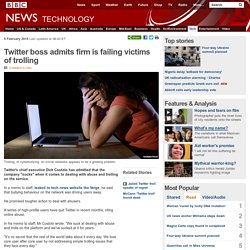 In a memo to staff, leaked to tech news website the Verge, he said that bullying behaviour on the network was driving users away. GCHQ censured over sharing of internet surveillance data with US. 6 February 2015Last updated at 11:13 ET UK surveillance agency GCHQ has been officially censured for not revealing enough about how it shares information with its American counterparts. The Investigatory Powers Tribunal said GCHQ failed until December 2014 to make clear enough details of how it shared data from mass internet surveillance. Nine things we learned from Apple's monster financial results.

Apple enjoyed an impressive last three months in 2014, reporting record revenues of $74.6bn and a net profit of $18bn – the largest quarterly profit ever for any company, energy firms included. We already know about Apple’s record iPhone sales – 74.5m units – during the quarter, but the company’s earnings call with analysts after the results were announced yielded more information about its business in 2014 and its plans for 2015. Here are the key lessons. 1. Apple Watch will ship in April “Development for Apple Watch is right on schedule and we expect to begin shipping in April,” said chief executive Tim Cook during the call. First unveiled in September, Apple Watch vaguely meant to be available in “early 2015” then “spring”.

But isn’t April a bit later than “early” would have led people to expect? Cook said that developers are working on bespoke apps, notifications and information summaries that Apple calls “glances” for the Apple Watch. Apple: what do you do after becoming the world’s most profitable company?