CONTRAPPOSTO. ALLEGORY. Sampling – Art Term. Representational – Art Term. Replica – Art Term. Unlike a fake, a replica is not trying to pass for the original and is often made by the artist and used for historical and educational purposes. 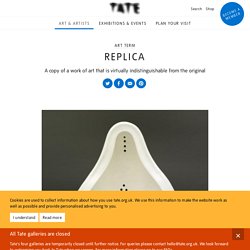 The vogue for collecting replicas reached the height of popularity in the mid to late nineteenth century when few people could afford to travel on the Continent, so museums acquired reproductions of important monuments and works of art to complement their collections. Replicas in modern art are made as a result of original works of art decaying or being lost. Marcel Duchamp’s Fountain, the most famous of the artist’s readymade sculptures, was replicated in collaboration with Duchamp from a photograph of the lost original. Tate holds the largest collection of plastic sculptures by Naum Gabo, but despite controlled storage conditions, many of these works are cracking and warping. Computer software can be used to help virtually restore the sculpture models, so that replicas can be made of the originals. 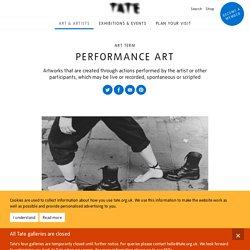 Throughout the twentieth century performance was often seen as a non-traditional way of making art. Live-ness, physical movement and impermanence offered artists alternatives to the static permanence of painting and sculpture. In the post-war period performance became aligned with conceptual art, because of its often immaterial nature. Now an accepted part of the visual art world, the term has since been used to also describe film, video, photographic and installation-based artworks through which the actions of artists, performers or the audience are conveyed. More recently, performance has been understood as a way of engaging directly with social reality, the specifics of space and the politics of identity. Landscape – Art Term. The appreciation of nature for its own sake, and its choice as a specific subject for art, is a relatively recent phenomenon. 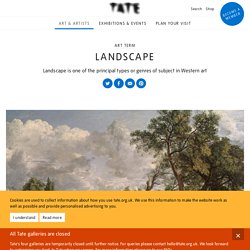 Until the seventeenth century landscape was confined to the background of portraits or paintings dealing principally with religious, mythological or historical subjects (History painting). Today, landscape continues to be a major theme in art with many artists using documentary techniques such as video, photography and classification processes to explore the ways we relate to the places we live in and to record the impact we have on the land and our environment. Psychogeography – Art Term. How do different places make us feel and behave? 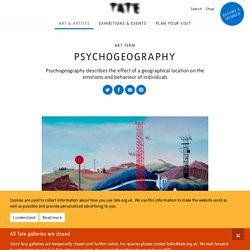 The term psychogeography was invented by the Marxist theorist Guy Debord in 1955 in order to explore this. Inspired by the French nineteenth century poet and writer Charles Baudelaire’s concept of the flâneur – an urban wanderer – Debord suggested playful and inventive ways of navigating the urban environment in order to examine its architecture and spaces. As a founding member of the avant-garde movement Situationist International, an international movement of artists, writers and poets who aimed to break down the barriers between culture and everyday life, Debord wanted a revolutionary approach to architecture that was less functional and more open to exploration.

Conceptual art – Art Term. Although the term ‘concept art’ had been used in the early 1960s (Henry Flynt of the Fluxus group described his performance pieces as ‘concept art’ in 1961), it was not until the late sixties that conceptual art as a definable movement emerged. 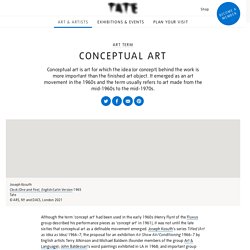 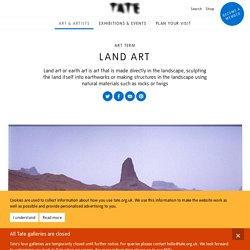 The most famous land art work is Robert Smithson’s Spiral Jetty of 1970, an earthwork built out into the Great Salt Lake in the USA. Though some artists such as Smithson used mechanical earth-moving equipment to make their artworks, other artists made minimal and temporary interventions in the landscape such as Richard Long who simply walked up and down until he had made a mark in the earth. Land art, which is also known as earth art, was usually documented in artworks using photographs and maps which the artist could exhibit in a gallery.

Land artists also made land art in the gallery by bringing in material from the landscape and using it to create installations. As well as Richard Long and Robert Smithson, key land artists include Nancy Holt, Walter de Maria, Michael Heizer and Dennis Oppenheim. Academy – Art Term. The first art academies appeared in Italy at the time of the Renaissance. 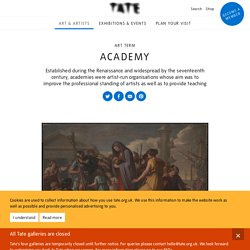 They were groupings of artists whose aim was to improve the social and professional standing of artists, as well as to provide teaching. To this end they sought where possible to have a royal or princely patron. Previously, painters and sculptors had been organised in guilds, and were considered mere artisans or craftsmen. Academies became widespread by the seventeenth century, when they also began to organise group exhibitions of their members’ work. Genres – Art Term. Impressionism – Art Term. Impressionism was developed by Claude Monet and other Paris-based artists from the early 1860s. 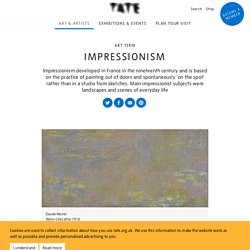 (Though the process of painting on the spot can be said to have been pioneered in Britain by John Constable in around 1813–17 through his desire to paint nature in a realistic way). Instead of painting in a studio, the impressionists found that they could capture the momentary and transient effects of sunlight by working quickly, in front of their subjects, in the open air (en plein air) rather than in a studio. This resulted in a greater awareness of light and colour and the shifting pattern of the natural scene. Brushwork became rapid and broken into separate dabs in order to render the fleeting quality of light. The first group exhibition was in Paris in 1874 and included work by Monet, Auguste Renoir, Edgar Degas and Paul Cezanne.

Other core artists of impressionism were Camille Pissarro and Berthe Morisot with Edgar Degas and Edouard Manet also often associated with the movement. Naturalism – Art Term. Until the early nineteenth century both landscape and the human figure in art tended to be idealised or stylised according to conventions derived from the classical tradition. 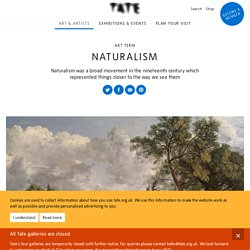 In the nineteenth century there was a trend towards representing things in a more realistic way. In Britain this was pioneered by John Constable who famously said ‘there is room enough for a natural painture’ (type of painting). Realism – Art Term. Until the nineteenth century Western art was dominated by the academic theory of History painting and High art (grand manner). 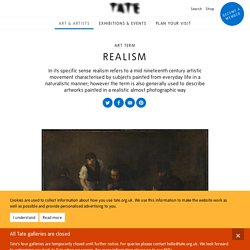 Artistic conventions governed style and subject matter, resulting in artworks that often appeared artificial and removed from real life. Then, the development of naturalism began to go hand in hand with increasing emphasis on realism of subject, meaning subjects outside the high art tradition. The term realism was coined by the French novelist Champfleury in the 1840s and in art was exemplified in the work of his friend the painter Gustav Courbet. In practice realist subject matter meant scenes of peasant and working class life, the life of the city streets, cafes and popular entertainments, and an increasing frankness in the treatment of the body and sexual subjects. The term generally implies a certain grittiness in choice of subject.

See also modern realism. Pre-Raphaelite – Art Term. The name Pre-Raphaelite Brotherhood referred to the groups’ opposition to the Royal Academy’s promotion of the Renaissance master Raphael. They were also in revolt against the triviality of the immensely popular genre painting of time. Inspired by the theories of John Ruskin, who urged artists to ‘go to nature’, they believed in an art of serious subjects treated with maximum realism.

Their principal themes were initially religious, but they also used subjects from literature and poetry, particularly those dealing with love and death. They also explored modern social problems. Its principal members were William Holman Hunt, John Everett Millais, and Dante Gabriel Rossetti. Romanticism – Art Term. This complex shift in attitudes away from the dominant classical tradition was at its height from about 1780 to 1830, but continued to be an influence long after that. The overall characteristic was a new emotionalism in contrast to the prevailing ideas of classical restraint. In British art, Romanticism was embraced in new responses to nature in the art of John Constable and J.M.W. Turner. Visionary artist William Blake examined man’s place in the cosmos and his relationship to God as well as exploring new ways of looking at human history.

Other significant painters of history subjects were Henry Fuseli, James Barry and John Hamilton Mortimer. Later phases of the Romantic movement in Britain embraced Pre-Raphaelites and symbolism. Neoclassicism – Art Term. Following the discovery of the Roman ruins of Pompeii and also the publication in 1764 of a highly influential history of ancient art by German scholar Winckelmann, there was an intense flourishing of classicism in art, architecture and design in the eighteenth century. In Britain it can be seen in the paintings by Sir Joshua Reynolds, Benjamin West and James Barry and in sculpture in the work of John Flaxman, whose illustrations to Homer’s Odyssey particularly reflect this interest.

Neoclassicism was also an important influence on architecture, particularly in Scotland (Alexander ‘Greek’ Thomson) but also for example St George’s Hall, Liverpool; Euston Arch (demolished), and the British Museum, in London. Rococo – Art Term. The name comes from French rocaille, rock-work, based on forms of sea shells and corals. In practice Rococo is a style of short curves, scrolls and counter curves, often elaborated with fantasy. In fine art, Rococo prettiness, gaiety, curvaceousness and sensuality is exemplified in the work of François Boucher, Jean-Honoré Fragonard and Jean-Antoine Watteau and in the sculpture of Clodion. Rococo was brought to Britain by Philip Mercier, who was appointed as principal painter to the Prince and Princess of Wales.

Baroque – Art Term. At its height in Rome from around 1630–1680, Baroque is particularly associated with the Catholic Counter-Reformation. Its dynamic movement, bold realism (giving viewers the impression they were witnessing an actual event), and direct emotional appeal were ideally suited to proclaiming the reinvigorated spirit of the Catholic Church. Although originating in Rome, Baroque was influential across Europe. Mannerist – Art Term. Mannerism is the name given to the style followers of Raphael and Michelangelo from around 1520–1600.

Mannerist artists were influenced by, but also reacted to, the work of the Renaissance masters. Rather than adopting the harmonious ideals associated with Raphael and Michelangelo, they went a step further to create highly artificial compositions which showed off their techniques and skills in manipulating compositional elements to create a sense of sophisticated elegance. Mannerism spread all over Europe, and in Britain the elegant artificiality of Elizabethan court painting can be seen as an echo of it. It also influenced later artists such as Henry Fuseli. Renaissance – Art Term. The Renaissance reached its peak (known as the High Renaissance) in the short period from about 1500–1530 in the work of Michelangelo, Leonardo and Raphael. The Renaissance style then underwent a myriad of successive transformations in Mannerism, Baroque, Rococo, neoclassicism, and the Romantic movement.

Grand manner – Art Term. The term grand manner was given currency by Sir Joshua Reynolds and extensively discussed in his Discourses on Art – fifteen lectures delivered to students at Royal Academy between 1769 and 1790. Reynolds argued that painters should not slavishly copy nature but seek a generalised and ideal form. This ‘gives what is called the grand style to invention, to composition, to expression, and even to colouring and drapery’ (Fourth Discourse). History painting – Art Term. Symbolism – Art Term. Narrative – Art Term. A narrative is simply a story. Narrative art is art that tells a story. Much of Western art until the twentieth century has been narrative, depicting stories from religion, myth and legend, history and literature (see history painting). Audiences were assumed to be familiar with the stories in question. Allegory – Art Term.