One Of The Planets Orbiting 70 Virginis Is A Superjupiter So Close To The Star That It Is Heated To A Red Heat Illustration. New study finds outer planets stable in this system. The original article. 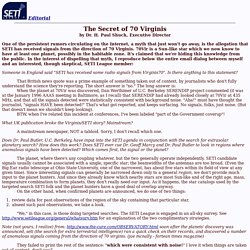 H. Paul Shuch, Executive Director One of the persistent rumors circulating on the Internet, a myth that just won't go away, is the allegation that SETI has received signals from the direction of 70 Virginis. 70Vir is a Sun-like star which we now know to have at least one planet, possibly in the habitable zone. It's claimed that we're hiding this knowledge from the public. Someone in England said "SETI has received some radio signals from Virginis70". That British news quote was a prime example of something taken out of context, by journalists who don't fully understand the science they're reporting.

What UK publication broke the Virginis/SETI story? A mainstream newspaper, NOT a tabloid. Does Dr. The planet, where there's any coupling whatever, but the two generally operate independently. Review data for past observations of the region of the sky containing that particular star, absent such past observations, we take a look. Another painting. The wall decal. The song. One painting. A ringed 70 Virginis b presides over the hot and airless terrain of a hypothetical moon. 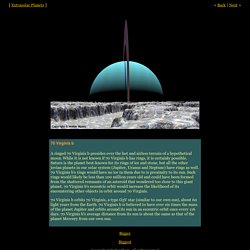 While it is not known if 70 Virginis b has rings, it is certainly possible. Saturn is the planet best-known for its rings of ice and stone, but all the other jovian planets in our solar system (Jupiter, Uranus and Neptune) have rings as well. 70 Virginis b's rings would have no ice in them due to is proximity to its sun. Such rings would likely be less than 100 million years old and could have been formed from the shattered remnants of an asteroid that wondered too close to this giant planet. 70 Virginis b's eccentric orbit would increase the likelihood of its encountering other objects in orbit around 70 Virginis. Thecla. The coffee mug. Pomo goldilocks. "Snow warred on the El's world in the blank snow" --Lowell Seven Eleven, yard workers stop in early; i get my paper. 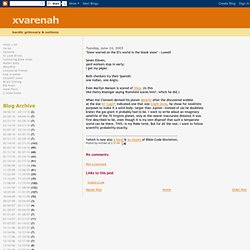 Both checkers try their Spanish: one Indian, one Anglo. Even Marilyn Manson is scared of Otep. (Is this like Henry Kissinger saying Rumsfeld scares him? --which he did.) When Hal Clement devised his planet Mesklin after the discovered wobble at the star 61 Cygni* indicated one that size might exist, he chose for novelistic purposes to make it a solid body--larger than Jupiter--instead of (as he doubtless knew) the gas giant it probably had to be. -------------------------------------------------------------------------- *which is now also a band & an object of Bible-Code bloviation. My contribution. Found this on the main page here: Nice artist's conception [here| Unfortunately, all of the "Goldilocks" reports are based on old data... 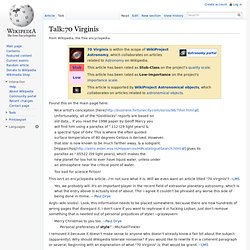 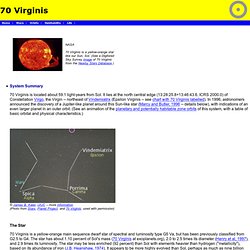 It lies at the north central edge (13:28:25.8+13:46:43.6, ICRS 2000.0) of Constellation Virgo, the Virgin -- northeast of Vindemiatrix (Epsilon Virginis -- see chart with 70 Virginis labelled). In 1996, astronomers announced the discovery of a Jupiter-like planet around this Sun-like star (Marcy and Butler, 1996 -- details below), with indications of an even larger planet in an outer orbit. (See an animation of the planetary and potentially habitable zone orbits of this system, with a table of basic orbital and physical characteristics.) © James B. Kaler, UIUC -- more information (Photo from Stars, Planet Project, and 70 Virginis; used with permission) The Star 70 Virginis is a yellow-orange main sequence dwarf star of spectral and luminosity type G5 Va, but has been previously classified from G2.5 to G4.