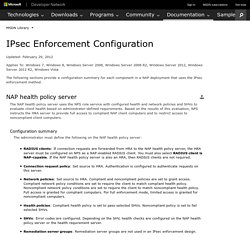 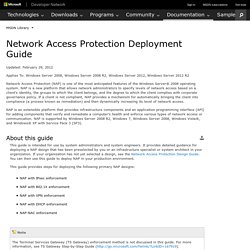 NAP is a new platform that allows network administrators to specify levels of network access based on a client’s identity, the groups to which the client belongs, and the degree to which the client complies with corporate governance policy. If a client is not compliant, NAP provides a mechanism for automatically bringing the client into compliance (a process known as remediation) and then dynamically increasing its level of network access. NAP is an extensible platform that provides infrastructure components and an application programming interface (API) for adding components that verify and remediate a computer’s health and enforce various types of network access or communication. 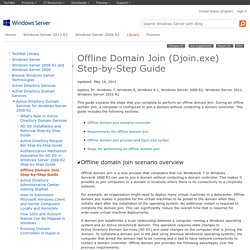 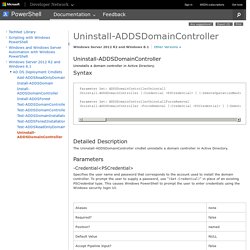 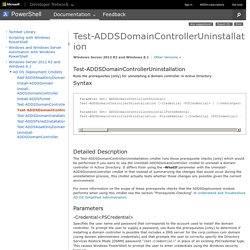 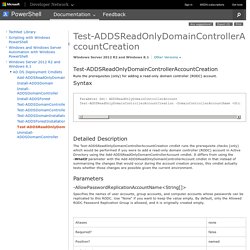 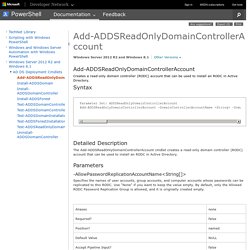 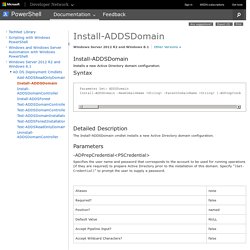 -ADPrepCredential<PSCredential> Specifies the user name and password that corresponds to the account to be used for running operations (if they are required) to prepare Active Directory prior to the installation of this domain. Test-ADDSDomainInstallation. Runs the prerequisites (only) for installing a new Active Directory domain configuration. 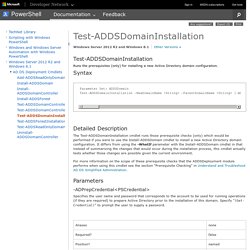 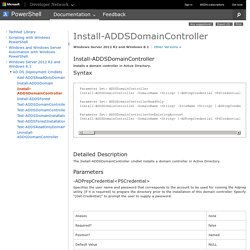 -ADPrepCredential<PSCredential> Specifies the user name and password that corresponds to the account to be used for running the Adprep utility (if it is required) to prepare the directory prior to the installation of this domain controller. Test-ADDSDomainControllerInstallation. Runs the prerequisites (only) for installing a domain controller in Active Directory.

-ADPrepCredential<PSCredential> Specifies the user name and password that corresponds to the account to be used for running operations (if they are required) to prepare Active Directory prior to the installation of this domain. Specify "(Get-Credential)" to prompt the user to supply a password. -AllowDomainControllerReinstall Specifies whether to continue installing this domain controller, despite the fact that another domain controller account with the same name is detected. Install-ADDSForest. Installs a new Active Directory forest configuration. -CreateDnsDelegation Indicates whether to create a DNS delegation that references the new DNS server that you are installing along with the domain controller. Valid for Active Directory-integrated DNS only. The default is computed automatically based on the environment. Introducing the first Windows Server 2012 Domain Controller (Part 1 of 2) - Ask Premier Field Engineering (PFE) Platforms.

Premier Field Engineering has significant experience in the area of AD upgrades. Using the GUI The first thing you need to do of course is install Windows Server 2012. Hyper-V Quality of Service (QoS) In Windows Server 2008 R2, QoS supports the enforcement of maximum bandwidth. Consider a typical server running Hyper-V in which there are four types of network traffic that share a single 10-gigabit Ethernet network adapter: Traffic between virtual machines and resources on other servers (virtual machine data) Traffic to and from storage (storage) Traffic for live migration of virtual machines between servers running Hyper-V (live migration) Traffic to and from a cluster shared volume (CSV) (cluster heartbeat) If virtual machine data is rate-limited to 3 Gbps, this means the sum of the virtual machine data throughputs cannot exceed 3 Gbps at any time, even if the other network traffic types do not use the remaining 7 Gbps of bandwidth. However, this also means that the other types of traffic can reduce the actual amount of bandwidth that is available for virtual machine data to unacceptable levels, depending on whether or how their maximum bandwidths are defined.

John Howard – Senior Program Manager in the Hyper-V team at Microsoft. Now that the veil of silence has been lifted with the release of Windows Server “8” beta , I’m able to tell you a little more about what I’ve been working on for 5 years now. An inside joke is that it’s a feature with two checkboxes in the UI of Hyper-V Manager, so about 2½ years per checkbox! Well clearly it’s a little more than that! A lot more, actually!! SR-IOV stands for Single-Root Input/Output (I/O) Virtualization. It’s is a standard defined by the PCI Special Interest Group. To keep it at a high level (as in all you probably need to know to use the feature), SR-IOV is a standard which describes how a PCI Express device can be constructed so that it works well with modern virtualization solutions. In the above diagram (I’m using networking for my example, but the same principles apply to storage), the physical device is “owned” by the parent partition.

In the last part, we talked about what resource metering is. Now, we’ll get into how to use it with PowerShell. A quick note: if this is your first foray into PowerShell, here are some resources you may find helpful to go through. First, a couple of posts from the Scripting Guy to give you a good overview: An Introduction and PowerShell and Pipelining. Also, check out the Windows PowerShell for the Busy Admin series of webcasts by Scripting Guy Ed Wilson. How to Use Resource Metering With PowerShell - Windows Virtualization Team Blog. Hyper-V Resource Metering Overview. Updated: February 29, 2012. NIC Teaming Overview. Updated: November 5, 2014. Add Servers to Server Manager. Updated: September 29, 2013. Configure Features on Demand in Windows Server. Updated: June 24, 2013.