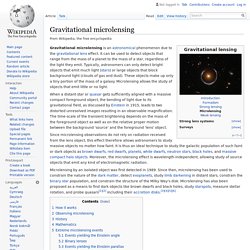 It can be used to detect objects that range from the mass of a planet to the mass of a star, regardless of the light they emit. Typically, astronomers can only detect bright objects that emit much light (stars) or large objects that block background light (clouds of gas and dust). These objects make up only a tiny portion of the mass of a galaxy. Microlensing allows the study of objects that emit little or no light. When a distant star or quasar gets sufficiently aligned with a massive compact foreground object, the bending of light due to its gravitational field, as discussed by Einstein in 1915, leads to two distorted unresolved images resulting in an observable magnification.

Since microlensing observations do not rely on radiation received from the lens object, this effect therefore allows astronomers to study massive objects no matter how faint. How it works[edit] History[edit] ExoFOP. Telescopes for Astrophotography. As with picking a camera, picking the best telescope for your needs will depend on a number of different factors: Telescope Attributes - Telescopes are designed to gather light and bring it to focus so that the image can be examined in detail with an eyepiece, or recorded on film or with a digital camera. 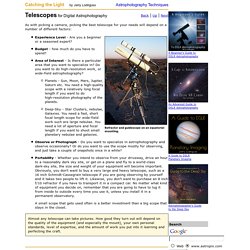 Telescopes reveal fainter objects than can be seen with the eye because they gather more photons than the eye can gather. Smaller details can be seen because they also magnify objects. The nomenclature used to describe telescopes and camera lenses can sometimes be confusing. Telescopes are usually talked about in terms of aperture, while camera lenses are usually talked about in terms of focal length. Telescopes and camera lenses have three main numerical attributes that we are concerned with in describing them: Aperture - The aperture is the size of opening in the telescope through which the lens or mirror gathers light. 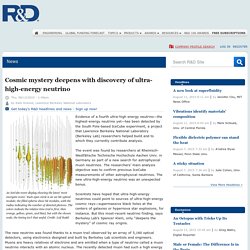 The event was found by researchers at Rheinisch-Westfälische Technische Hochschule Aachen Univ. in Germany as part of a new search for astrophysical muon neutrinos. The researchers’ main analysis objective was to confirm previous IceCube measurements of other astrophysical neutrinos. The new ultra-high-energy neutrino was an unexpected bonus. COBS - Comet observers database. It's still hanging in! 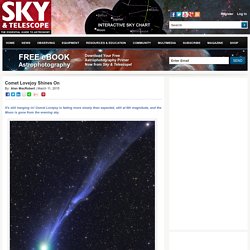 Comet Lovejoy is fading more slowly than expected, still at 6th magnitude, and the Moon is gone from the evening sky. Comet Lovejoy on February 13th, with magnetic tail-disconnection events cutting off bulby lumps in the blue ion tail. Ionized gas conducts electricity; "ionized" means it has free electrons. Therefore a comet's ion tail interacts strongly with the moving, lumpy magnetic fields carried through the solar system by the (also ionized) solar wind. 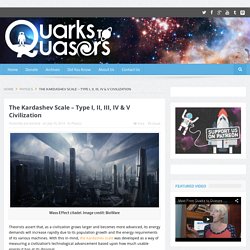 Image credit: BioWare Theorists assert that, as a civilization grows larger and becomes more advanced, its energy demands will increase rapidly due to its population growth and the energy requirements of its various machines. 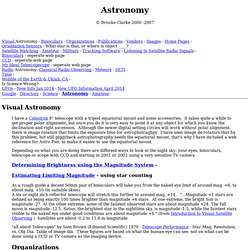 Stripped down: Hubble highlights two galaxies that are losing it. A newly released set of images, taken by the NASA/ESA Hubble Space Telescope before the recent Servicing Mission, highlight the ongoing drama in two galaxies in the Virgo Cluster affected by a process known as "ram pressure stripping", which can result in peculiar-looking galaxies. 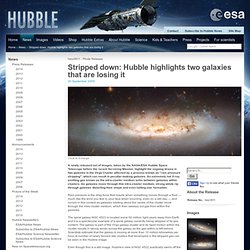 An extremely hot X-ray emitting gas known as the intra-cluster medium lurks between galaxies within clusters. As galaxies move through this intra-cluster medium, strong winds rip through galaxies distorting their shape and even halting star formation. Massive Storm Pulls Water And Ammonia Ices from Saturn's Depths. MADISON, WI — Once every 30 years or so, or roughly one Saturnian year, a monster storm rips across the northern hemisphere of the ringed planet. 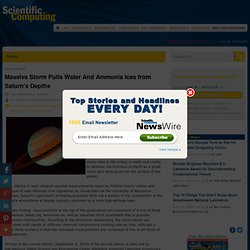 In 2010, the most recent and only the sixth giant storm on Saturn observed by humans began stirring. It quickly grew to superstorm proportions, reaching 15,000 kilometers (more than 9,300 miles) in width and visible to amateur astronomers on Earth as a great white spot dancing across the surface of the planet. Now, thanks to near-infrared spectral measurements taken by NASA's Cassini orbiter and analysis of near-infrared color signatures by researchers at the University of Wisconsin-Madison, Saturn's superstorm is helping scientists flesh out a picture of the composition of the planet's atmosphere at depths typically obscured by a thick high-altitude haze. The effect, Sromovsky says, is to loft the aerosols found deep in the atmosphere to the visible cloud tops, providing a rare glimpse of normally hidden materials. Robert Martin Ayers. 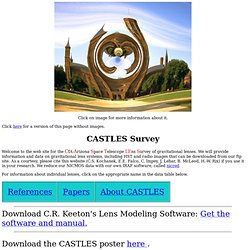 Click here for a version of this page without images. Welcome to the web site for the CfA-Arizona Space Telescope LEns Survey of gravitational lenses. We will provide information and data on gravitational lens systems, including HST and radio images that can be downloaded from our ftp site. As a courtesy, please cite this website (C.S. Kochanek, E.E. For information about individual lenses, click on the appropriate name in the data table below. Download C.R. Download the CASTLES poster here . Explanation of Table Entries IMAGE:Shows a postage stamp image of the system when available. Planet Hunters. GLOBE at Night - Home page. Take part in Citizen Science! Calsky. Edmund Scientifics' Official Blog. Galaxy Zoo: Hubble.