Liquid Metal Printing in 3-D. With aid from the STARTUP-NY tax-free entrepreneurial program and grants and faculty expertise from the University of Buffalo, a father-and-son team is commercializing a machine that prints 3-D objects using liquid metal. 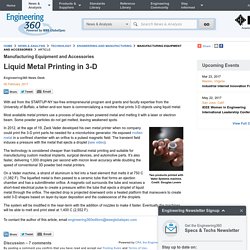 Most available metal printers use a process of laying down powered metal and melting it with a laser or electron beam. Some powder particles do not get melted, leaving weakened spots. Two products printed with Vader Systems machine. Credit: Douglas LevereIn 2012, at the age of 19, Zack Vader developed his own metal printer when no company could print the 3-D print parts he needed for a microturbine generator. He exposed molten metal in a confined chamber with an orifice to a pulsed magnetic field. The technology is considered cheaper than traditional metal printing and suitable for manufacturing custom medical implants, surgical devices, and automotive parts. 3D Resources. 3D Resources. 3D Resources. PCB Laserprinter. Otherworldy CAD Software Hails From A Parallel Universe. The world of free 3D-modeling software tends to be grim when compared to the expensive professional packages. 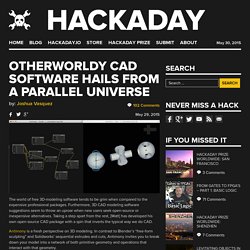 Furthermore, 3D CAD modeling software suggestions seem to throw an uproar when new users seek open-source or inexpensive alternatives. Taking a step apart from the rest, [Matt] has developed his own open-source CAD package with a spin that inverts the typical way we do CAD. Antimony is a fresh perspective on 3D modeling. In contrast to Blender’s “free-form sculpting” and Solidworks’ sequential extrudes and cuts, Antimony invites you to break down your model into a network of both primitive geometry and operations that interact with that geometry. Functionally, Antimony represents objects as a graphical collection of nodes that encode both primitives and operations. 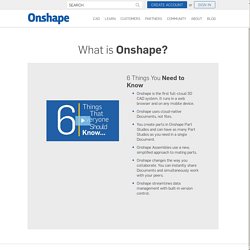 The modeling workflows are very similar to traditional CAD. However, there are new capabilities: Part Studios allow you to build multiple parts together. Parts can share sketches or features and can be used to shape each other using boolean operations.Version control is built into Onshape. "As a SolidWorks user, I was immediately comfortable with the layout and tools provided. Papilio Heat Transfer Foils. The eCommerce store of Papilio, manufacturer of specialty Inkjet and Laser media. HOW TO (video): Xbox 360 KINECT as 3D SCANNER. Real Time 3D Scanning Software. Moedls Samples. 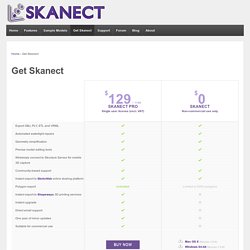 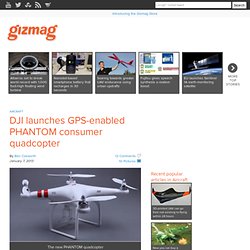 It has several features that set it apart from the popular AR Drone – which may or may not sell you on it. View all First of all, the PHANTOM comes with its own dedicated hand-held radio-frequency control unit, that has a range of 300 meters (984 feet). The AR Drone, by contrast, is controlled by an app on a separate iOS or Android mobile device.

If you already own such a device, that means you only have to buy the US$300 AR Drone itself, making it a better value. The PHANTOM also features a GPS-enabled autopilot mode. Another nifty feature is its camera mount, designed to hold compact video cameras such as the GoPro HERO. The aircraft's lithium-polymer battery offers a claimed 10 to 15 minutes of flight time – just about the same as the AR Drone. The PHANTOM can be seen in use in the rather goofy video below. Source: DJI About the Author. A US$49 personal autonomous micro UAV? The MeCam is a tiny autonomous quadrotor UAV currently in development Image Gallery (4 images) Imagine if you had your own tiny quadrotor unmanned aerial vehicle (UAV) that you could control with your voice, that would automatically follow you while avoiding obstacles, and that could shoot and stream video of you using an onboard camera. 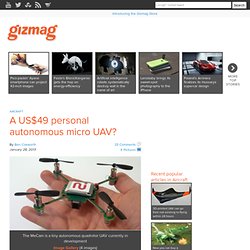 Now imagine that you paid less than 50 bucks for it. Well, if the hype is to be believed, that’s just what tech firm Always Innovating is promising with its MeCam. Not be confused with the unrelated MeCam wearable video camera, the MeCam UAV is currently still in development, but reportedly could be commercially available by the beginning of next year. AR.Drone.