Language <> communication. Fun With Words: Contronyms. A synonym is a word that means the same as another. 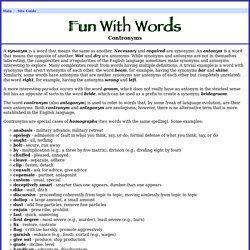 Necessary and required are synonyms. An antonym is a word that means the opposite of another. Wet and dry are antonyms. While synonyms and antonyms are not in themselves interesting, the complexities and irregularities of the English language sometimes make synonyms and antonyms interesting to explore. Many complexities result from words having multiple definitions. A more interesting paradox occurs with the word groom, which does not really have an antonym in the strictest sense but has an opposite of sorts in the word bride, which can be used as a prefix to create a synonym, bridegroom. The word contronym (also antagonym) is used to refer to words that, by some freak of language evolution, are their own antonyms. Contronyms are special cases of homographs (two words with the same spelling). Finding such idiosyncrasies in slang is much easier. Homophones that are near-antonyms: Speaking Exercises. Phrases, Expressions & Sayings.

Phrases, Expressions & Sayings What phrase is guaranteed to wake up an audience? 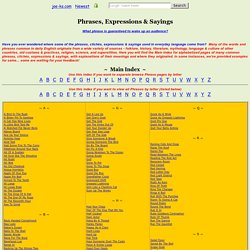 Have you ever wondered where some of the phrases, clichés, expressions & sayings used in everyday language come from? Many of the words and phrases common in daily English originate from a wide variety of sources - folklore, history, literature, mythology, language & culture of other countries, old customs & practices, religion, science, and superstition. Here you will find the Main Index for alphabetized pages of many common phrases, clichés, expressions & sayings, with explanations of their meanings and where they originated. 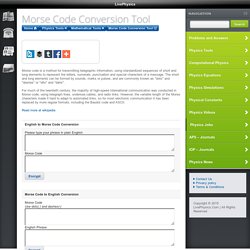 The short and long elements can be formed by sounds, marks or pulses, and are commonly known as "dots" and "dashes" or "dits" and "dahs". For much of the twentieth century, the majority of high-speed international communication was conducted in Morse code, using telegraph lines, undersea cables, and radio links.

However, the variable length of the Morse characters made it hard to adapt to automated links, so for most electronic communication it has been replaced by more regular formats, including the Baudot code and ASCII. Read more at wikipedia Here is how morse code look like for - www.livephysics.com Table of Morse Codes. Learn morse code. American Sign Language. 100 first signs: American Sign Language (ASL) This page contains links to about a hundred basic ASL signs that are frequently used between parents and their young children. 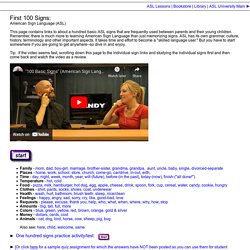 Remember, there is much more to learning American Sign Language than just memorizing signs. ASL has its own grammar, culture, history, terminology and other important aspects. It takes time and effort to become a "skilled language user. " But you have to start somewhere if you are going to get anywhere--so dive in and enjoy. One hundred signs practice activity/test: [Or click here for a sample quiz assignment for which the answers have NOT been posted so you can use them for student testing.] Dr. Lipreading, Learn To Lip Read. Lipreading empowers someone with a hearing loss to lead an independent and fulfilled life. 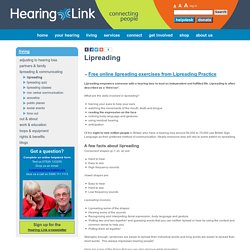 Lipreading is often described as a 'third ear'. What are the skills involved in lipreading? Training your eyes to help your earswatching the movements of the mouth, teeth and tonguereading the expression on the face noticing body language and gesturesusing residual hearinganticipation Of the eight to nine million people in Britain who have a hearing loss around 50,000 to 70,000 use British Sign Language as their preferred method of communication. Nearly everyone else will rely to some extent on lipreading. Lipreading Practice. Spanish. GrammarLab Tutorials Menu. 20 Websites to Help You Learn a New Language. Learn Spanish online. Duolingo app. 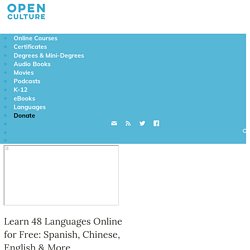 7 Websites That Teach You Foreign Languages for Free - Business Pundit. Learn 46 Languages Online for Free. 100 Free Foreign Language Classes Online. March 1st, 2010 If you have always wanted to learn a language but were too put off by the high cost associated with most classes, then take a look at all these great opportunities to learn a foreign language online, at no cost to you. 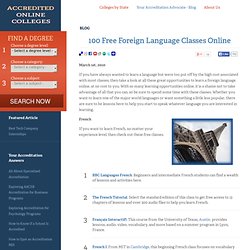 With so many learning opportunities online, it is a shame not to take advantage of all that you can, so be sure to spend some time with these classes. Whether you want to learn one of the major world languages or want something a little less popular, there are sure to be lessons here to help you start to speak whatever language you are interested in learning. French If you want to learn French, no matter your experience level, then check out these free classes. BBC Languages French. Spanish From the basics to more advanced college courses in Spanish, see what is available in this listing. Learn Spanish. German. Learn Japanese Online for Free - it's fun with easy flash quizes! Learn Spanish, French, German, Portuguese, Italian and English for free.