Free Online Books for Kids in English and Multi Language. There are numerous benefits of reading, and every child deserves the gift of a good book. 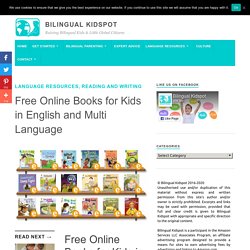 With this list of free online books for kids in English and various other languages, children can read books online free anytime they like. Whether you are lacking books at home for your child’s age group, or you have a home library full of books but your child is bored with those they have, free online books for kids are always accessible if you know where to find them. There is a huge range of books on line for free that you can utilise. Here are a few sites where you can find them. FREE Resources for Working with Russian Speaking Clients: Part II. Earn 10 Reward Points by commenting the blog post A few years ago I wrote a blog post entitled “Working with Russian-speaking clients: implications for speech-language assessment” the aim of which was to provide some suggestions regarding assessment of bilingual Russian-American birth-school age population in order to assist SLPs with determining whether the assessed child presents with a language difference, insufficient language exposure, or a true language disorder. 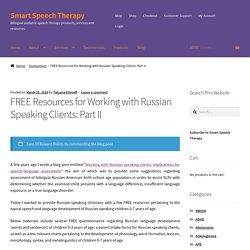 Today I wanted to provide Russian speaking clinicians with a few FREE resources pertaining to the typical speech and language development of Russian speaking children 0-7 years of age. It is, however, important to note that due to the absence of research and standardized studies on this subject much of the below information still needs to be interpreted with significant caution. Classroom Soundboard - ESL Kids Games. Habladll. Difference or Disorder? Understanding Speech and Language Patterns in Culturally and Linguistically Diverse Students - Bilinguistics. Determining whether a student’s speech and language errors result from influences from their native language or whether they are indicative of speech or language impairment is a challenge many educators face. 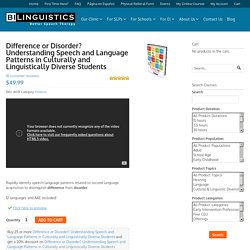 One in every five children in the United States comes from a home in which English is not the primary language. In this book, we compare and contrast English with 12 other languages and African-American English. The information is laid out in charts and diagrams to facilitate the decision-making process about student needs. LD Identification Toolkit Considerations for ELL. The International Guide to Speech Acquisition: 9781418053604: Medicine & Health Science Books @ Amazon.com. Difference or Disorder? Understanding Speech and Language Patterns in Culturally and Linguistically Diverse Students - Bilinguistics. Phonemic Inventories Across Languages. Languages across the world have unique phonemic systems. 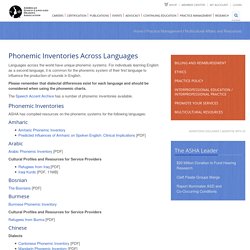 For individuals learning English as a second language, it is common for the phonemic system of their first language to influence the production of sounds in English. Please remember that dialectal differences exist for each language and should be considered when using the phonemic charts. The Speech Accent Archive has a number of phonemic inventories available. Phonemic Inventories ASHA has compiled resources on the phonemic systems for the following languages: Amharic Arabic Arabic Phonemic Inventory [PDF] Little Bird Tales - Home.

Make Images, Videos and Web Stories for Free in Minutes. Write About - Digital Writing for Classrooms. What Does Research Tell Us About Teaching Reading to English Language Learners? As a classroom teacher, I was largely ignorant of, and definitely suspicious of, research. 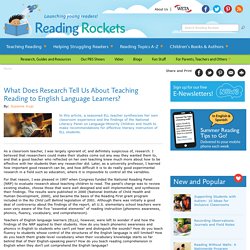 I believed that researchers could make their studies come out any way they wanted them to, and that a good teacher who reflected on her own teaching knew much more about how to be effective with her students than any researcher did. Later, as a university professor, I learned how important good research can be, and how difficult it is to do really good experimental research in a field such as education, where it is impossible to control all the variables.

For that reason, I was pleased in 1997 when Congress funded the National Reading Panel (NRP) to evaluate research about teaching children to read. The panel's charge was to review existing studies, choose those that were well designed and well implemented, and synthesize their findings. Teachers of English language learners (ELLs), however, were left to wonder if and how the findings of the NRP applied to their students. The Advantages of Being Bilingual. Most children have the capacity and facility to learn more than one language. 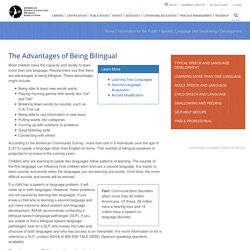 Researchers say that there are advantages to being bilingual. These advantages might include; Learning Two Languages. [en Español] Anyone can learn a new language. 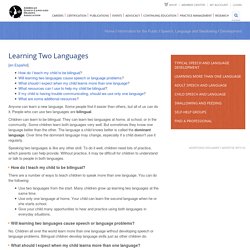 Some people find it easier than others, but all of us can do it. People who can use two languages are bilingual. Children can learn to be bilingual. They can learn two languages at home, at school, or in the community. Speaking two languages is like any other skill. Talk to Your Baby. Research consistently points to early oral language skills as among the strongest predictors of educational success, and as providing a vital foundation for school-readiness and effective learning across other domains. - Nuffield Foundation report into Early Education and Childcare, 2015 The legacy of Talk to Your Baby speaks for itself. 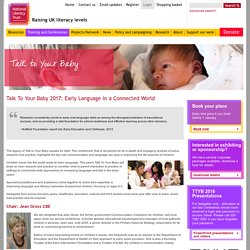 The conference, that is renowned for its in-depth and engaging reviews of policy, research and practice, highlights the key role communication and language can play in improving the life chances of children. Children come into the world ready to learn language. NABE - Home. Home. MLA Language Map. The differences between English and other languages. English-Language-Learner Classification Can Impede Student Growth, Study Finds - Learning the Language. UserID: iCustID: IsLogged: false. 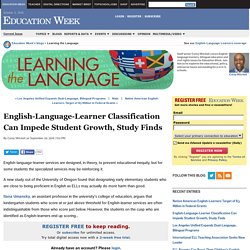 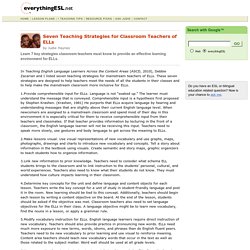 These seven strategies are designed to help teachers meet the needs of all the students in their classes and to help make the mainstream classroom more inclusive for ELLs. 1.Provide comprehensible input for ELLs. Acquiring English as a Second Language: What' s Normal and What' s Not. What's "Normal," What's Not [en Español] By the 2030s, say demographers, English language learners (ELLs) will account for approximately 40% of the entire school-aged population in the United States.

In some areas, that projection is already exceeded-in California, for instance, 60%-70% of schoolchildren speak a language other than English as their primary language. For the period 1995-2005, the Asian population is projected to be the fastest growing group in all U.S. regions, with the greatest gains expected in the West. The Hispanic population will be the second-fastest growing group. General ESL Websites. Strategies%20for%20Culturally%20and%20Linguistically%20Diverse%20Students.pdf.

Bilingualspecialeducation.pdf. Graphic Organizers - Home. Celeste Roseberry. Www.ncshla.org/sites/default/files/springCon/2014/Session 46_Part1.pdf. Www.ncshla.org/sites/default/files/springCon/2014/Session 46_Part2.pdf. Student Language Resources. Interesting Things for ESL/EFL Students (Fun English Study) My Best ELL websites. You can find all of my “Best” lists in broad categories here. The link to that page can also be found at the top right of my blog: My Best Of Series I also have them all on another page where they are listed in the chronological order in which I originally posted them.

You can find that link at the top of my blog by first clicking on About and then scrolling down to Websites of the Year. Two thousand “Best” lists are a lot of best lists! Of course, Control + F on PCs and Command + F on Macs are great ways to search for keywords on those lists when you’re looking for something. In an effort to make them both further accessible and to update many of them, I began posting “Best Lists Of The Week.” I’ve created about sixty-five of them so far and they encompass a few hundred “Best” lists. I hope you find the lists, and the way they’re organized, helpful!

Please note that I continually update and revise all of the lists. ESL Teacher Handouts, Grammar Worksheets and Printables. Free English grammar and vocabulary worksheets and printable handouts, for English language and English as a Second Language (ESL) teachers and instructors to use in the classroom or other teaching environment.