Pi2Go. Pyro Board: 2D Rubens' Tube! Lab3 - Laboratory for Experimental Computer Science. Here we show a little Theremin module which plugs onto a Arduino Board that gives out the tune to a speaker or puts out the tune as control signal like MIDI, Servo etc. 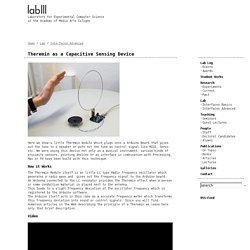 We were using this device not only as a musical instrument, various kinds of proximity sensors, pointing devices or as interface in combination with Processing, Max or Pd have been build with this technique. How it Works The Theremin Module itself is as little LC type Radio frequency oscillator which generates a radio wave and gives out the frequency signal to the Arduino board. An Antenna connected to the LC resonator provides the Theremin effect when a person or some conductive material is placed next to the antenna. This leads to a slight frequency deviation of the oscillator frequency which is registered by the Arduino software. 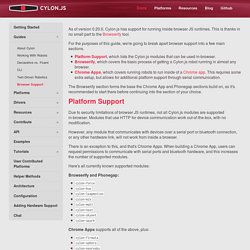 This is thanks in no small part to the Browserify tool. For the purposes of this guide, we're going to break apart browser support into a few main sections. Platform Support, which lists the Cylon.js modules that can be used in-browser. Browserify, which covers the basic process of getting a Cylon.js robot running in almost any browser. Chrome Apps, which covers running robots to run inside of a Chrome app. The Browserify section forms the base the Chrome App and Phonegap sections build on, so it's recommended to start there before continuing into the section of your choice. Platform Support Due to security limitations of browser JS runtimes, not all Cylon.js modules are supported in-browser. However, any module that communicates with devices over a serial port or bluetooth connection, or any other hardware link, will not work from inside a browser.

Wit — Natural language for the Internet of Things. Google/physical-web. Internet Of Things: What's Holding Us Back. The likes of Union Pacific, GE Power & Water, and ConocoPhillips are turning IoT hype into reality, but they want to do more. 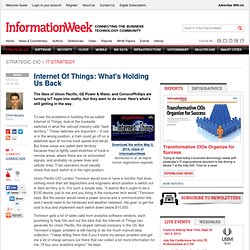 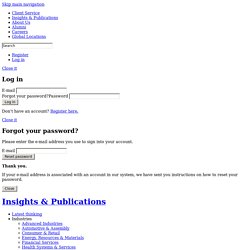 When physical assets equipped with sensors give an information system the ability to capture, communicate, and process data—and even, in a sense, to collaborate—they create game-changing opportunities: production efficiency, distribution, and innovation all stand to benefit immensely. While the consumer’s adoption of fitness bands and connected household appliances might generate more media buzz, the potential for business usage is much greater. Research from the McKinsey Global Institute suggests that the operational efficiencies and greater market reach IoT affords will create substantial value in many industries. 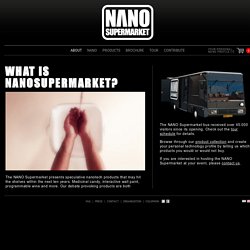 Check out the tour schedule for details. Browse through our product collection and create your personal technology profile by telling us which products you would or would not buy. If you are interested in hosting the NANO Supermarket at your event, please contact us. Internet Of Things. Evaluating Event-Driven Libraries for Arduino. We have been thinking about how to make Ardublock more intuitive and adding event based control blocks seem to be the way to go. 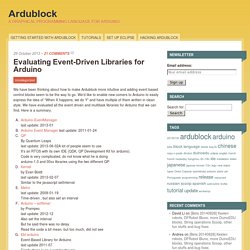 We’d like to enable new comers to Arduino to easily express the idea of “When X happens, we do Y” and have multiple of them written in clean style. We have evaluated all the event driven and multitask libraries for Arduino that we can find. Here is a summary. Arduino-EventManager last update: 2013-01Arduino Event Manager last update: 2011-01-24QP By Quantum Leaps last update: 2013-06-02A lot of people seem to use It’s an RTOS with its own IDE (QDK, QP Development Kit for arduino). 123D Circuits. Design, compile, and simulate your electronic project online. IOThings. Visual Programming IDE’s for IOT (For People who have no Programming Experience) Everyone is excited about Internet of Things. 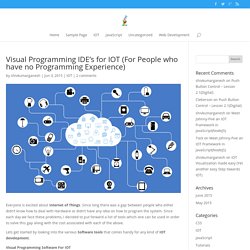 Since long there was a gap between people who either didn’t know how to deal with Hardware or didn’t have any idea on how to program the system. Since each day we face these problems, I decided to put forward a list of tools which one can be used in order to solve this gap along with the cost associated with each of the above. Lets get started by looking into the various Software tools that comes handy for any kind of IOT development. Visual Programming Software For IOT Wyliodrin is a programming environment for all and is pretty easy to get along with. Most of the above software are free and are used widely by programmers with some or no programming experience.