TiddlyWiki. A standard edit dialog on a tiddler TiddlyWiki is an open-source single page application wiki. 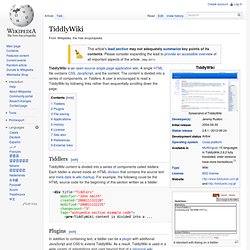 A single HTML file contains CSS, JavaScript, and the content. The content is divided into a series of components, or Tiddlers. Natural Area Code. The Natural Area Code (or Universal Address) is a proprietary geocode system for identifying an area anywhere on the Earth, or a volume of space anywhere around the Earth. 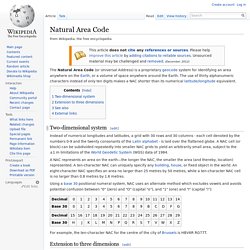 The use of thirty alphanumeric characters instead of only ten digits makes a NAC shorter than its numerical latitude/longitude equivalent. §Two-dimensional system[edit] Instead of numerical longitudes and latitudes, a grid with 30 rows and 30 columns - each cell denoted by the numbers 0-9 and the twenty consonants of the Latin alphabet - is laid over the flattened globe. A NAC cell (or block) can be subdivided repeatedly into smaller NAC grids to yield an arbitrarily small area, subject to the ±1 m limitations of the World Geodetic System (WGS) data of 1984. A NAC represents an area on the earth—the longer the NAC, the smaller the area (and thereby, location) represented. Future Transportation Technology Will Blow Your Mind.

The web performance & security company. RANDOM.ORG - Manual Signature Verification. <p style="background-color:#ffff90;padding: 0em .5em 0em .5em;font-size:.9em"><strong>Warning:</strong> Your browser does not support JavaScript &#8211; RANDOM.ORG may not work as expected</p> RANDOM.ORG's API can digitally sign random data for you, such that it can be proved to originate from our service. 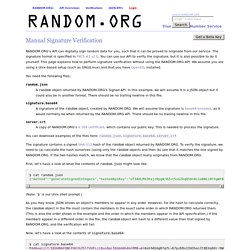 The signature format is specified in PKCS #1 v2.0. You can use our API to verify the signature, but it is also possible to do it yourself. This page explains how to perform signature verification without using the RANDOM.ORG API. Working with Math. First things first. 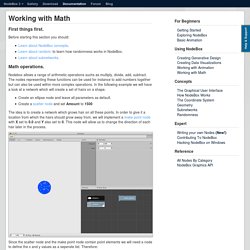 Before starting this section you should: Math operations. Cargomatic plays the role of hero, swooping in to help unclog America’s largest ports. By Michael Carney On March 6, 2015 Southern California ports typically handle 40 percent of all US container imports, and yet, for much of the last year, that flow of imported goods has slowed to barely a trickle. 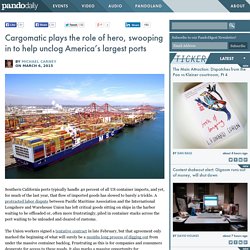 A protracted labor dispute between Pacific Maritime Association and the International Longshore and Warehouse Union has left critical goods sitting on ships in the harbor waiting to be offloaded or, often more frustratingly, piled in container stacks across the port waiting to be unloaded and cleared of customs. The Union workers signed a tentative contract in late February, but that agreement only marked the beginning of what will surely be a months long process of digging out from under the massive container backlog. Plus.google. How To Automate Excel Using Perl for Win32. Developers familiar with using Perl can take advantage of the Automation capabilities in Perl for Win32 to integrate with applications such as Microsoft Office. 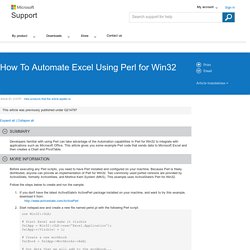 This article gives you some example Perl code that sends data to Microsoft Excel and then creates a Chart and PivotTable. Before executing any Perl scripts, you need to have Perl installed and configured on your machine. Because Perl is freely distributed, anyone can provide an implementation of Perl for Win32. Two commonly used ported versions are provided by ActiveState, formerly ActiveWare, and Mortice Kern System (MKS). This example uses ActiveState's Perl for Win32. Follow the steps below to create and run the sample: Ruling the world with Perl and Excel. Mailinator(tm) Blog: Mailinator launches Private Domains. Get your own (very) private Mailinator ! 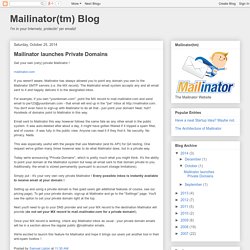 Mailinator.com If you weren't aware, Mailinator has always allowed you to point any domain you own to the Mailinator SMTP servers (i.e. the MX record). The Mailinator email system accepts any and all email sent to it and happily delivers it to the designated inbox. For example, if you own "yourdomain.com", point the MX record to mail.mailinator.com and send email to joe123@yourdomain.com - that email will end up in the "joe" inbox at You don't even have to sign-up with Mailinator to do all that - just point your domain! Neat, huh? Email sent to Mailinator this way however follows the same fate as any other email in the public system. CloudCorner - Your Geolocated Cloud Storage. Lorem Ipsum - All the facts - Lipsum generator. Lorem Ipsum (lipsum) generator, in Perl, using lipsum.com. 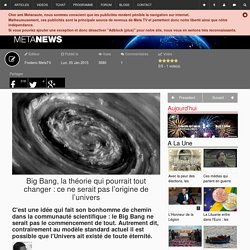 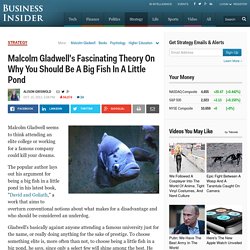 The popular author lays out his argument for being a big fish in a little pond in his latest book, "David and Goliath," a work that aims to overturn conventional notions about what makes for a disadvantage and who should be considered an underdog. Gladwell's basically against anyone attending a famous university just for the name, or really doing anything for the sake of prestige. To choose something elite is, more often than not, to choose being a little fish in a big pond, he says, since only a select few will shine among the best. Éducation bienveillante. Puzzle: Fast Bit Counting. Devise a fast algorithm for computing the number of 1-bits in an unsigned integer. 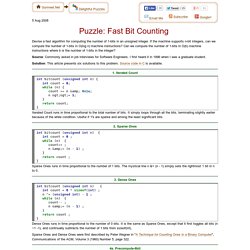 Then they replaced us on the assembly lines, explored places we couldn't get to, even beat our champions at chess. Swarm intelligence. Swarm intelligence (SI) is the collective behavior of decentralized, self-organized systems, natural or artificial. The concept is employed in work on artificial intelligence. The expression was introduced by Gerardo Beni and Jing Wang in 1989, in the context of cellular robotic systems.[1] The application of swarm principles to robots is called swarm robotics, while 'swarm intelligence' refers to the more general set of algorithms. Main Page - BaseX Documentation. Turn Your Dropbox Account Into a WebDAV Server With DropDAV. DropDAV is a nifty service that enables you to use Dropbox with WebDAV clients.

It was developed to work with the iWork suite for the iPad, but it will work with any WebDAV client, so you could also use it to sync OmniFocus through your Dropbox account, for example. It’s simple to set up, although you do need to provide it with your Dropbox username and password to get going. Once set up, you connect to with your WebDAV client and log in using your Dropbox credentials. How to use WebDAV in Pages, Keynote, or Numbers with Dropbox.

Amazon CEO Jeff Bezos wants to ship goods using unmanned aircraft. Some are skeptical, others nervous, but drones already are improving the way we live. Davfs. DAVfs is a Linux file system driver that allows you to mount a WebDAV server as a disk drive. WebDAV is an extension to HTTP/1.1 that allows remote collaborative authoring of Web resources, defined in RFC 4918. Installing DAVfs Install davfs2 from official repositories. Mounting the partition. DeCasteljau Algorithm. Hamburg (Germany), the 19th September 1999. Written by Nils Pipenbrinck aka Submissive/Cubic & $eeN Introduction I learned a nice way to calculate bezier-curves a couple of weeks ago. This algorithm is that nice and easy to understand. So if you ever had problems remembering the basis-matrix of bezier curves don't worry... after this article you'll never need it again. Machine learning.

Elastic map. Heuristics. A*’s ability to vary its behavior based on the heuristic and cost functions can be very useful in a game. Pinguin Software. Hands-on: Tempo brings its super-smart calendaring to iPad. Tempo, a powerful calendar app for the iPhone, goes beyond just displaying events and dates, instead pulling together multiple calendars and contextual data to serve as a digital assistant. It’s a productivity powerhouse on the iPhone, but until now has been missing from the iPad.

This is finally being rectified, as starting on Thursday Tempo is available as a universal app. Expanding the Science and Practice of Gratitude. For too long, we’ve taken gratitude for granted. Yes, “thank you” is an essential, everyday part of family dinners, trips to the store, business deals, and political negotiations. Custom Login Experiences: Credential Providers in Windows Vista. New information has been added to this article since publication.