How Wolves Change Rivers. "Similes and Metaphors" by The Bazillions. Youngest-ever winner of Wordsworth poetry prize. A nine year old pupil at Ambleside Primary School is the youngest ever winner of the Rydal Mount Wordsworth prize for young poets. 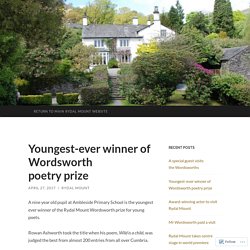 Rowan Ashworth took the title when his poem, Wild is a child, was judged the best from almost 200 entries from all over Cumbria. The fifth annual award, judged by descendants of the poet William Wordsworth, carried an extra cash prize this year of £100. Rowan also collected a trophy, and his poem will be displayed in the drawing room at Rydal Mount where Wordsworth created much of his epic work. The poet’s great great great great grandson, Christopher Wordsworth, who was one of the judges, presented the awards at a special ceremony at Rydal Mount near Ambleside. He said: “My family was so encouraged by the growing number of schools and entries coming in for this competition, which is now in its fifth year. Category winners were Harriet Rush (11 and under) from Windermere School, and Connor O’Hara, 15, who is home schooled.

Parts of an Argument Essay. How to Write an Argumentative Essay by Shmoop. 10 Fun Jobs You Wish You Had. The Science That Made Frankenstein. (Inside Science) -- It has all the makings of a great monster story: an attempt to draw lightning from the sky, a scientist passionate to show that electricity held the secret of life, body parts and, of course, reanimation of the dead. 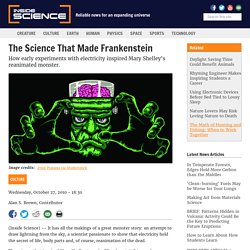 The science that inspired Mary Shelley to write "Frankenstein" is nearly as strange as the novel itself. Written in 1818, the book was influenced by a scientific feud that ushered in the first battery and our modern understanding of electricity. The story begins in the mid-18th century. Frankenstein Part II: Crash Course Literature 206. Don't Reanimate Corpses! Frankenstein Part 1: Crash Course Literature 205. BBC Bitesize - GCSE English Literature - 'Education for Leisure' by Carol Ann Duffy (analysis)

A sad story, briefly told: A poem by Simon Armitage. Psychoanalytic clinicians are no strangers to incomplete narratives: to stories assembled from the bits and pieces of our patients’ unreliable and unsystematic reports about their lives. 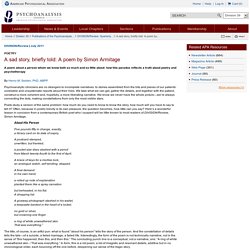 We take what we can get, gather the details, and together with the patient, construct a more coherent and, hopefully, a more liberating narrative. We know we never have the whole picture—we’re always connecting the dots, making constellations from only the most visible stars. Poets study a version of the same problem: how much do you need to know to know the story, how much will you have to say to tell it? Often, because in poetry brevity is its own pleasure, the question becomes, how little can you say? Here’s a wonderful lesson in concision from a contemporary British poet who I suspect will be little known to most readers of DIVISION/Review, Simon Armitage. About His Person Five pounds fifty in change, exactly, a library card on its date of expiry.

Book Review: 'The Outsiders' By S.E. Hinton. Ally Carter is the author of the Gallagher Girls series and Heist Society. 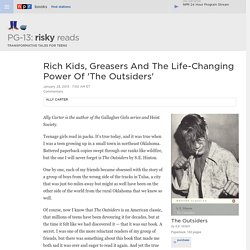 Teenage girls read in packs. It's true today, and it was true when I was a teen growing up in a small town in northeast Oklahoma. Battered paperback copies swept through our ranks like wildfire, but the one I will never forget is The Outsiders by S.E. Hinton. One by one, each of my friends became obsessed with the story of a group of boys from the wrong side of the tracks in Tulsa, a city that was just 60 miles away but might as well have been on the other side of the world from the rural Oklahoma that we knew so well.

Of course, now I know that The Outsiders is an American classic, that millions of teens have been devouring it for decades, but at the time it felt like we had discovered it — that it was our book. "You know she's from Tulsa, don't you? " About His Person Poem by Simon Armitage. ‘Education for Leisure’ by Carol Ann Duffy. Today I am going to kill something. 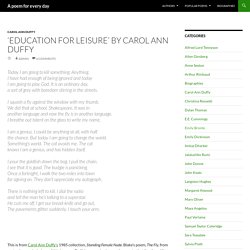 Anything. I have had enough of being ignored and today I am going to play God. It is an ordinary day, a sort of grey with boredom stirring in the streets.I squash a fly against the window with my thumb. We did that at school. Shakespeare. This is from Carol Ann Duffy’s 1985 collection, Standing Female Nude. Education for Leisure is written from the point of view of a young person, who has presumably left school and is on unemployment benefit (every fortnight, he goes into town for “signing on”). An obviously frightening aspect to this character is that he is clearly deluded and probably a psychopath. Meeting at Night: Poem Analysis & Imagery. La Belle Dame Sans Merci read by Ben Whishaw. Book Review: The Outsiders. Book Review The Outsiders.

Dear Future Generations: Sorry. How to Annotate a Poem - Robert Frost "The Road Not Taken" A-Z List of Jobs. Accountant - Accountants and auditors keep track of a company's money; managers look at the accountants' reports to see how well their companies are doing.Actor - Actors perform in stage, radio, television, video, or motion pictures. 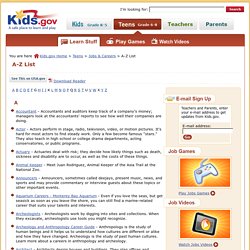 It's hard for most actors to find steady work. Only a few become famous "stars. " Bird Specialist - Ornithologist - Meet wildlife biologist Sarah Stock, who is an ornithologist (a person who studies birds) specializing in owls.Bookkeeping Clerk - Any organization that uses money has to keep records - records of where money came from and where it went; bookkeeping clerks keep and track these financial records.Brain Scientist - Meet Doctor Dave, a scientist who studies the brain and how addiction affects the brain.Budget Analyst - Budget analysts help public and private companies organize their finances. They prepare budget reports and monitor spending. Island Reef Job - Ben Southall. 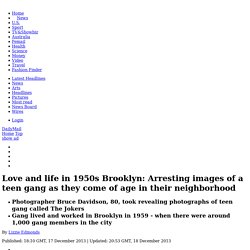 The images are part of a collection called Brooklyn Gang, and were taken by renowned photographer Bruce Davidson, 80, who has dedicated his career to documenting New York City life and culture. This collection is especially interesting as it follows a group of teens, who called themselves the Jokers, who lived in the city in 1959. Brown eyes and blue eyes Racism experiment (Children Session) - Jane Elliott. The outsiders audiobook by s e hinton full unabridged. Daffodils : A Child's Garden of Poetry : Video.