Libra: Facebook launches cryptocurrency in bid to shake up global finance. Facebook has announced a digital currency called Libra that will allow its billions of users to make financial transactions across the globe, in a move that could potentially shake up the world’s banking system. 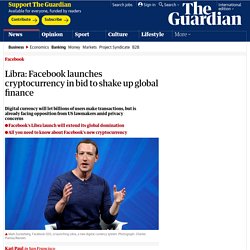 Libra is being touted as a means to connect people who do not have access to traditional banking platforms. With close to 2.4 billion people using Facebook each month, Libra could be a financial game changer, but will face close scrutiny as Facebook continues to reel from a series of privacy scandals. Libra could be a welcome lift to Facebook’s profits: analysts are suggesting Libra could be a huge moneymaker for Facebook, arriving as its growth slows. US lawmakers were quick to raise privacy concerns about the new currency. Shortly after Facebook’s announcement, the congresswoman and chair of the House Financial Services Committee, Maxine Waters, called on the company to put a stop to the project until Congress and regulators could review it.

What Nike Told Me When I Wanted to Have a Baby.

MPs back Brexit delay as votes lay bare cabinet divisions. Brexit is set to be delayed by at least three months, after parliament opted overwhelmingly to request an extension to article 50 on another day of divisive votes that exposed the split in Theresa May’s fractured cabinet. 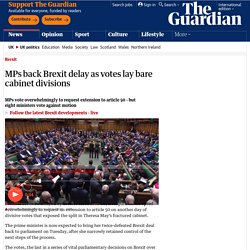 The prime minister is now expected to bring her twice-defeated Brexit deal back to parliament on Tuesday, after she narrowly retained control of the next steps of the process. The votes, the last in a series of vital parliamentary decisions on Brexit over several days, mean that Britain’s departure from the EU should not now take place before 30 June and gave the prime minister a window to resuscitate her plan. But May’s cabinet splintered yet again and eight cabinet ministers, including the Brexit secretary, Steve Barclay, and leader of the house, Andrea Leadsom, voted against the government’s motion extending article 50, preferring to keep the threat of no deal in place. In total, more than half of Tory MPs voted against the motion. We Believe: The Best Men Can Be. Dear Future Generations: Sorry. 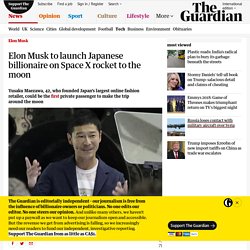 Maezawa, a 42-year-old art collector and entrepreneur who founded Japan’s largest online fashion retailer, could be the first private passenger to make the trip around the moon. The Big Falcon Rocket (BFR) has not yet been built. “This is my lifelong dream,” Maezawa said in a speech on Monday, announcing that he would be inviting artists to join him on his 2023 trip.

“I choose to go to the moon.” Before he introduced Maezawa, Musk outlined his company’s space travel goals, warning of a possible event that could “end civilization”, adding, “We should take action and become a multi-planet civilization as soon as possible.” The announcement comes at a turbulent time for Musk, who has been embroiled in a string of scandals in recent months stemming from his unusual tweets and erratic behavior. James Corden / 'Fear' Is Very, Very Popular with Americans. Trevor Noah /Matt Deitsch and Emma González on Meeting Counterprotesters - Exclusive. Stephen Colbert / This Tweet Trumps All Other Horrible Trump Tweets. Jimmy Kimmel / John David Washington on Dad Denzel, Morgan Freeman & BlacKkKlansman. Jimmy Kimmel / Hashtags: #WhyIGotFired. Ellen Degeneres / Ellen Meets LGBT Activist & Valedictorian Seth Owen. Graham Norton / Tom Hanks Does An Amazing British Accent. 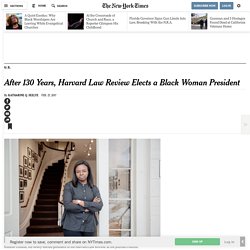 Umana said in an interview, though her fellow students said it was not magic at all but her sharp legal mind, intense work ethic, leadership ability and generosity of spirit that catapulted her to the top. Ms. Umana’s emergence now has raised questions about why it took so long for a black woman to reach the pinnacle of the review and how her perspective may influence a publication that has for most of its existence been led by white men. When Ms. Umana talks about the law, she speaks through the prism of her race and gender. “I’m constantly reminded of people like Natasha McKenna and Tanisha Anderson and Sandra Bland, whose relationships with the law were just simply tragic,” she said. Unlike the vast majority of graduates of the nation’s top law schools, Ms. “A lot of the clients I worked with that summer and since have looked a lot like me,” she said. Born in State College, Pa., Ms. Ms. Anderson Cooper Says Trump's Shithole Countries Remark Is Racist.