Meet the Transhumanist Party: 'Want to live forever? Vote for me' Then there’s perhaps the most important policy of all: how to manage the existential risks of rapid scientific advance: engineered viruses, nano-technology, home-made bio-hacking, and of course, artificial intelligence. 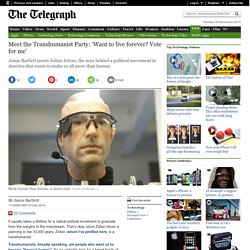 Ray Kurzweil – probably the world’s most famous Transhumanist, who works for Google – thinks "the singularity" (the point at which artificial intelligence becomes so smart that it starts making even smarter versions of itself, leaving us mortals trailing behind) will be with us in 2045. It’s a terrifying prospect. The Transhumanists themselves seem divided, although most agree that it’s at least a possibility this century. No party, argues Zoltan, is thinking properly about any of this, but they could become major threats to civilisation in the near future. Don’t fear the robots, tech creates more jobs than it destroys: report. Inflatable ‘soft robots’ like Baymax may be used in hospitals. For those who thought inflatable technology began and ended with air beds and water wings, think again. 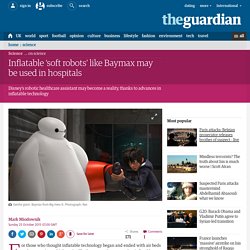 The latest trends suggest that inflatables will soon be taking on important roles in hospitals and farms – as a part of robotics. The vast majority of robots in the world reside in factories – they are solid mechanical machines with arms that can grip, hold objects, and carry out tasks such as assembling, painting, or welding. Their ability to be accurate, reliable and to work 24/7 has long made them attractive to manufacturers and they are now catching the eye of hospital managers who are under increasing pressure to provide services but lack the funds to pay the staff to do them.

Robotic surgical systems have been in use for more than a decade, providing help and increased accuracy for some operations, but they are niche. There are many technical difficulties to be solved before this can happen and a major one concerns the protection of patients. The Cyborg Action Heroine of 'Mad Max' - Lovesick Cyborg : Lovesick Cyborg. The character Imperator Furiosa from “Mad Max: Fury Road” wears a prosthetic in place of her left arm. 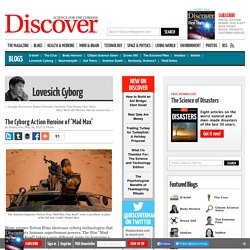 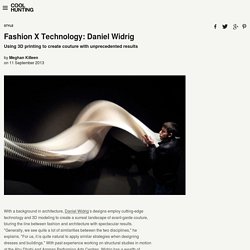 Going back in time with one of Japan’s greatest designers. “Many people will say, well, clothes should be worn: but I think people can look at them in public, like seeing a film,” said Issey Miyake. 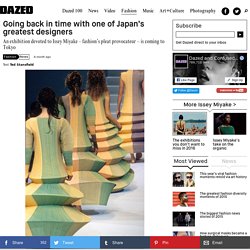 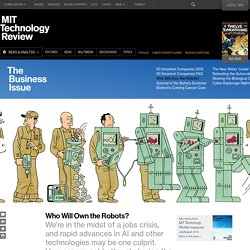 How can we get better at sharing the wealth that technology creates? Editor’s note: This is the third in a series of articles about the effects of software and automation on the economy. You can read the other stories here and here. The way Hod Lipson describes his Creative Machines Lab captures his ambitions: “We are interested in robots that create and are creative.” Lipson, an engineering professor at Cornell University (this July he’s moving his lab to Columbia University), is one of the world’s leading experts on artificial intelligence and robotics.

Lipson’s vision of the future is one in which machines and software possess abilities that were unthinkable until recently. Automation Angst Technology and the Threat of a Jobless Future by Martin Ford Basic Books, 2015. Lucy McRae: Blurring The Lines Between Art, Technology And The Human Form. Few artistic subjects are more fascinating than the human body, and few artists are more talented than Lucy McRae, who works in the space where fashion, technology and the human form overlap. 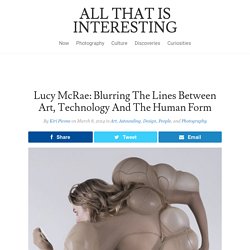 Ditching the restrictive titles that she could easily claim—artist, architect, thinker—Lucy McRae prefers to call herself a Body Architect. Much of McRae’s work takes the natural human silhouette, distorts it, and then recreates that image for an entirely different effect. McRae is trained in classical ballet and interior design, and her diverse background undeniably contributes to her wide range of talents. From wearable art to media to swallowable perfume that releases a genetically unique scent after being consumed, McRae’s headed—or at least been a part of—numerous projects that have explored the relationship between fashion, the human body and technology. As part of the far future design research, she created stretchable electronics and emotion-sensing clothing. Spending review: what it means for tech and science.

Chancellor George Osborne has set out spending plans for the next four years, and science and tech are getting some extra funding -- though not as much as many hoped. 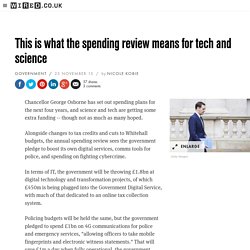 Alongside changes to tax credits and cuts to Whitehall budgets, the annual spending review sees the government pledge to boost its own digital services, comms tools for police, and spending on fighting cybercrime. In terms of IT, the government will be throwing £1.8bn at digital technology and transformation projects, of which £450m is being plugged into the Government Digital Service, with much of that dedicated to an online tax collection system. Policing budgets will be held the same, but the government pledged to spend £1bn on 4G communications for police and emergency services, "allowing officers to take mobile fingerprints and electronic witness statements.

" That will save £1m a day when fully operational, the government said.