Monte-carlo-estimation.meteor. Why I have such a strong negative reaction to #NoEstimates. You may be pleased to learn that this is probably the penultimate thing I have to say here about #NoEstimates. 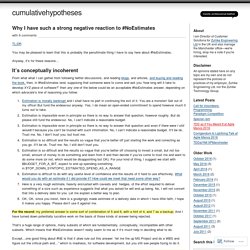 Anyway, it’s for these reasons… It’s conceptually incoherent From what what I can gather from following twitter discussions, and reading blogs, and articles, and buying and reading the book, then, in #NoEstimates land, supposing that someone were to come and ask you “how long will it take to develop XYZ piece of software?” Then any one of the below could be an acceptable #NoEstimates answer, depending on which advocate’s line of reasoning you follow: Dr. Dobb's Agile Update 07/09. The practical realities of software estimation. In IT we are often asked to estimate the expected time/schedule or cost of software development. 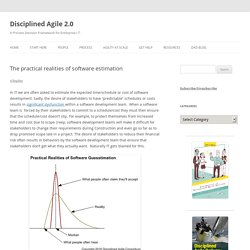 Sadly, the desire of stakeholders to have “predictable” schedules or costs results in significant dysfunction within a software development team. When a software team is forced by their stakeholders to commit to a schedule/cost they must then ensure that the schedule/cost doesn’t slip. For example, to protect themselves from increased time and cost due to scope creep, software development teams will make it difficult for stakeholders to change their requirements during Construction and even go so far as to drop promised scope late in a project.

The desire of stakeholders to reduce their financial risk often results in behaviors by the software development team that ensure that stakeholders don’t get what they actually want. Improving decision-making in projects (and in life) An irony of organisational life is that the most important decisions on projects (or any other initiatives) have to be made at the start, when ambiguity is at its highest and information availability lowest. 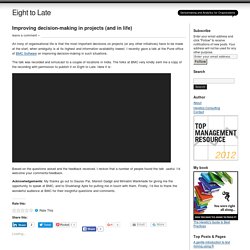 I recently gave a talk at the Pune office of BMC Software on improving decision-making in such situations. The talk was recorded and simulcast to a couple of locations in India. The folks at BMC very kindly sent me a copy of the recording with permission to publish it on Eight to Late. Here it is: Yes, Your Opinion Can Be Wrong. Thursday, July 23, 2015 at 6 a.m. I have had so many conversations or email exchanges with students in the last few years wherein I anger them by indicating that simply saying, "This is my opinion" does not preclude a connected statement from being dead wrong. It still baffles me that some feel those four words somehow give them carte blanche to spout batshit oratory or prose. Stuart Arthur – Software Development Insights. Goading the IT Geek: ...And the battle rages on?

It's 8am here in the UK and I am still simmering over a twitter storm from about 3am my time. 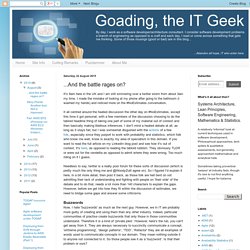 I made the mistake of looking at my phone after going to the bathroom (I washed my hands) and noticed more on the #NoEstimates conversation. It all centred around the heated discussion the other day on #NoEstimates, except this time it got personal, with a few members of the discussion choosing to do the tabloid headline thing of taking one part of some of my material out of context and then basically making libellous inferences. I don't mind a heated debate at all, as long as it stays fair, but I was somewhat disgusted with the actions of a few folk, especially since they purport to work with probability and statistics, which folk who know me well, know is exactly my area of specialism in this domain.

If you want to read the full article on my LinkedIn blog post and see how it's out of context, it's here, as opposed to reading the tabloid rubbish. Buzzwords No? Grow up! Why I hate and love #noestimates. I was watching a No Estimates video that someone tweeted recently and I was reminded why I hate and love No Estimates at the same time. 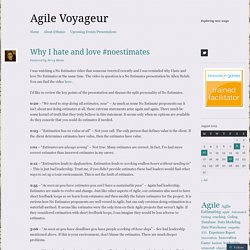 The video in question is a No Estimates presentation by Allen Holub. You can find the video here. I’d like to review the key points of the presentation and discuss the split personality of No Estimates. 0:20 – “We need to stop doing all estimates, now” – As much as some No Estimate proponents say it isn’t about not doing estimates at all, these extreme statements arise again and again. Estimation and Steve McConnell (Again) Steve McConnell recently published 17 theses regarding estimation. 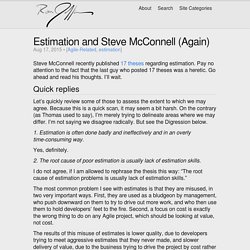 Pay no attention to the fact that the last guy who posted 17 theses was a heretic. Go ahead and read his thoughts. Untitled. Open-mindedness. Untitled. #NoEstimatesBook and #KnowEstimating. An open comment Vasco, Hi Thanks for sharing your book I’ve read Chapter 1, I’m ready for chapter 2 – your condition of supply was to provide comment – here is some. 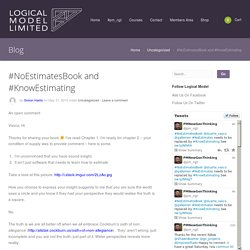 Management is Prediction. Posted on July 14, 2005 Comments (10) re: post on prediction [link broken, so removed] on the Deming Electronic Network: Petter Ogland wrote: …that intelligence more or less boils down to updating a predictive model of the world. 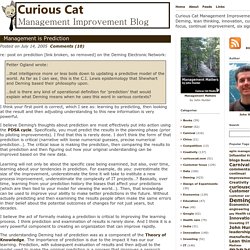 As far as I can see, this is the C.I. Lewis epistemology that Shewhart and Deming based their philosophy upon. …but is there any kind of operational definition for ‘prediction’ that would explain what Deming means when he uses this word in various contexts? I think your first point is correct, which I see as: learning by predicting, then looking at the result and then adjusting understanding to this new information is very powerful. I believe Deming’s thoughts about prediction are most effectively put into action using the PDSA cycle. The Practicing IT Project ManagerThe Practicing IT Project Manager. In a recent blog post, Woody Zuill – fellow blogger, fellow middle-aged software guy, and fellow banjo picker – gave his personal definition of the #NoEstimates Twitter hash tag that has been the venue for a lot of online discussion lately. 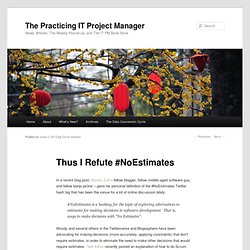 #NoEstimates is a hashtag for the topic of exploring alternatives to estimates for making decisions in software development. That is, ways to make decisions with “No Estimates”. Woody and several others in the Twitterverse and Blogosphere have been advocating for making decisions (more accurately, applying constraints) that don’t require estimates, in order to eliminate the need to make other decisions that would require estimates. Neil Killick recently posted an explanation of how to do Scrum without estimates, including this example: Estimates? We Don’t Need No Stinking Estimates! — Backchannel. How a hashtag lit the nerdy world of project management aflame — or at least got it mildly worked up At 5:53 p.m. on Dec. 10, 2012, Woody Zuill sent out a tweet that read: #NoEstimates — I’ve added a litte more fuel to the fire The tweet linked to a blog post he’d written describing a heretical approach to software development — one that omits the standard step of estimating the time and resources a project will need. 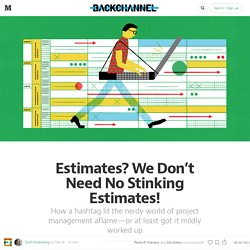 Zuill is a software manager for a home irrigation-products manufacturer in Southern California. His choice of hashtag was no more carefully premeditated than his spelling of “little.” 5 No Estimates Decision-Making Strategies - Software Development Today. Open letter to anti-#NoEstimates people. Dear Peter, Glen, Trevor…and friends, As some of you might already know, I’ve been hanging around in the #NoEstimates hashtag for quite some time. Even before that, before I even noticed that there was a hashtag, I and my team had been practicing a less-no-better-fewer-leaner-estimates kind of software development.

To sum it up, my story is basically that, in a context of co-called “Agile” software development, I was not comfortable with how estimates were done (the whole poker planning thing). Instead of trying to improve our estimation process, to make it more accurate and reliable, which is a path I respect, I, in a Lean-minded attempt, tried to remove estimates as much as possible and use historical data instead. I know that there is a recurring discussion out there about the very definition of what an “estimate” is and the difference there is between “estimate” and “forecast”. #NOESTIMATES UNPLUGGED - A CONVERSATION ABOUT AGILE AS-IF-YOU-MEANT-IT. What is the difference between estimation, extrapolation, prediction and forecasting? The CIO Golden Rule – Talking in the Language of the Business.

There have been many articles lately about different types of CIO’s, particularly one by IBM about CIO’s being split into two classes of leaders; strategic and operational. The topic also continues to be front and center in many CIO conversations and conferences. It’s a topic that I believe is very important, particularly as I continue to observe many examples of people who still don’t understand what the CIO’s real role is: a strategic business leader who focuses primarily on adding business value; whether it’s increased revenue, higher customer satisfaction, new business opportunities, or increased customer retention. To make this happen, a CIO really needs to always be talking the language of the business. Presents State of the Art Practices in Agile Software Development. The Cost of Estimation. Asking for estimates can cost you more than you think.

When you do estimate, take into account time, complexity, and risk. Published on 17 June 2014 by @mathiasverraes. Availability Heuristic. Definition: An availability heuristic is a mental shortcut that relies on immediate examples that come to mind. When you are trying to make a decision, a number of related events or situations might immediately spring to the forefront of your thoughts. As a result, you might judge that those events are more frequent and possible than others. You give greater credence to this information and tend to overestimate the probability and likelihood of similar things happening in the future.

Sick and tired of losing time with Agile estimation. During this last week, I finally had the opportunity to read a book that was on my reading list for long time: Black Swan by Nassim Nicholas Taleb. The book is about uncertainty and unexpected events. NNT (as the author calls himself) explains that we live in an extremely complex world where we cannot predict all the events which will happen, and therefore it is silly to try to plan or predict future outcomes. Throughout the book, he mentions several events that humankind did not dream of that caused terrific outcomes. Even living in this complex world, we always try to plan everything. We always try to predict the future. We humans believe that we are good at forecasting if we do the same task over and over again; we think the more routine the task, the better we learn to forecast… We just forget there is always something non-routine in our complex world that will destroy our forecasts.

All the previous examples can be considered evidence of fantastic waste! Accurate Project Estimation. Effective estimation is one of the toughest challenges software engineers face in their jobs. Regardless of team size, it's important to crisply define, estimate, and distribute work throughout a team. As teams get larger, it becomes even more important to build good habits around planning and estimating work. Lack of planning and estimating reduce confidence in a program, breaks down relationships between the team and the business, and makes development harder on everyone. Rally Community Edition Help.

My views on estimation in Agile projects. (Why planning poker is org smell) - Erronis. Presents State of the Art Practices in Agile Software Development. Systems. Agile Skills Project Wiki. 10 Deadly Sins of Software Estimation Webinar. The Futility of Art Estimation. Artists frequently are often frustrated when asked to estimate how much time a new piece of content will take to build. The problem in asking for time estimates for art is that quality is the large variable in the equation that cannot be fully factored in until something is actually built first. Improved Agile Estimates. #NoEstimates = No Skin in the Game (#NoSkinInTheGame) Facts of Software Engineering Management. Software Engineering 7. Estimates and promises. Consolidating the #Estimates/#NoEstimates Debate.

#NoEstimates is easy. Estimation is a Cruel Mistress. Two Reasons Why Estimates Aren’t Worth It.