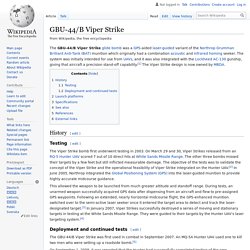 On March 29 and 30, Viper Strikes released from an RQ-5 Hunter UAV scored 7 out of 10 direct hits at White Sands Missile Range. The other three bombs missed their targets by a few feet but still inflicted measurable damage. AGM-122 Sidearm. AIM-9 Sidewinder. The AIM-9 Sidewinder is a short-range air-to-air missile developed by the United States Navy in the 1950s. 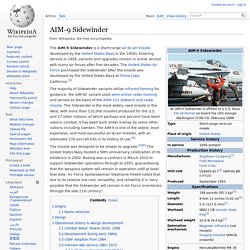 Entering service in 1956, variants and upgrades remain in active service with many air forces after five decades. The United States Air Force purchased the Sidewinder after the missile was developed by the United States Navy at China Lake, California.[3] The majority of Sidewinder variants utilize infrared homing for guidance; the AIM-9C variant used semi-active radar homing and served as the basis of the AGM-122 Sidearm anti-radar missile. The Sidewinder is the most widely used missile in the West, with more than 110,000 missiles produced for the U.S. and 27 other nations, of which perhaps one percent have been used in combat. It has been built under license by some other nations including Sweden. The missile was designed to be simple to upgrade.[5][6] The United States Navy hosted a 50th anniversary celebration of its existence in 2002. 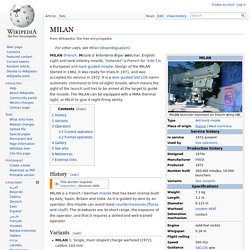 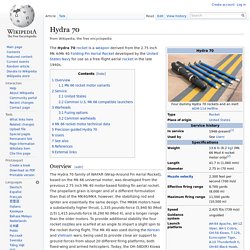 The propellant grain is longer and of a different formulation than that of the MK40/MK4, however, the stabilizing rod and igniter are essentially the same design. The MK66 motors have a substantially higher thrust, 1,335 pounds-force (5,940 N) (Mod 2/3) 1,415 pounds-force (6,290 N) (Mod 4), and a longer range than the older motors. To provide additional stability the four rocket nozzles are scarfed at an angle to impart a slight spin to the rocket during flight.

The Mk 40 was used during the Korean and Vietnam wars, being used to provide close air support to ground forces from about 20 different firing platforms, both fixed-wing and armed helicopters. AGM-114 Hellfire. The AGM-114 Hellfire is an air-to-surface missile (ASM) first developed for anti-armor use, but later models were developed for precision strikes against other target types, such as, in the case of a Predator drone, individuals or groups of individuals. 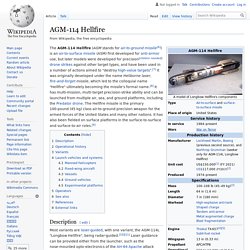 It was originally developed under the name Helicopter Launched, Fire and Forget Missile, which led to the colloquial name 'Hellfire' ultimately becoming the missile's formal name.[2] It has multi-mission, multi-target precision-strike capability, and can be launched from multiple air, sea, and ground platforms. McDonnell Douglas AV-8B Harrier II. The project that eventually led to the AV-8B's creation started in the early 1970s as a cooperative effort between the United States and United Kingdom (UK), aimed at addressing the operational inadequacies of the first-generation Harrier. 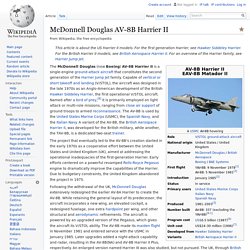 Early efforts centered on a powerful revamped Rolls-Royce Pegasus engine to dramatically improve the capabilities of the Harrier. Due to budgetary constraints, the United Kingdom abandoned the project in 1975. Mark 82 bomb. Development and deployment[edit] With a nominal weight of 500 lb (227 kg), it is the one of the smallest in current service, and one of the most common air-dropped weapons in the world. 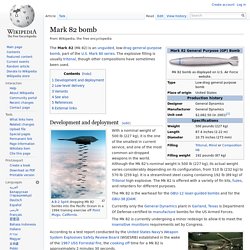 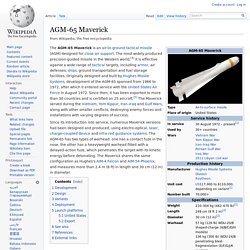 The most widely produced precision-guided missile in the Western world,[4] it is effective against a wide range of tactical targets, including armor, air defenses, ships, ground transportation and fuel storage facilities. Originally designed and built by Hughes Missile Systems, development of the AGM-65 spanned from 1966 to 1972, after which it entered service with the United States Air Force in August 1972.

Since then, it has been exported to more than 30 countries and is certified on 25 aircraft.[5] The Maverick served during the Vietnam, Yom Kippur, Iran–Iraq and Gulf Wars, along with other smaller conflicts, destroying enemy forces and installations with varying degrees of success. Since its introduction into service, numerous Maverick versions had been designed and produced, using electro-optical, laser, charge-coupled device and infra-red guidance systems. AGM-154 Joint Standoff Weapon.

The AGM-154 Joint Standoff Weapon (JSOW) is the product of a joint venture between the United States Navy and Air Force to deploy a standardized medium range precision guided weapon, especially for engagement of defended targets from outside the range of standard anti-aircraft defenses, thereby increasing aircraft survivability and minimizing friendly losses. 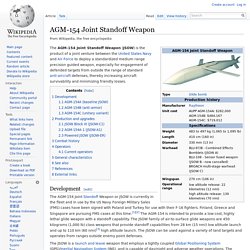 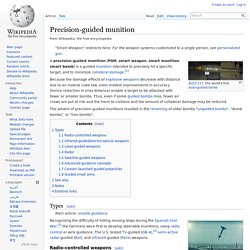 For the weapon systems customized to a single person, see personalized gun. A precision-guided munition (PGM, smart weapon, smart munition, smart bomb) is a guided munition intended to precisely hit a specific target, and to minimize collateral damage.[1] Because the damage effects of explosive weapons decrease with distance due to an inverse cube law, even modest improvements in accuracy (hence reduction in miss distance) enable a target to be attacked with fewer or smaller bombs.

Thus, even if some guided bombs miss, fewer air crews are put at risk and the harm to civilians and the amount of collateral damage may be reduced. The advent of precision-guided munitions resulted in the renaming of older bombs "unguided bombs", "dumb bombs", or "iron bombs". GBU-24 Paveway III. A laser-guided GBU-24 (BLU-109 warhead variant) strikes its target.

GBU-24 Paveway III or simply GBU-24 is a family of laser-guided bombs, a sub-group of the larger Raytheon Paveway III family of weapons. The Paveway guidance package consists of a seeker package attached to the nose of the weapon, and a wing kit attached to the rear to provide stability and greater range. Warhead options consist of: Joint Direct Attack Munition. The Joint Direct Attack Munition (JDAM) is a guidance kit that converts unguided bombs, or "dumb bombs" into all-weather "smart" munitions.

JDAM-equipped bombs are guided by an integrated inertial guidance system coupled to a Global Positioning System (GPS) receiver, giving them a published range of up to 15 nautical miles (28 km). JDAM-equipped bombs range from 500 pounds (227 kg) to 2,000 pounds (907 kg).[1] When installed on a bomb, the JDAM kit is given a GBU (Guided Bomb Unit) nomenclature, superseding the Mark 80 or BLU (Bomb, Live Unit) nomenclature of the bomb to which it is attached. The JDAM is not a stand-alone weapon; rather it is a "bolt-on" guidance package that converts unguided gravity bombs into Precision-Guided Munitions, or PGMs. The key components of the system consist of a tail section with aerodynamic control surfaces, a (body) strake kit, and a combined inertial guidance system and GPS guidance control unit.