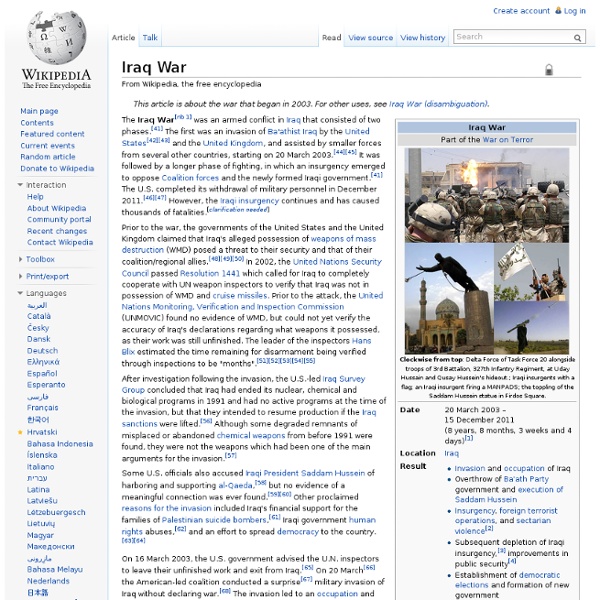 Prior to the war, the governments of the United States and the United Kingdom claimed that Iraq's alleged possession of weapons of mass destruction (WMD) posed a threat to their security and that of their coalition/regional allies.[49][50][51] In 2002, the United Nations Security Council passed Resolution 1441 which called for Iraq to completely cooperate with UN weapon inspectors to verify that Iraq was not in possession of WMD and cruise missiles. Prior to the attack, the United Nations Monitoring, Verification and Inspection Commission (UNMOVIC) found no evidence of WMD, but could not yet verify the accuracy of Iraq's declarations regarding what weapons it possessed, as their work was still unfinished. The leader of the inspectors, Hans Blix, estimated the time remaining for disarmament being verified through inspections to be "months". Background[edit] Iraq disarmament and pre-war intelligence[edit] UN weapons inspections resume[edit] Weapons of mass destruction[edit] Poison gas[edit]

Oklahoma City bombing conspiracy theories A variety of conspiracy theories have been proposed regarding the Oklahoma City bombing. These theories reject all or part of the official government report. Some of these theories focus on the possibility of additional, unindicted co-conspirators or additional explosives planted inside the Murrah Federal building. Other theories allege that government employees and officials, including US President Bill Clinton, knew of the impending bombing and intentionally failed to act on that knowledge. Oklahoma City Bombing[edit] At 9:02 a.m. Although the indictment against McVeigh and Nichols alleged that they conspired with "others unknown to the grand jury", prosecutors, and later McVeigh himself, said the bombing was solely the work of McVeigh and Nichols. Additional conspirators[edit] Additional explosives[edit] US federal government involvement[edit] Investigations[edit] See also[edit] References[edit] Crothers, Lane. Jump up ^ Rogers, J. Further reading[edit] External links[edit] Photographs[edit]

Invasion of Dagestan (1999) The Invasion of Dagestan,[4] also known as the War in Dagestan[5] and Dagestan War,[6] began, when the Chechnya-based Islamic International Brigade (IIB), an Islamist militia, led by warlords Shamil Basayev and Ibn al-Khattab, invaded the neighbouring Russian republic of Dagestan on 2 August 1999, in support of the Shura of Dagestan separatist rebels. The war ended with a major Russian victory and the retreat of the IIB. The Invasion of Dagestan served as the casus belli for the Second Chechen War. Background[edit] During the inter-war period from 1996 to 1999, war-ravaged Chechnya descended into anarchy and economic collapse. In late 1997, Bagauddin Magomedov, the ethnic Avar leader of the radical wing of the Dagestani Wahhabis (Salafism), fled with his entourage to Chechnya. The Invasion and the Russian Counter-Attack[edit] Khattab described himself as the "military commander of the operation" while Basayev was the "overall commander in the battlefield Aftermath[edit] Federal forces[edit]

War in Afghanistan (2001–present) U.S. President George W. Bush demanded that the Taliban hand over Osama bin Laden and expel al-Qaeda. The Taliban requested that bin Laden leave the country, but declined to extradite him without evidence of his involvement in the 9/11 attacks. In 2003, NATO assumed leadership of ISAF, with troops from 43 countries. Though vastly outgunned and outnumbered, the Taliban insurgents, most notably the Haqqani Network and Hezb-e-Islami Gulbuddin, have waged asymmetric warfare with guerilla raids and ambushes in the countryside, suicide attacks against urban targets and turncoat killings against coalition forces. While ISAF continued to battle the Taliban insurgency, fighting crossed into neighboring North-West Pakistan.[31] In 2004, the Pakistani Army began to clash with local tribes hosting al-Qaeda and Taliban militants. Historical background Origins of Afghanistan's civil war Warlord rule (1992–1996) Taliban fighters Taliban Emirate vs Northern Alliance The conflict was brutal. Al-Qaeda

Second Chechen War On 1 October Russian troops entered Chechnya.[23][24] The campaign ended the de facto independence of Chechen Republic of Ichkeria and restored Russian federal control over the territory. Although it is regarded by many as an internal conflict within the Russian Federation, the war attracted a large number of foreign fighters. As of 2009, Russia has severely disabled the Chechen separatist movement and large-scale fighting has ceased. Russian army and interior ministry troops no longer occupy the streets. The once-leveled city of Grozny has recently undergone massive reconstruction efforts and much of the city and surrounding areas have been rebuilt at a quick pace. On 15 April 2009, the counter-terrorism operation in Chechnya was officially ended.[1] As the main bulk of the army was withdrawn, the burden of dealing with the ongoing low-level insurgency mainly fell on the shoulders of the local police force. The exact death toll from this conflict is unknown. Russian Empire[edit]

Fall of Constantinople The Fall of Constantinople (Greek: Άλωση της Κωνσταντινούπολης, Alōsē tēs Kōnstantinoupolēs; Turkish: İstanbul'un Fethi Conquest of Istanbul) was the capture of Constantinople, the capital of the Eastern Roman (Byzantine) Empire, which occurred after a siege by the invading Ottoman Empire, under the command of 21-year-old Ottoman Sultan Mehmed II, against the defending army commanded by Byzantine Emperor Constantine XI Palaiologos. The siege lasted from Friday, 6 April 1453 until Tuesday, 29 May 1453 (according to the Julian calendar), when the city fell and was finally conquered by the Ottomans. The capture of Constantinople (and two other Byzantine splinter territories soon thereafter) marked the end of the Roman Empire, an imperial state which had lasted for nearly 1,500 years.[27] The Ottoman conquest of Constantinople also dealt a massive blow to Christendom, as the Ottoman armies thereafter were free to advance into Europe without an adversary to their rear. Preparations[edit]

Battle of Vienna The battle was won by the combined forces of the Holy Roman Empire and the Polish–Lithuanian Commonwealth, the latter being represented only by the forces of the Crown of the Kingdom of Poland (the march of the Lithuanian army was delayed; as a result they arrived in Vienna after it was relieved[13]). The Viennese garrison was led by Ernst Rüdiger Graf von Starhemberg, an Austrian subject of Leopold I, Holy Roman Emperor. The overall command was held by the commander of the Polish forces, the King of Poland, Jan III Sobieski. The alliance fought the army of the Ottoman Empire and those of Ottoman fiefdoms commanded by Grand Vizier Merzifonlu Kara Mustafa Pasha. It has been suggested by some historians that the battle marked the turning-point in the Ottoman–Habsburg wars, the 300-year struggle between the Holy Roman Empire and the Ottoman Empire[citation needed] {by whom?} Prelude[edit] The Ottoman siege of Vienna Events during the siege[edit] The Ottoman Army erroneously surrounds Vienna.

September 11 attacks The September 11 attacks (also referred to as September 11, September 11th, or 9/11)[nb 1] were a series of four coordinated terrorist attacks launched by the Islamic terrorist group al-Qaeda upon the United States in New York City and the Washington, D.C. metropolitan area on Tuesday, September 11, 2001. Four passenger airliners were hijacked by 19 al-Qaeda terrorists so they could be flown into buildings in suicide attacks. Two of those planes, American Airlines Flight 11 and United Airlines Flight 175, were crashed into the North and South towers, respectively, of the World Trade Center complex in New York City. Within two hours, both towers collapsed with debris and the resulting fires causing partial or complete collapse of all other buildings in the WTC complex, as well as significant damage to ten other large surrounding structures. Background Attackers al-Qaeda The origins of al-Qaeda can be traced to 1979 when the Soviet Union invaded Afghanistan. Osama bin Laden Motives Attacks