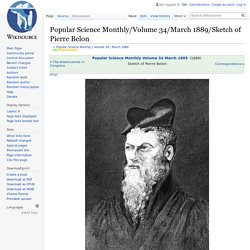 Louis Crié, "Pierre Belon, of Mans, well known by his travels in Italy, Greece, and the East, revealed himself as an observer of great sagacity and as a bold thinker. With him came at once the end of compilation and the beginning of observation. He added to the common treasure of knowledge more wealth than all his predecessors from antiquity and all his contemporaries put together. " M. AramcoWorld : The Busbecq Letters. Ogier Ghiselin de Busbecq. Ogier Ghiselin de Busbecq (1522 in Comines – 28 October 1592; Latin: Augerius Gislenius Busbequius; sometimes Augier Ghislain de Busbecq) was a 16th-century Flemish writer, herbalist and diplomat in the employ of three generations of Austrian monarchs. 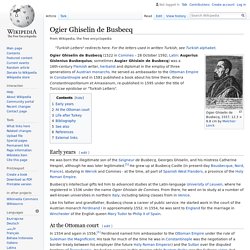 He served as ambassador to the Ottoman Empire in Constantinople and in 1581 published a book about his time there, Itinera Constantinopolitanum et Amasianum, re-published in 1595 under the title of Turcicae epistolae or "Turkish Letters". Early years[edit] Labillardière and the Botany of the Levant. Labillardiere, Jacques Julien Houtton de. 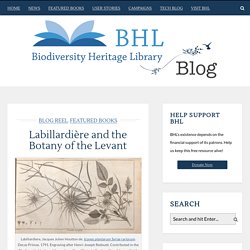 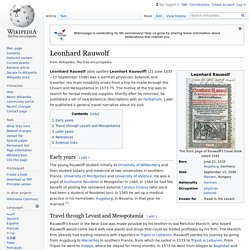 His main notability arises from a trip he made through the Levant and Mesopotamia in 1573-75. The motive of the trip was to search for herbal medicine supplies. Shortly after he returned, he published a set of new botanical descriptions with an herbarium. Later he published a general travel narrative about his visit. Early years[edit] Herbarium L. Rauwolff (1535-1596) in Leiden. The Rauwolf Herbarium: lecture Tinde van Andel. Rauwolf: Unlocking the doors of the Leiden treasure rooms. Which plants are depicted, described or collected in these century-old objects? 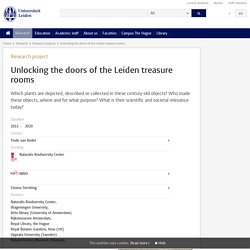 Who made these objects, where and for what purpose? What is their scientific and societal relevance today? The treasure rooms of Naturalis Biodiversity Center and the Leiden University Library contain magnificent old books and herbaria with dried plant specimens, botanical drawings, and thousands of glass jars with roots, seeds and barks, collected from the 16th to the 19th century. 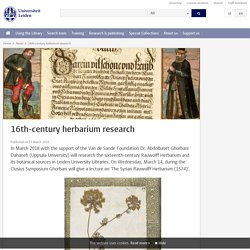 Abdolbaset Ghorbani Dahaneh (Uppsala University) will research the sixteenth-century Rauwolff Herbarium and its botanical sources in Leiden University Libraries. On Wednesday, March 14, during the Clusius Symposium Ghorbani will give a lecture on 'The Syrian Rauwolff Herbarium (1574)'. Joseph Pitton de Tournefort. Joseph Pitton de Tournefort (5 June 1656 – 28 December 1708) was a French botanist, notable as the first to make a clear definition of the concept of genus for plants. 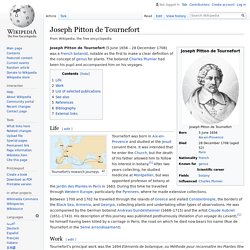 George Wheler (1650-1723) was born in the Netherlands to a royalist English family that had fled Cromwellian England. 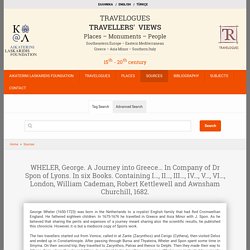 He fathered eighteen children. In 1675-1676 he travelled in Greece and Asia Minor with J. Spon. As he believed that sharing the perils and expenses of a journey meant sharing also the scientific results, he published this chronicle. However, it is but a mediocre copy of Spon's work. Levant. The term entered English in the late 15th century from French.[3] It derives from the Italian Levante, meaning "rising", implying the rising of the sun in the east.[2][4] As such, it is broadly equivalent to the term Al-Mashriq (Arabic: اَلْـمَـشْـرِق‎, [ʔalmaʃriq])[5], meaning "the land where the sun rises". 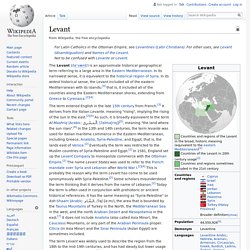 The Levant has been described as the "crossroads of western Asia, the eastern Mediterranean, and northeast Africa",[19] and the "northwest of the Arabian plate".[20] The populations of the Levant[21][22] share not only the geographic position, but cuisine, some customs, and a very long history. They are often referred to as Levantines.[23] Etymology The notion of the Levant has undergone a dynamic process of historical evolution in usage, meaning, and understanding. While the term "Levantine" originally referred to the European residents of the eastern Mediterranean region, it later came to refer to regional "native" and "minority" groups.[27] 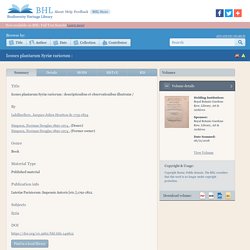 In 1623 a series of 27 Canadian species were given scientific names by C. The John Clayton Herbarium. Catesby. Early eighteenth-century North America was an exotic place for British naturalists to explore. Regular links between London and the New World meant all manner of natural history treasures were being brought back to London. Mark Catesby (? 1682-1749) was one of many naturalists who sent objects from North America to Europe. The Englishman Mark Catesby made his first visit to North America between 1712 and 1715 and resided mainly in Virginia. SciArt Methodology: Mark Catesby. The Natural History of Carolina, Florida, and the Bahama Islands (1729-1771) by Mark Catesby, a self-taught artist and naturalist, was first publication to describe scientifically the flora and fauna of North America.

The first edition, published between 1729-1731, was written and illustrated by Catesby, with the exception of a few plates done by Georg Dionysius Ehret. Catesby arrived May 23, 1722 in Charlestown in the colony of Carolina. A passionate explorer without formal scientific training, he taught himself scientific observation, illustration, and engraving. He describes his scientific and artistic methodology with much humility. Botanica Caroliniana: Catesby. Summary: An evolving digital library focused on the botanical history of the Carolinas. Focuses of research are digital imagery of botanical specimens from the Sloane Herbarium in London, with associated electronic texts, data collections, and indices. This project uses the CITE Infrastructure, developed by the Homer Multitext (C.

Dué & M. Catesby Hortus Siccus and Natural History. Amy Hackney Blackwell, Christopher W. Blackwell. André Thevet. André Thevet (French: [təvɛ]; 1516 – 23 November 1590) was a French Franciscan priest, explorer, cosmographer and writer who travelled to Brazil in the 16th century. History of European botanical discoveries in China (1898) William Bentinck, 1st Earl of Portland. Boym: Flora sinensis. If you are generating a PDF of a journal article or book chapter, please feel free to enter the title and author information. The information you enter here will be stored in the downloaded file to assist you in managing your downloaded PDFs locally. Thank you for your request. Please wait for an email containing a link to download the PDF.