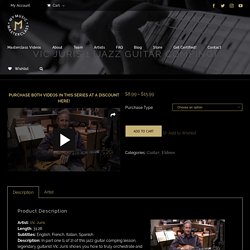 Accordion, he notes, was a far more popular instrument than guitar at that time. All that would change the following year when Beatlemania washed up on the Jersey shore. Juris got his first electric guitar on Christmas of 1964, and by the mid-’60s he was playing cover versions of Jimi Hendrix, Cream and the Temptations material in rock and R&B bands around his area. He discovered jazz in his late teens and subsequently studied with Philly jazz guitar legend Pat Martino. 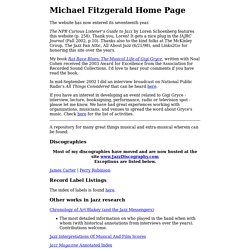 The NPR Curious Listener’s Guide to Jazz by Loren Schoenberg features this website (p. 258). Thank you, Loren! It gets a nice plug in the IAJRC Journal (Fall 2002, p.10). Thanks also to the kind folks at The McKinley Group, The Jazz Fan Attic, All About Jazz (6/21/98), and Links2Go for honoring this site over the years. My book Rat Race Blues: The Musical Life of Gigi Gryce, written with Noal Cohen received the 2003 Award for Excellence from the Association for Recorded Sound Collections. In mid-September 2002 I did an interview broadcast on National Public Radio’s All Things Considered that can be heard here. Sunjump RecordsHome. Joe DiMaggio. © Joe DiMaggio (all rights reserved) Jazz Musician, Songwriter, Singer Hugh Brodie in his home I once walked into a cocktail party of maybe 300 or so people and there was only one person I saw. 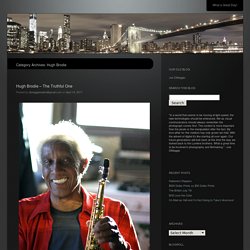 He was a gorgeous gentleman with shock of bright white hair. I worked my way through the party left, right, left, right, and went up to him and said, “Excuse me my name is Joe DiMaggio. I think you’re absolutely gorgeous. I’m a photographer and I would love to do a portrait of you.” The man I’m talking about was Hugh Brodie and that was the beginning of three decades of friendship with Hugh. I photographed Brodie over the years and every time it was totally exciting. 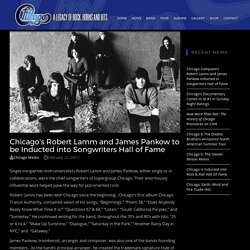 It achieved the enviable feat of placing these hits on the Billboard charts in five different decades. 17 of its first 20 albums were certified platinum, nine of those multiplatinum and Chicago 17 hit platinum a whopping six times. The story of Chicago is one of the most paradoxical in the history of American music. Starting out in the late 1960s as a horn-dominated underground rock band verging on the avant-garde in its use of dissonance, jazz voicings and extended compositions, Chicago initially seemed to have little if any chance of AM radio success. Yet, within a year, the group had three Top 10 singles (“Make Me Smile,” “25 or 6 to 4” and “Does Anybody Really Know What Time It Is”), and were selling out arenas from coast to coast. Jazz in Rochester, NY, 1955-1961 – Noal Cohen's Jazz History Website. I was born (1937), raised, and educated in Rochester, NY. 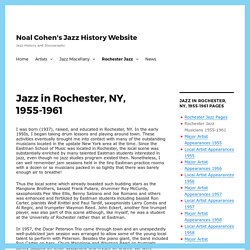 In the early 1950s, I began taking drum lessons and playing around town. These activities eventually brought me into contact with many of the outstanding musicians located in the upstate New York area at the time. Home - Bass Musician Magazine, The Face of Bass. Soros Theme by Mike Andreassi. AlbanyGroup Archive. Wayne Shorter & Herbie Hancock Pen an Open Letter to the Next Generation of Artists - NEST HQ. Wayne Shorter and Herbie Hancock have been friends for over forty years. 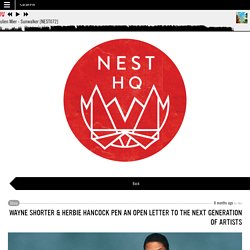 In the pursuit of their art, they’ve shattered boundaries previously believed unbreakable, they’ve revolutionized the concept of innovation, and have chosen to make the endeavor of living compassionately and courageously the center of their lives. From their early days composing and playing together with Miles Davis in Davis’ Second Great Quintet, to branching out and flourishing in their individual endeavors, Wayne and Herbie’s contributions to the world of music have been nothing short of extraordinary. 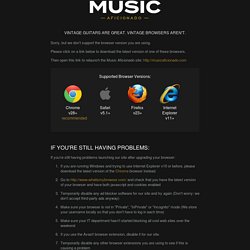 Vintage browsers aren't. Sorry, but we don't support the browser version you are using. Please click on a link below to download the latest version of one of these browsers. Then open this link to relaunch the Music Aficionado site: If you're still having problems: If you're still having problems launching our site after upgrading your browser: If you are running Windows and trying to use Internet Explorer v10 or before, please download the latest version of the Chrome browser instead. 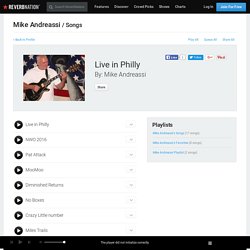 </div><div style="clear:both;"></div></div> Berklee—IASJ Final Concert, Part 2 on Livestream. Jimi Hendrix - June 7, 1970 - Electric Lady Studios - New York, N.Y. Amanda Sedgwick. Other Jazz Web Sites of Interest. HOME. Vibes and Scribes. The accidentals: I think this may be what made Mark stand out the most, though the I’d be hard say it was the number one thing. 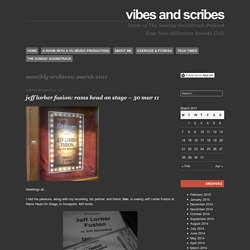 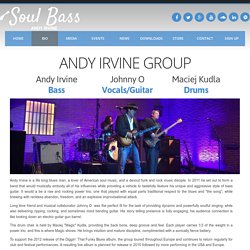 In 2011 he set out to form a band that would musically embody all of his influences while providing a vehicle to tastefully feature his unique and aggressive style of bass guitar. It would a be a raw and rocking power trio, one that played with equal parts traditional respect to the blues and "the song", while brewing with reckless abandon, freedom, and an explosive improvisational attack. Long time friend and musical collaborator Johnny O was the perfect fit for the task of providing dynamic and powerfully soulful singing, while also delivering ripping, rocking, and sometimes mind bending guitar. Milab Microphones - Artists - Rodney Holmes. Rodney Holmes was born in the Bronx in New York City.

It was apparent early on that he had a gift for drawing, and later on painting, and this went hand and hand with his fascination with science fiction and fantasy art, books and films. Rodney assumed that he would grow up to become an illustrator and writer of graphic novels and comic books. Even his early art teachers wanted him to attend an art school for gifted children, but his mother decided not to force him in one direction so early. She wanted Rodney to make that decision for himself when he was old enough. Around The Jazz Internet: Sept. 28, 2012 : A Blog Supreme. Duke Ellington. Dennis Stock. James Dean, New York City, 1955 Photo Dennis Stock/Magnum Photos © Pleasurephoto Miles Davis performance at the Village Vanguard. JUNO Lyrics - LIFE WITHOUT BUILDINGS. It's juno, it's junoi don't wanna be a player, hey, for youfor youi'm gonna raise it, sadness, remember, alreadyi think about, already, hey, for you, for youyour behaviour shy kidyour behaviouri wonder youare you real?

Are you real? For you, sweet thingfor you he wrote no t--? For you he wrote something elseit's juno, it's junoi don't wanna be a player, hey, for youfor youi'm gonna raise it, sadness, remember, alreadyi think about, already, hey, for you, for youyour behaviour shy kidyour behaviouri wonder youare you real? Are you real? For Brothers Jimmy and Tootie Heath, Jazz is a Matter of Love. Jimmy Heath says he's proud of his little brother. "We've got the same genes," Jimmy says during a recent phone interview. "He's 9 years younger than me, but we're close. " Tootie Heath says he's proud of his big brother. "Jimmy's my favorite brother. Always has been," Tootie says, returning the compliment in a phone interview the same day. Group Interaction: a new strategy for understanding the music of Woody Shaw. It is no secret that I am a fan of Woody Shaw. More than any other trumpet player, Shaw’s solos, compositions, his fiery aggressiveness, have always captivated me as both a listener and a trumpet player.

While Shaw’s impact in jazz is well established in pedagogical circles, only a few writers have taken interest in deeper study of Shaw’s work (Gavin 2005), (Prouty 2004) (Richardson 2006), (O’Donnell 2009). The result is that while Shaw’s position in history is unassailable, it is also opaque. Regarded as ‘the last great innovator’, his innovations remain illusive (West 2013). EDDIE "Will" DAVIS. PROFILE: Began playing trumpet in the fifth grade. Took a B.A. in Music Education at Moorehouse College, Masters degree in Jazz Studies at Georgia State, and a Degree in Music & Business at Atlanta Art Institute. Have been playing and performing on stage for 25 years. Il Sibilo Del Silenzio. Best-of-the-rest. Herbie Hancock Crack Abuse. Legendary jazz musician Herbie Hancock has done everything in his career, from his work with Miles Davis in the ‘60s through his growing popularity and influence on hip-hop in the ’70s and ’80s.

But despite his musical icon status, the composer has had his own share of demons. Sibley Music Library - Eastman School of Music. Mugs Up! This building stood on the corner of Gibbs and Main before it was torn down to build Eastman Place (now Miller Center), the building that has housed Sibley Music Library since 1989. Ruth Watanabe. ArchiveGrid : Todd Lowery, trombone [sound recording]. Details. Vibes and Scribes. Wp-content/uploads/MLA_Tribute_Edit.mp3. Percy Jones. John Teleska's Music: Follow the Moon. Reviews. Soul Bass Andy Irvine. Sérgio Mendes signs with OKeh Records. Mar 6, 2014.