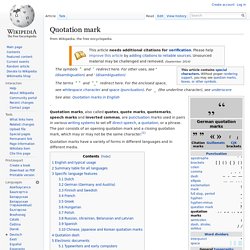 The pair consists of an opening quotation mark and a closing quotation mark, which may or may not be the same character.[1] Quotation marks have a variety of forms in different languages and in different media. English and typical usage[edit] In English writing, quotation marks are placed in pairs around a word or phrase to indicate: In American English and Wikipedia style, double quotes are used normally (the "primary" style). If another set of quotes is nested, double quotes are used again, and they continue to alternate as necessary (though this is rarely done).

Typographically, there are two types of quotation marks: Festival Online Demo. CSTR Home Page. Interactive Sagittal Section. Phonetics Resources (with Domtab) IPA Phones and Phonemes of English For the full IPA alphabet with latest revisions, visit the IPA's own home site, where more information on fonts can also be obtained. 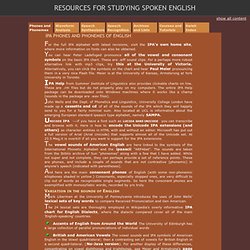 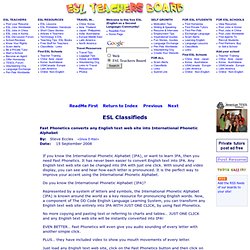 It has never been easier to convert English text into IPA. Any English text web site can be changed into IPA with just one click. With sound and video display, you can see and hear how each letter is pronounced. It is the perfect way to improve your accent using the International Phonetic Alphabet. IPA transcription in Unicode. IPA transcription in Unicode. Look at this: [ə]. 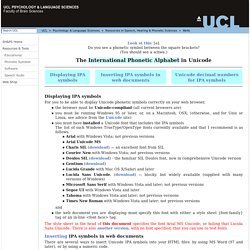 Do you see a phonetic symbol between the square brackets? (You should see a schwa.) Displaying IPA symbols For you to be able to display Unicode phonetic symbols correctly on your web browser, the browser must be Unicode-compliant (all current browsers are) you must be running Windows 95 or later, or, on a Macintosh, OSX; (otherwise, and for Unix or Linux, see advice from the Unicode site)you must have installed a Unicode font that includes the IPA symbols The list of such Windows TrueType/OpenType fonts currently available and that I recommend is as follows. International Phonetic Alphabet chart for English dialects. Automatic English Phonetic Transcription Converter - Free Online Tool to Convert English Text to Phonetic Transcription - American English.

IPA sound generator. I'm very interested in that "synthesizer", too. 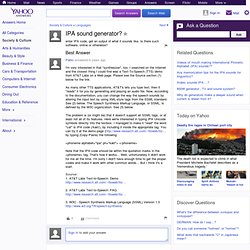 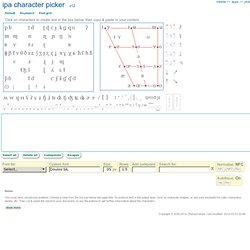 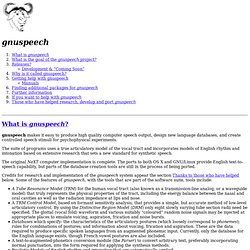 Gnuspeech makes it easy to produce high quality computer speech output, design new language databases, and create controlled speech stimuli for psychophysical experiments. The suite of programs uses a true articulatory model of the vocal tract and incorporates models of English rhythm and intonation based on extensive research that sets a new standard for synthetic speech. The original NeXT computer implementation is complete. Speech. What is gnuspeech? 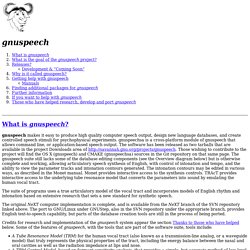 Gnuspeech makes it easy to produce high quality computer speech output, design new language databases, and create controlled speech stimuli for psychophysical experiments. gnuspeechsa is a cross-platform module of gnuspeech that allows command line, or application-based speech output. The software has been released as two tarballs that are available in the project Downloads area of Those wishing to contribute to the project will find the OS X (gnuspeech) and CMAKE (gnuspeechsa) sources in the Git repository on that same page. The gnuspeech suite still lacks some of the database editing components (see the Overview diagram below) but is otherwise complete and working, allowing articulatory speech synthesis of English, with control of intonation and tempo, and the ability to view the parameter tracks and intonation contours generated.

The intonation contours may be edited in various ways, as described in the Monet manual. Download Gnuspeech 0.5 Free - An extensible, text-to-speech package, based on real-time, articulatory, speech-synthesis-by-rules. That is, Gnuspeech converts text strings into phonetic descriptions, aided by a pronouncing dictionary, letter-to-sound rules, rhythm and intonation models; transforms the phonetic descriptions into parameters for a low-level articulatory synthesiser; and uses these to drive an articulatory model of the human vocal tract producing an output suitable for the normal sound output devices used by GNU/Linux. 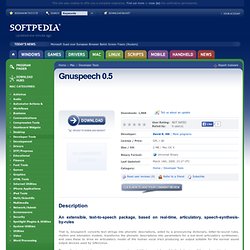 The synthesiser is a tube resonance, or waveguide model that accurately models the behaviour of the real vocal tract. Speech Recognition (ASR) Demo. Vocoder. The vocoder was originally developed as a speech coder for telecommunications applications in the 1930s, the idea being to code speech for transmission. 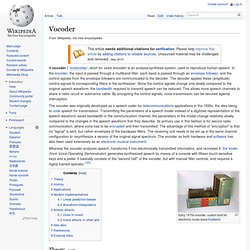 Transmitting the parameters of a speech model instead of a digitized representation of the speech waveform saves bandwidth in the communication channel; the parameters of the model change relatively slowly, compared to the changes in the speech waveform that they describe. Its primary use in this fashion is for secure radio communication, where voice has to be encrypted and then transmitted. The advantage of this method of "encryption" is that no "signal" is sent, but rather envelopes of the bandpass filters.

The receiving unit needs to be set up in the same channel configuration to resynthesize a version of the original signal spectrum. The vocoder as both hardware and software has also been used extensively as an electronic musical instrument. Early 1970s vocoder, custom built for electronic music band Kraftwerk Theory[edit] Speech synthesis. Stephen Hawking is one of the most famous people using speech synthesis to communicate Speech synthesis is the artificial production of human speech. A computer system used for this purpose is called a speech synthesizer, and can be implemented in software or hardware products. A text-to-speech (TTS) system converts normal language text into speech; other systems render symbolic linguistic representations like phonetic transcriptions into speech.[1] The quality of a speech synthesizer is judged by its similarity to the human voice and by its ability to be understood clearly.

Phonetic transcription. Phonetic transcription versus orthography[edit] The pronunciation of words in many languages, as distinct from their written form (orthography), has undergone significant change over time. Pronunciation can also vary greatly among dialects of a language. Traditional orthography in some languages, particularly French and English, often differs from the pronunciation. From text to speech (speech synthesis) Text-to-Speech Voice Download Guide. Translate and Speak. How to Use ImTranslator Translate and Speak • How to translate text and listen to the translation Do the following:• make sure that the Translate check mark box is ON• choose the target language for translation• adjust the speed of the voice• enter text or copy and paste text into the text window• press the Translate & Speak button. Avatars - Create an Animated Talking Character for Your Website.

SitePal is an easy-to-use service that allows you to create a speaking avatar for your website and empower your online communication. Features Include Upload your photo Over 250 customizable stock avatars Record your own voice or use built-in Text-To-Speech in multiple languages Unlimited audio & avatar updates Add an image or video background Built-in lead collection, FAQ, AI chat Publish to HTML page, Flash, emails Compatible with all server technologies Programming skills not required API for advanced users SitePal is a fun and powerful tool. Create your SitePal today and enhance your website! "SitePal has definitely helped us during this economic crisis. Speech Synthesizer - Generator. IPA. IPA character picker 11. Ishida >> apps Character pickers are especially useful for people who don't know a script well, as characters are displayed in ways that aid identification.

See the notes for details. Click on characters to create text in the box, then copy & paste to your content. Hide the top of the page. Start. Linguistics Handbook. Cambridge University Press (1999) The Handbook of the International Phonetic Association was published by Cambridge University Press in July of 1999 and is being regularly reprinted in both hardback and paperback.