Conspiracy Theory. A Massive U.S. Drone Base Could Destabilize Niger — and May Even Be Illegal Under Its Constitution. Late in the morning of October 4 last year, a convoy of Nigerien and American special forces soldiers in eight vehicles left the village of Tongo Tongo. 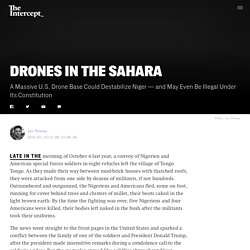 As they made their way between mud-brick houses with thatched roofs, they were attacked from one side by dozens of militants, if not hundreds. Outnumbered and outgunned, the Nigeriens and Americans fled, some on foot, running for cover behind trees and clusters of millet, their boots caked in the light brown earth. By the time the fighting was over, five Nigeriens and four Americans were killed, their bodies left naked in the bush after the militants took their uniforms. The news went straight to the front pages in the United States and sparked a conflict between the family of one of the soldiers and President Donald Trump, after the president made insensitive remarks during a condolence call to the soldier’s widow. The Commercialization and Weaponization of Just About Everything. The commercialization and weaponization of just about everything on Earth has been taking place for a long time. 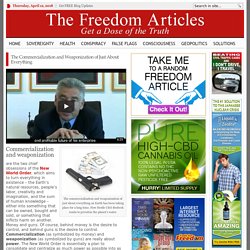 Now Nestle CEO Brabeck wants to privatize the planet’s water. are the two chief obsessions of the New World Order, which aims to turn everything in existence – the Earth’s natural resources, people’s labor, creativity and imagination, and the sum of human knowledge – either into something that can be owned, bought and sold, or something that inflicts harm on another. Inspector General: Awans used "unauthorized access" to transfer Congress' data to stolen server. Deep State – Shadow Government Revealed: Senior Executive Service – American Intelligence Media.

If you would like to hear Betsy and Thomas discuss this topic, please listen here: Obama’s SES Army Found. 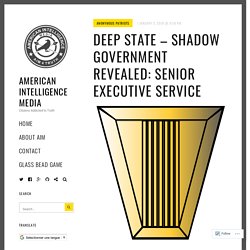 Most people know that a new president gets to name over 4,000 political appointees when they are elected. This political cronyism is partisan politics and fills our bloated government with unqualified employees. The U.S. military is quietly building Skynet. Maybe Elon Musk had a point… The US’s military leaders have agreed on a strategy to guarantee the US military retains its global dominance during the twenty-first century: Connect everything with everything, as DefenseOne describes it. 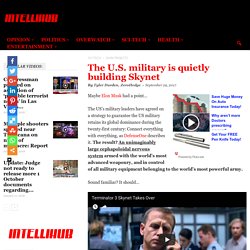 U.S. military invests in 'doomsday genetics' technology. Amid United Nations fears that genetic extinction technology could be used by militaries, a United States military agency has invested $100 million in the doomsday biological technology that can wipe out an entire species. 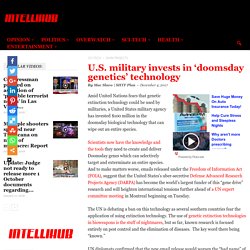 Scientists now have the knowledge and the tools they need to create and deliver Doomsday genes which can selectively target and exterminate an entire species. And to make matters worse, emails released under the Freedom of Information Act (FOIA), suggest that the United States’s uber-secretive Defense Advanced Research Projects Agency (DARPA) has become the world’s largest funder of this “gene drive” research and will heighten international tensions further ahead of a UN expert committee meeting in Montreal beginning on Tuesday.

The UN is debating a ban on this technology as several southern countries fear the application of using extinction technology. Cabal ~ Operation Disclosure. A cabal is a group of people united in some close design together, usually to promote their private views or interests in a church, state, or other community, often by intrigue, usually unbeknownst to persons outside their group. 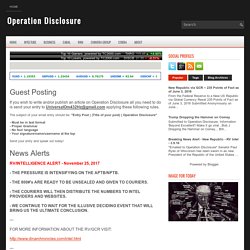 Cabals are sometimes secret societies composed of a few designing persons, and at other times are manifestations of emergent behavior in society or governance on the part of a community of persons who have well established public affiliation or kinship. The term can also be used to refer to the designs of such persons or to the practical consequences of their emergent behavior, and also holds a general meaning of intrigue and conspiracy. The use of this term usually carries strong connotations of shadowy corners, back rooms and insidious influence. How WWIII Was Averted in a Remote Place Called Astana – American Intelligence Media. Take a tour of Astana in this video. 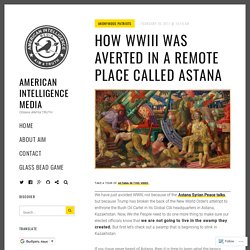 We have just avoided WWIII, not because of the Astana Syrian Peace talks, but because Trump has broken the back of the New World Order’s attempt to enthrone the Bush Oil Cartel in its Global CIA headquarters in Astana, Kazakhstan. Now, We the People need to do one more thing to make sure our elected officials know that we are not going to live in the swamp they created. But first let’s check out a swamp that is beginning to stink in Kazakhstan. If you have never heard of Astana, then it is time to learn what the legacy media is keeping from you. 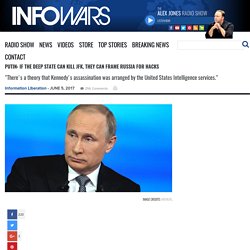 “There’s a theory that Kennedy’s assassination was arranged by the United States Intelligence services,” Putin said. Controlled by the Rothschild Family What in the world is going on. The Republic Has Fallen: The Deep State's Plot To Take Over America Has Succeeded. Submitted by John Whitehead via The Rutherford Institute, 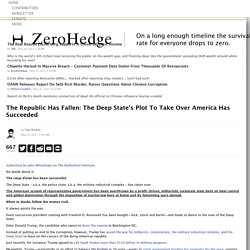 Trump Bows Deeply to Globalists, Surrenders to Puppet Masters. In bowing and groveling before Saudi royalty and the all-powerful Israeli regime and Washington-controlling Israeli lobby, President Donald Trump continues to demonstrate that he is a puppet of globalist masters, the Deep State, and the existing international criminal political establishment. 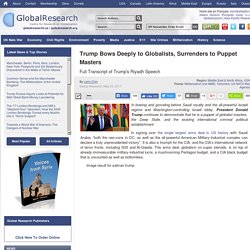 In signing over the single largest arms deal in US history with Saudi Arabia, “both the neo-cons in DC, as well as the all-powerful American Military-Industrial complex can declare a truly unprecedented victory”. Trump's Awkward Photo with Pope Francis Becomes a Horror Movie Meme. Zbigniew Brzezinski, national security advisor and political scientist, dead at 89 — RT America. Zbigniew Brzezinski, national security advisor to former President Jimmy Carter, has died, according to an announcement from his daughter, MSNBC anchor Mika Brzezinski. There was no word of the cause of death. "He was known to his friends as Zbig, to his grandchildren as Chief and to his wife as the enduring love of her life," Mika wrote on Instagram. Brzezinski served as President Carter's national security advisor from 1977 to 1981 and continued to hold influence in foreign policy issues.