The coming era of unlimited — and free — clean energy. Solar energy is ready for primetime. 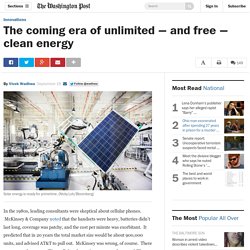 (Nicky Loh/Bloomberg) In the 1980s, leading consultants were skeptical about cellular phones. McKinsey & Company noted that the handsets were heavy, batteries didn’t last long, coverage was patchy, and the cost per minute was exorbitant. It predicted that in 20 years the total market size would be about 900,000 units, and advised AT&T to pull out. McKinsey was wrong, of course. Solar energy that doesn't block the view. A team of researchers at Michigan State University has developed a new type of solar concentrator that when placed over a window creates solar energy while allowing people to actually see through the window. 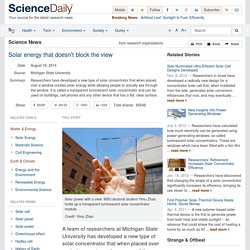 It is called a transparent luminescent solar concentrator and can be used on buildings, cell phones and any other device that has a clear surface. And, according to Richard Lunt of MSU's College of Engineering, the key word is "transparent. " The world's largest solar power plant is now up and running. WakaWaka Base: a Power & Light First Aid Kit by WakaWaka.

[Are you in the Netherlands? 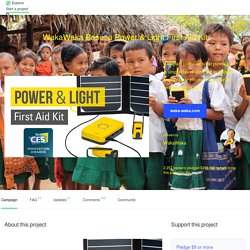 Click here!] The WakaWaka Base is the next step in the evolution of portable solar power. Batteries Included: A Solar Cell that Stores its Own Power. COLUMBUS, Ohio—Is it a solar cell? 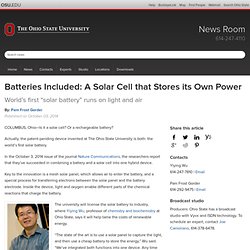 Or a rechargeable battery? Actually, the patent-pending device invented at The Ohio State University is both: the world’s first solar battery. In the October 3, 2014 issue of the journal Nature Communications, the researchers report that they’ve succeeded in combining a battery and a solar cell into one hybrid device. Key to the innovation is a mesh solar panel, which allows air to enter the battery, and a special process for transferring electrons between the solar panel and the battery electrode. Inside the device, light and oxygen enable different parts of the chemical reactions that charge the battery.

The university will license the solar battery to industry, where Yiying Wu, professor of chemistry and biochemistry at Ohio State, says it will help tame the costs of renewable energy. MIT Thinks It Has Discovered the 'Perfect' Solar Cell. A new MIT study offers a way out of one of solar power's most vexing problems: the matter of efficiency, and the bare fact that much of the available sunlight in solar power schemes is wasted. 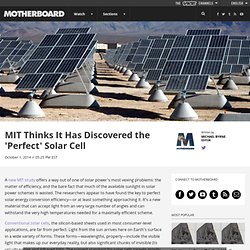 The researchers appear to have found the key to perfect solar energy conversion efficiency—or at least something approaching it. It's a new material that can accept light from an very large number of angles and can withstand the very high temperatures needed for a maximally efficient scheme. Conventional solar cells, the silicon-based sheets used in most consumer-level applications, are far from perfect. Light from the sun arrives here on Earth's surface in a wide variety of forms. These forms—wavelengths, properly—include the visible light that makes up our everyday reality, but also significant chunks of invisible (to us) ultraviolet and infrared light. Big power out, solar in: UBS urges investors to join renewables revolution.

Big power stations in Europe could be redundant within 10-20 years as electric cars, cheaper batteries and new solar technologies transform the way electricity is generated, stored and distributed, say analysts at the world’s largest private bank. 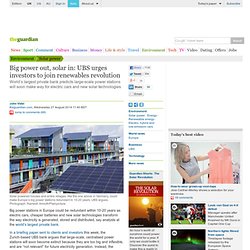 In a briefing paper sent to clients and investors this week, the Zurich-based UBS bank argues that large-scale, centralised power stations will soon become extinct because they are too big and inflexible, and are “not relevant” for future electricity generation. Instead, the authors expect it to be cheaper and more efficient for households and businesses to generate their own energy to power their cars and to store any surplus energy in their own buildings even without subsidies. In language more closely associated with green NGOs, the bank with assets of more than $1.5tn says it expects a paradigm shift away from large-scale conventional power plants.

Solar Cell Efficiency Rises By 30% Through Singlet Fission. Clean Power Published on July 11th, 2014 | by Sandy Dechert July 11th, 2014 by Sandy Dechert Scientists were pretty excited when they discovered you could convert light energy directly into electricity by capturing photons in semiconductors, exciting them into “excitons” (bound electron with negative charge and hole with positive), and capturing the resultant current through electrodes. 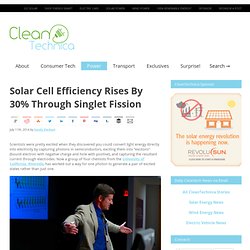 Now a group of four chemists from the University of California, Riverside, has worked out a way for one photon to generate a pair of excited states rather than just one. Christopher Bardeen, chemistry prof at UC Riverside and singlet fission pioneer, speaks at Northwestern’s ANSER Solar Energy Symposium (anser.northwestern.edu) GOOD IDEA: Super Solar Panel Creates Water From Gravity - Arkleus. 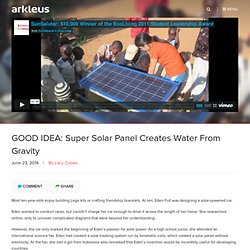 At ten, Eden Full was designing a solar-powered car. Eden wanted to conduct races, but couldn’t charge her car enough to drive it across the length of her home. She researched online, only to uncover complicated diagrams that were beyond her understanding. Solar has won. Even if coal were free to burn, power stations couldn't compete. Last week, for the first time in memory, the wholesale price of electricity in Queensland fell into negative territory – in the middle of the day. 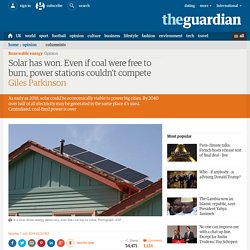 For several days the price, normally around $40-$50 a megawatt hour, hovered in and around zero. Prices were deflated throughout the week, largely because of the influence of one of the newest, biggest power stations in the state – rooftop solar. “Negative pricing” moves, as they are known, are not uncommon. But they are only supposed to happen at night, when most of the population is mostly asleep, demand is down, and operators of coal fired generators are reluctant to switch off.

So they pay others to pick up their output. That's not supposed to happen at lunchtime. The influx of rooftop solar has turned this model on its head. The impact has been so profound, and wholesale prices pushed down so low, that few coal generators in Australia made a profit last year. The answer is no. Coal, of course, will never be free. Lancaster, Calif., Mayor Focuses on Solar Power. Singer Songwriter with Solar/Water powered Tour Bus. 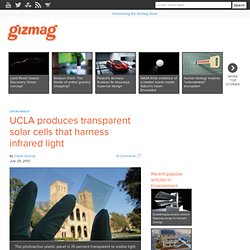 The plastic cells, which use infrared instead of visible light, are also more economical than other types of cells because they are made by an inexpensive polymer solution process and nanowire technology, potentially paving the way for cheaper solar windows. Solar panels are great. The only problem is that they take up quite a bit of space. To run a building off of solar panels you’d pretty much have to cover it with them. Since people like things called “windows,” that’s usually not an option. We’ve looked at the idea of transparent solar panels before, but most solutions until now have been only “sort of” transparent with wires or beads embedded in or coated on glass. Enter Yang Yang, a UCLA professor of materials science and engineering and director of the Nano Renewable Energy Center at the California NanoSystems Institute (CNSI).

Panasonic introduces solar LED lantern and charger for developing regions. Panansonic has revealed its new solar lantern directed at regions that have little or no access to electricity. IKEA starts selling solar panels for homes. STOCKHOLM (AP) — Swedish flat-pack furniture giant IKEA will start selling residential solar panels at its stores in Britain, the first step in its plan to bring renewable energy to the mainstream market worldwide.

The company started selling solar panels made by China's Hanergy in its store in Southampton on Monday. It will sell them in the rest of Britain in coming months, it said. A standard, all-black 3.36 kilowatt system for a semi-detached home will cost 5,700 British pounds ($9,200) and will include an in-store consultation and design service as well as installation, maintenance and energy monitoring service. Solar panels could destroy U.S. utilities, according to U.S. utilities. Solar power and other distributed renewable energy technologies could lay waste to U.S. power utilities and burn the utility business model, which has remained virtually unchanged for a century, to the ground. That is not wild-eyed hippie talk. It is the assessment of the utilities themselves. Back in January, the Edison Electric Institute — the (typically stodgy and backward-looking) trade group of U.S. investor-owned utilities — released a report [PDF] that, as far as I can tell, went almost entirely without notice in the press.

That’s a shame. It is one of the most prescient and brutally frank things I’ve ever read about the power sector. I’ve been thinking about how to convey to you, normal people with healthy social lives and no time to ponder the byzantine nature of the power industry, just what a big deal the coming changes are. So, just a bit of background.

Solar Powered Fuel-Cell. Unveils super-efficient solar-energy technology. Rice University scientists have unveiled a revolutionary new technology that uses nanoparticles to convert solar energy directly into steam. The new “solar steam” method from Rice’s Laboratory for Nanophotonics is so effective it can even produce steam from icy cold water. Details of the solar steam method were published online today in ACS Nano. The technology’s inventors said they expect it will first be used in sanitation and water-purification applications in the developing world. EDITORS ― Links for video and high-resolution images are included at the end of the news release. Jeff Falk 713-348-6775 jfalk@rice.edu.

Researchers report major advance in using sunlight to produce steam without boiling water. (Phys.org)—Rice University scientists have unveiled a revolutionary new technology that uses nanoparticles to convert solar energy directly into steam. The new "solar steam" method from Rice's Laboratory for Nanophotonics (LANP) is so effective it can even produce steam from icy cold water. Details of the solar steam method were published online today in ACS Nano. The technology has an overall energy efficiency of 24 percent. Photovoltaic solar panels, by comparison, typically have an overall energy efficiency around 15 percent. However, the inventors of solar steam said they expect the first uses of the new technology will not be for electricity generation but rather for sanitation and water purification in developing countries.

It's frustrating to still hear dissenters say that renewable energy is not ready to compete with fossil fuels as a means to power our country. The solar industry is growing dramatically every year, while fossil fuels continue to be phased out. Google Invests $80 Million to Open 6 Solar Energy Plants. New solar cell technology captures high-energy photons more efficiently. This Amazing Solar City Produces 4 Times the Energy it Consumes. Modi to Use Solar to Bring Power to Every Home by 2019.