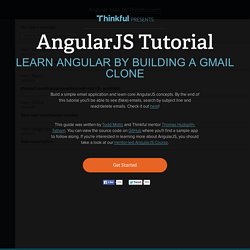 By the end of this tutorial you'll be able to see (fake) emails, search by subject line, and read / delete emails. 5 Awesome AngularJS Features. AngularJS is a great JavaScript framework that has some very compelling features for not only developers, but designers as well! 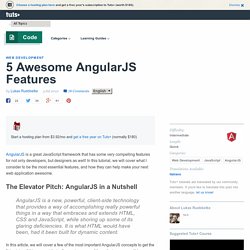 In this tutorial, we will cover what I consider to be the most essential features, and how they can help make your next web application awesome. AngularJS is a new, powerful, client-side technology that provides a way of accomplishing really powerful things in a way that embraces and extends HTML, CSS and JavaScript, while shoring up some of its glaring deficiencies. It is what HTML would have been, had it been built for dynamic content. AngularStrap - AngularJS 1.2+ native directives for Twitter Bootstrap 3.

Angular-app/angular-app. 5 reasons to use AngularJS in the corporate app world. The current situation in the world of corporate apps can be described with one word, chaotic. 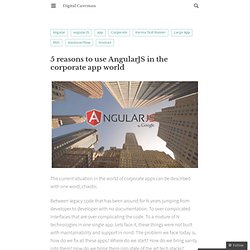 Between legacy code that has been around for N years jumping from developer to developer with no documentation. To over complicated interfaces that are over complicating the code. To a mixture of N technologies in one single app. Lets face it, these things were not built with maintainability and support in mind. The problem we face today is, how do we fix all these apps? This post represents my opinion of why using AngularJS in corporate applications will not only bring sanity to your apps, but it will allow them to evolve into the future. 1) Start little by little In an Enterprise you are probably starting with an ugly brownfield project, not a nice green field.

Developing with AngularJS - Part I: The Basics. There's many, many different introductions to AngularJS available on the internet. 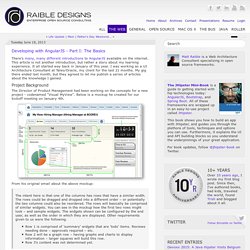 This article is not another introduction, but rather a story about my learning experience. It all started way back in January of this year. I was working as a UI Architecture Consultant at Taleo/Oracle, my client for the last 21 months. My gig there ended last month, but they agreed to let me publish a series of articles about the knowledge I gained. Project Background. Developing with AngularJS - Part I: The Basics. There's many , many different introductions to AngularJS available on the internet. 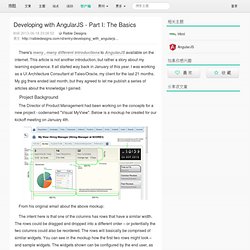 This article is not another introduction, but rather a story about my learning experience. It all started way back in January of this year. I was working as a UI Architecture Consultant at Taleo/Oracle, my client for the last 21 months. My gig there ended last month, but they agreed to let me publish a series of articles about the knowledge I gained. Project Background The Director of Product Management had been working on the concepts for a new project - codenamed "Visual MyView". Html5 - How do search engines deal with AngularJS applications? Toddmotto/angularjs-styleguide.

Angular Best Practice for App Structure (Public) Mgechev/angularjs-style-guide. Johnpapa/angularjs-styleguide. Getting Started with Django Rest Framework and AngularJS. A ReSTful API is becoming a standard component of any modern web application. 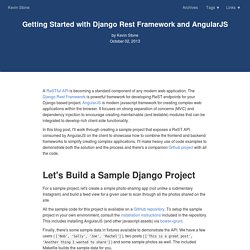 The Django Rest Framework is powerful framework for developing ReST endpoints for your Django based project. AngularJS is modern javascript framework for creating complex web applications within the browser. It focuses on strong separation of concerns (MVC) and dependency injection to encourage creating maintainable (and testable) modules that can be integrated to develop rich client side functionality. In this blog post, I'll walk through creating a sample project that exposes a ReST API consumed by AngularJS on the client to showcase how to combine the frontend and backend frameworks to simplify creating complex applications.

I'll make heavy use of code examples to demonstrate both the solution and the process and there's a companion Github project with all the code. All the sample code for this project is available on a GitHub repository. Couple notes about the sample code: Project Data Layer (the Models) How to Learn AngularJS - Your AngularJS Sherpa. Learning AngularJS can be complex. 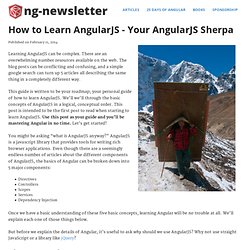 There are an overwhelming number resources available on the web. The blog posts can be conflicting and confusing, and a simple google search can turn up 5 articles all describing the same thing in a completely different way. This guide is written to be your roadmap; your personal guide of how to learn AngularJS. We’ll we’ll through the basic concepts of AngularJS in a logical, conceptual order.

5 surprisingly painful things about client-side JS - The Sourcegraph Blog. Updated: The title of this post previously began “Why we left AngularJS: ...”, but that was removed because these points are generally applicable to single-page JS app frameworks. 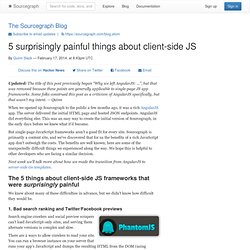 Some folks construed this post as a criticism of AngularJS specifically, but that wasn't my intent. — Quinn When we opened up Sourcegraph to the public a few months ago, it was a rich AngularJS app. The server delivered the initial HTML page and hosted JSON endpoints. AngularJS did everything else. This was an easy way to create the initial version of Sourcegraph, in the early days before we knew what it'd become. A Practical Guide to AngularJS Directives. Directives are the most important components of any AngularJS application. 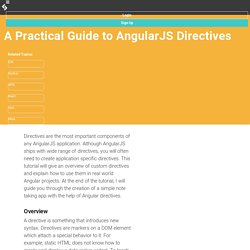 Although AngularJS ships with wide range of directives, you will often need to create application specific directives. This tutorial will give an overview of custom directives and explain how to use them in real world Angular projects. At the end of the tutorial, I will guide you through the creation of a simple note taking app with the help of Angular directives. Overview A directive is something that introduces new syntax. If you’ve written an Angular application before, then you have used directives, whether you realized it or not.

The jQuery Perspective Just imagine how you create a date picker with jQuery. Ng-js. AngularJS. Banging Your Head Against an AngularJS Issue? Try This — nathan leclaire. Have you been debugging something that seems trivial in Angular for so long that your face looks like this? 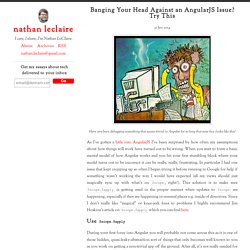 As I’ve gotten a little into AngularJS I’ve been surprised by how often my assumptions about how things will work have turned out to be wrong. When you start to form a basic mental model of how Angular works and you hit your first stumbling block where your model turns out to be incorrect it can be really, really, frustrating. In particular I had one issue that kept cropping up so often I began trying it before running to Google for help if something wasn’t working the way I would have expected (all my views should just magically sync up with what’s on $scope, right?). This solution is to make sure $scope. $apply is getting used in the proper manner when updates to $scope are happening, especially if they are happening in unusual places e.g. inside of directives.

We’re ignoring bounds-checking for the sake of simplicity in this demonstation. You could also invoke scope. An Overview of AngularJS for Managers. A few months ago I started building things in my free time using AngularJS and it has been an incredibly rewarding and productive journey. In my day job, I spend most of my time building single page applications using either Dojo or jQuery. This article is my attempt to make an objective argument that AngularJS is ready for use in building enterprise software. What Breeze can do for You. Right about now you are wondering what Breeze brings that you can’t do on your own. Right about now you are wondering why you should bother learning another technology.

Right about now you are wondering if you should continue to read this post. If you do, you won’t be sorry. Breeze is that valuable to rich web apps. Django REST Framework & AngularJS $resource – Trailing Slash Problem. Benefits of developing Single Page Web Applications using AngularJS - Harbinger Systems. Ng-nuggets: Welcome! Dinis Cruz Blog: Running KarmaJS’s AngularJS example test/e2e/angular-scenario (on Chrome) To learn and get an idea of how Karma (the 'Spectacular Test Runner for JavaScript') works, and how it can be used to create browser automations tests, here are the steps I took to get the test/e2e/angular-scenario example to work. It all started with a clone of: git@github.com:karma-runner/karma.git With this KarmaJS test example (see below), being the one that we are going to use: I then opened an nodejs command prompt and navigated to the folder shown above: ... used node server.js to start a local webserver ... on port 8000:

I ♥ Angular.js - Write Better, Flexible Code By Using Composition In Angular.js. There is an ocean of frameworks out there for single page javascript applications. But one of them stands out in particular. Not only because it does things differently, but it also encourages you to do it differently. That framework is Angular.js POJOs For The Win! In Angular.js, every object (controller, service or factory) you create is a plain-old-javascript-object (POJO). Blazon. Angular in the small. For those of you that aren't familiar, Angular.js is one of a new breed of emerging frameworks dedicated to building rich, responsive in-browser interfaces.

I've had the privilege of working with both Ember.js and Angular.js, and enjoyed them both, so this won't be a showdown (if that's what you came for, here's a nice one). So why Angular? Unlike Ember, Angular's base implementation is a (relatively) svelte 80kb, minified. Angular Tips. AngularJS Best Practices: I’ve Been Doing It Wrong! Part 1 of 3. Angular-gettext. Angular structure: refactoring for growth. October 8, 2013By johnpapa7 As your app grows it becomes even more important to structure it in a way that makes it easy to manage and maintain it. A simple structure by type is easy out of the gate, as the app generally starts with a single set of features. This usually starts as the first module you write. Now fast forward and imagine you are working on an app that has a handful of modules, with dozens of views and controllers. 10 Reasons Web Developers Should Learn AngularJS. Learning AngularJS by Example – The Customer Manager Application - Dan Wahlin. AngularJS.

Jmcunningham/AngularJS-Learning. Jens Rantil's Hideout. Lately I've been working a lot in AngularJS. This is my second project with the framework, and the more time I spend in it, the more I like it. But as with most things, AngularJS has some rough corners. Kickstart Your AngularJS Development with Yeoman, Grunt and Bower.

Whether you love or hate it, there’s no denying that AngularJS is the framework on every developer’s lips. Brian Ford. The AngularJS documentation is great for getting started and for looking up specific API calls. However, it doesn't really tell you how to organize and manage your app as it grows to tens or hundreds of thousands of lines of code. 7 Ways to be Successful with AngularJS. A Better Way to Learn AngularJS. Congratulations on taking the plunge! Ultimate guide to learning AngularJS in one day. AngularJS + Underscore The ultimate web-development toolkit. AngularJS Performance Tuning for Long Lists. Lightweight Angular.js, Javascript Wysiwyg/Text-Editor.