English language: A Changed and Changing Language. Like other languages, English has changed greatly, albeit imperceptibly, so that an English speaker of 1300 would not have understood the English of 500 nor the English of today. 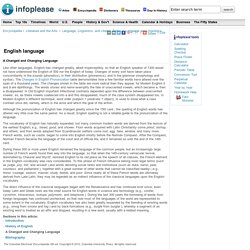 Language change. Introduction This web page is intended for students who are following GCE Advanced level (AS and A2) syllabuses in English Language. 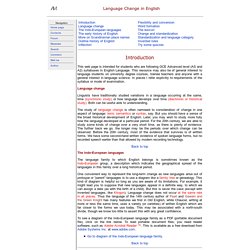 This resource may also be of general interest to language students on university degree courses, trainee teachers and anyone with a general interest in language science. In places I refer explicitly to requirements of the syllabus or mode of examination. Language change Linguists have traditionally studied variations in a language occurring at the same, time (synchronic study) or how language develops over time (diachronic or historical study).

Chronology: History of English. Old, Middle, and Modern English. Language change in spoken English. Influenced by others Language also changes very subtly whenever speakers come into contact with each other. 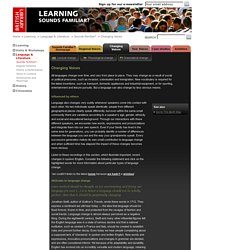 No two individuals speak identically: people from different geographical places clearly speak differently, but even within the same small community there are variations according to a speaker’s age, gender, ethnicity and social and educational background. Through our interactions with these different speakers, we encounter new words, expressions and pronunciations and integrate them into our own speech.

Even if your family has lived in the same area for generations, you can probably identify a number of differences between the language you use and the way your grandparents speak. Every successive generation makes its own small contribution to language change and when sufficient time has elapsed the impact of these changes becomes more obvious. Listen to these recordings in this section, which illustrate important, recent changes in spoken English. Grammar in early modern English. By Edmund Weiner, deputy chief editor, OED This article provides a selection of the main grammatical differences between early modern and late modern English; many more can be found within the OED entries for individual words. 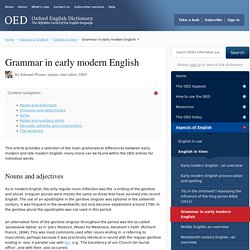 Nouns and adjectives As in modern English, the only regular noun inflection was the -s ending of the genitive and plural: irregular plurals were mostly the same as those that have survived into recent English. The use of an apostrophe in the genitive singular was optional in the sixteenth century; it was frequent in the seventeenth, but only became established around 1700. In the genitive plural the apostrophe was not used in this period. An alternative form of the genitive singular throughout the period was the so-called ‘possessive dative’ as in ‘Job’s Patience, Moses his Meekness, Abraham’s Faith’ (Richard Franck, 1694). In Middle English the group genitive (i.e. the genitive of a complex noun phrase like the king of England) was a split construction, e.g. Verbs. Index of Terms used in 17th Century Wills & Inventories.

History of Methodism The Methodist movement began in 1738, when John and Charles Wesley, the sons of an Anglican Rector, set out to revive a sense of spirituality and inner holiness in worship. 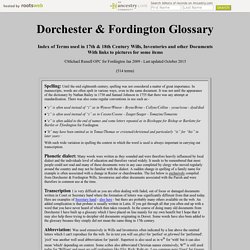 At first, they preached to church congregations and religious societies; then their followers formed themselves into two societies and met at member’s houses. In 1739 George Whitfield, an associate of the Wesley brothers when they were at Oxford, began to preach in the open air, and the Wesley’s followed his example. They accepted the nickname “Methodist” which had been mockingly bestowed upon them at Oxford as a derisive allusion to the methodical manner in which they performed the various practices and that their sense of Christian Duty and Church ritual required. Although they remained members of the established church, they built supplementary preaching houses (Wesley) and tabernacles (Whitefield), and these became grouped into circuits under a Circuit Chapel. a2-level-level-revision, english-language, language-change-0, language-change-0. 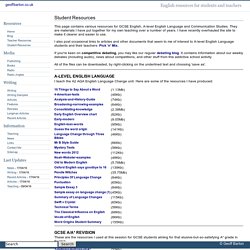 They are materials I have put together for my own teaching over a number of years. I have recently overhauled the site to make it clearer and easier to use. I also post occasional links to articles and other documents that seem to me of interest to A-level English Language students and their teachers: Pick 'n' Mix. If you're keen on competitive debating, you may like our regular debating blog. It contains information about our weekly debates (including audio), news about competitions, and other stuff from this addictive school activity. All of the files can be downloaded, by right-clicking on the underlined text and choosing 'save as'. I teach the A2 AQA English Language Change unit. These are the resources I used at this session for GCSE students aiming for that elusive-but-so-satisfying A* grade in English. Accent & Dialect: Shakespeare: Original pronunciation. ENGLISH LANGUAGE EXAM TECHNIQUE.

Lexical Change - A2 English Language revision. How language changes over time. Beowulf Reading in Old English.wmv. The Lords Prayer in Old English from the 11th century.