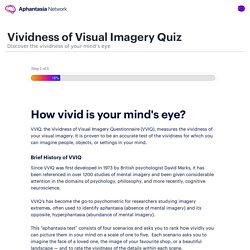 VVIQ is proven to be an accurate test of the vividness for which you can imagine people, objects, or settings in your mind. It is the go-to psychometric for researchers studying extreme imagination, and is often used to identify aphantasia. This “aphantasia quiz” consists of four scenarios and asks you to rank how vividly you can picture them in your mind on a scale of one to five. Each scenario asks you to imagine the face of a loved one, the image of your favourite shop, or a beautiful landscape — and to rate the vividness of the details within each scene. 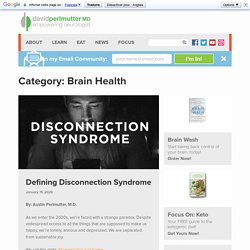 When we fall into this trap of disconnection syndrome, our thinking is biased towards short-term solutions. The impact of this disconnection cannot be overstated. It’s time to make a dramatic change in our thinking, and to get off the disconnection syndrome merry-go-round. Read Next. Teens: this is how social media affects your brain - CNN. Keeping in touch is no longer about face to face, but instead screen to screen, highlighted by the fact that more than 1 billion people are using Facebook every day. 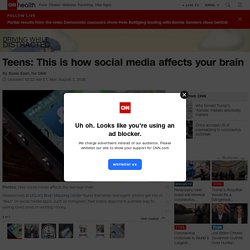 Social media has become second nature -- but what impact is this having on our brain? In a recent study, researchers at the UCLA brain mapping center used an fMRI scanner to image the brains of 32 teenagers as they used a bespoke social media app resembling Instagram. By watching the activity inside different regions of the brain as the teens used the app, the team found certain regions became activated by "likes", with the brain's reward center becoming especially active. "When teens learn that their own pictures have supposedly received a lot of likes, they show significantly greater activation in parts of the brain's reward circuitry," says lead author Lauren Sherman.

"This is the same group of regions responding when we see pictures of a person we love or when we win money. " Peer influence Social learning Changing the brain. Social Media Is Harmful to Your Brain and Relationships. Source: Shutterstock Image purchased by UCLA CNS for Dr. 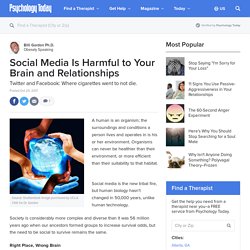 Gordon A human is an organism; the surroundings and conditions a person lives and operates in is his or her environment. Organisms can never be healthier than their environment, or more efficient than their suitability to that habitat. Social media is the new tribal fire, but human biology hasn't changed in 50,000 years, unlike human technology. article continues after advertisement Society is considerably more complex and diverse than it was 56 million years ago when our ancestors formed groups to increase survival odds, but the need to be social to survive remains the same. 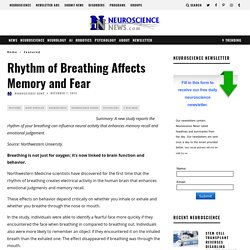 Source: Northwestern University. Breathing is not just for oxygen; it’s now linked to brain function and behavior. Northwestern Medicine scientists have discovered for the first time that the rhythm of breathing creates electrical activity in the human brain that enhances emotional judgments and memory recall. These effects on behavior depend critically on whether you inhale or exhale and whether you breathe through the nose or mouth.

In the study, individuals were able to identify a fearful face more quickly if they encountered the face when breathing in compared to breathing out. The study was published Dec. 6 in the Journal of Neuroscience. The senior author is Jay Gottfried, professor of neurology at Feinberg. The amygdala is strongly linked to emotional processing, in particular fear-related emotions. About this memory research article Abstract. New Finding: Different Types of Exercise Affect Different Parts of Your Brain. By Teal Burrell | Prevent Disease Pumping iron to sculpt your biceps. 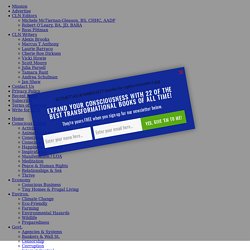 Yoga poses to stretch and relax. Running to whittle your waistline and get fit fast. There are loads of reasons why it’s smart to exercise, and most of us are familiar with the menu of options and how each can shape and benefit your body. But we are discovering that there are numerous ways in which exercise makes you smart too.

That the brains of exercisers look different to those of their more sedentary counterparts is, in itself, not new. But a new chapter is beginning in our understanding of the influence of physical exercise on cognition. Specifically, high-intensity intervals, aerobic exercise, weight training, yoga and sports drills are affect different areas of the brain. They are looking beyond the standard recommendation of 30 minutes of moderate, aerobic exercise a day, for the sake of your brain. “Lifting weights helps improve complex thoughts, problem-solving and multitasking” Craving control Related Posts.