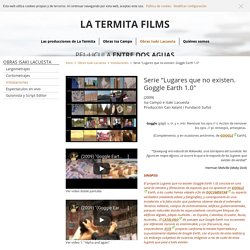 Remover los ojos // s. Acción de remover los ojos. // pl. Polakvanbekkum. A sound recording made at an artificial waterfall in the small river Berkel in the east of the Netherlands. 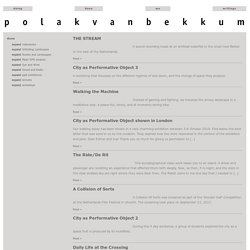 A workshop that focusses on the different regimes of lock down, and the change of space they produce. Instead of gaming and fighting, we traverse the snowy landscape in a meditative way: a peace-full, lonely, and at moments boring hike. Our walking essay has been shown in a very charming exhibition between 3-6 October 2019. Find below the kind letter that was send to us by the curators.

Works - Mishka Henner. James Bridle / Through Other Eyes. With NeMe Art Centre in Limassol, Cyprus, I curated the exhibition Through Other Eyes, exploring non-human vision in the form of both machine intelligence and the more-than-human world of animals and plants. 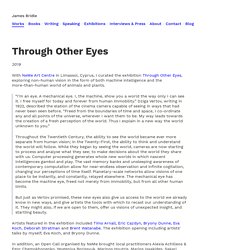 “I’m an eye. A mechanical eye. I, the machine, show you a world the way only I can see it. I free myself for today and forever from human immobility.” Smart Objects. Smart Objects presents Googlegeist: Mirrors Behind The Curtain, a solo exhibition of new work by Chadwick Gibson Over the past fifteen years Google has grown to become a ubiquitous omniscient entity, which has peered into almost every aspect of our public and private lives. 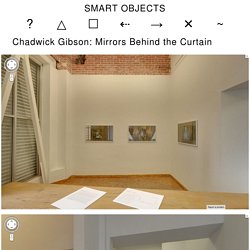 It has documented everything from vast stretches of the earth’s terrain to the most personal emails. The word “Google” suggests a possible answer to almost every imaginable question. Google acts as both all-seeing God and prying Big Brother, a vast repository of objective fact and personal revelation. Gibson’s Mirrors Behind the Curtain (GSV) reveals the self-censored workings of this all-seeing, all-knowing medium. Psychogeography. Postcards from Google Earth. New issue S&S: Surveillance, Performance and New Media Art – The Surveillance Studies Network. Surveillance & Society Vol 7, No 2 (2010) Surveillance, Performance and New Media Art edited by John McGrath and Bob Sweeny The relationship between the visual arts and surveillance has been explored through large scale exhibitions (CTRL:Space, ZKM), and texts such as Loving Big Brother (McGrath, 2004) have introduced questions of performance and performativity into the surveillance debate. 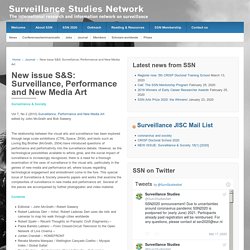 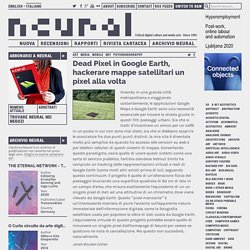 "All streets in time are visited. 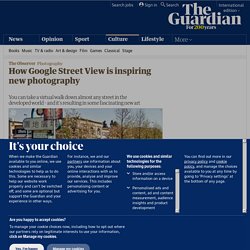 " — Philip Larkin, Ambulances In the pre-computer world of the 1960s, various board games promised "all the thrills and spills" of Formula 1 or football "in the privacy of your own home". There was even a brewer – "Beer at home means Davenports" – offering draught beer without having to go to the pub. This desire for voluntary house arrest has since been so thoroughly sated by the internet that we now expect to be able to get, do and buy almost everything without having to leave our lairs. But who'd have thought that you could be a stay-at-home street photographer? I only became aware of this breakthrough when Michael Wolf (born Germany, 1954) received an honourable mention in the 2011 World Press Photo Awards for work made sitting in front of his computer terminal, photographing – and cropping and blowing up – moments from Google's Street View.

When Wolf got that honourable mention, the response was immediate – and overwhelmingly hostile. Poaching Memories from Google's Wandering Eye - The New York Times. Photo In this past weekend’s issue, Adam Fisher explained Google’s ambitious plan to populate its maps with Street View images from all over the world — even the walls of the Grand Canyon, as seen from the rapids of the Colorado River. 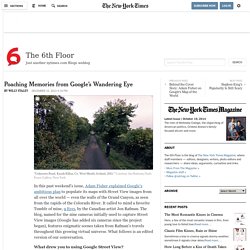 It called to mind a favorite Tumblr of mine, 9 Eyes, by the Canadian artist Jon Rafman. The blog, named for the nine cameras initially used to capture Street View images (Google has added six cameras since the project began), features enigmatic scenes taken from Rafman’s travels throughout this growing virtual universe. What follows is an edited version of our conversation. Week 1 — Sorting Google Street View – Data Mining the City. Google Street View is an amazing archive of the city but has yet to be easily sortable. 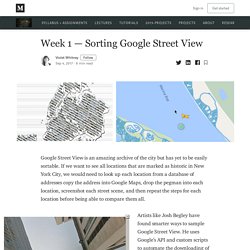 If we want to see all locations that are marked as historic in New York City, we would need to look up each location from a database of addresses copy the address into Google Maps, drop the pegman into each location, screenshot each street scene, and then repeat the steps for each location before being able to compare them all. Artists like Josh Begley have found smarter ways to sample Google Street View. He uses Google’s API and custom scripts to automate the downloading of street view from various locations. 10 Works Of Art Inspired By Google Earth. A NEW AMERICAN PICTURE - A New American Picture depicts American street scenes, located using the internet platform Google Street View. 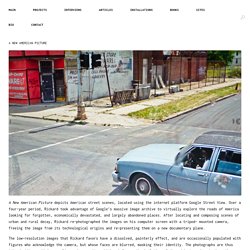 Over a four-year period, Rickard took advantage of Google’s massive image archive to virtually explore the roads of America looking for forgotten, economically devastated, and largely abandoned places. After locating and composing scenes of urban and rural decay, Rickard re-photographed the images on his computer screen with a tripod- mounted camera, freeing the image from its technological origins and re-presenting them on a new documentary plane. The low-resolution images that Rickard favors have a dissolved, painterly effect, and are occasionally populated with figures who acknowledge the camera, but whose faces are blurred, masking their identity. The photographs are thus imbued with an added surrealism and anonymity, which reinforces the isolation of the subjects and emphasizes the effects of an increasingly stratified American social structure.

How Google Street View became fertile ground for artists. On May 25, Google Street View celebrates its 10th birthday. A feature of Google Maps, it lets users explore cities and towns around the world – and even peer inside businesses and government institutions (including the White House). Games have sprouted out of Street View – like Geoguessr, in which players guess where in the world they’ve been randomly placed – while some users have documented funny images captured by the roving cameras of Google’s cars.

But Google Street View has also provided ample fodder for artists of all stripes, inspiring a range of creative works that include photographic curation, music videos and impromptu performances. What, exactly, is it about Google Street View that makes it so appealing to creative types? Perhaps it allows us to experience the fantasy of what scholar Donna Haraway called “the God’s trick” – the impossible desire to see everything. Online Video Aesthetics: Florian Schneider Talks about the Open Source Documentary. Originally published on the Video Vortex #6 conference blog Florian Schneider at Video Vortex. Photo by Anne Helmond German filmmaker, media artist and activist Florian Schneider ambitiously set out to present a mission statement for a novel type of documentary, the open source mode, and launched into a highly theoretical and somewhat cryptic talk that contained a few guidelines on how this transition can be made, but lacked any clear examples or results.

Contingent Cartographies, Fluid Identities, breaking a visual spell. Nine Eyes of Google Street View. “With its supposedly neutral gaze, the Street View photography had a spontaneous quality unspoiled by the sensitivities or agendas of a human photographer.” Google Street View was introduced as a feature of Google Maps in 2007. In the street view that we know today, a user can drop in on a given street almost anywhere in the world and explore stitched together panoramic images. In 2007, Google offered only a selection of streets in the United States and slowly expanded their coverage over the years.

Towards a Postinternet Sublime. This text accompanies the presentation of Nine Eyes of Google Street View as part of the online exhibition Net Art Anthology. In 2007, Google launched Street View, a new feature for Google Maps. IMG MGMT: The Nine Eyes of Google Street View. [Editor’s Note: IMG MGMT is an annual image-based artist essay series. Today’s invited artist, Jon Rafman, lives and works in Montreal, Canada. His work will be featured next month in the exhibition POKE! Artists and Social Media in Houston, Texas, and he is currently working on an experimental narrative about pro fighting game culture. His Kool-Aid Man in Second Life project was featured as AFC’s Best Link Ever on May 15.]

Alice Dalgalarrondo. Images from surveillance cameras, these machines of constant observation, shape a reality that the human eye cannot apprehend in its totality. We cut and invent narratives that fit in the timespace of our perception. Emerging Aesthetic Imaginaries. Using Google Street View to Audit Neighborhood Environments. Media Studies, University of Amsterdam. In 1965, Ed Ruscha photographed Every Building on the Sunset Strip, in a way that may sound familiar to those following the Google Streetview release: Ed Ruscha took the photographs contained in this leporello with a motorized Nikon camera mounted to the back of a pick-up truck. This allowed him to photograph every house on the Sunset Strip while driving – first down one side of the street and then the other.

The pictures were then pasted in order, and the individual buildings were labeled with their respective house numbers. There is so much to say about Streetview, luckily most of it does not involve any of the weird captures that have been all the rage lately (rivaling Loltheorists? No, but still pretty big). In an article at Slate, Michael Agger makes a very interesting point about Streetview, namely that it confronts us with an America that is perhaps not in line with previous perceptions. [T]he streets of America are not exactly … alive. Street View and Beyond: Google's Influence on Photography. When Google Street View started as an experiment in 2007, the company sent SUVs equipped with cameras, GPS and lasers to collect its first pictures.