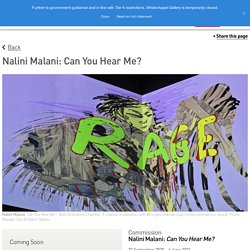 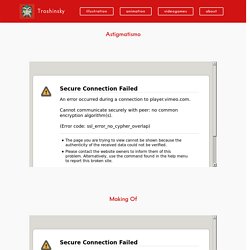 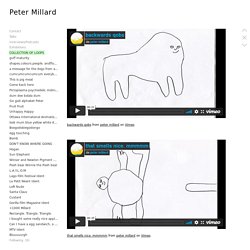 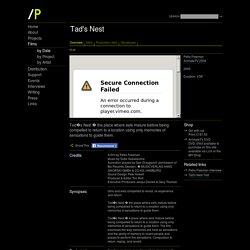 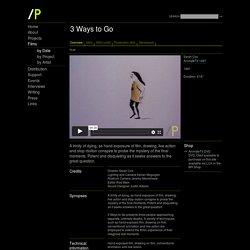 Potent and disquieting as it seeks answers to the great question. 3 Ways to Go presents three people approaching separate, untimely deaths. Technical information Hand-exposed film, drawing on film, conventional animation and live action. Full credits. Catherine Anyango Grünewald. Last Seen is a series of graphite drawings made with both direct and indirect reference to CCTV footage and police photography of the last known recorded image of a person before or at their disappearance or death. 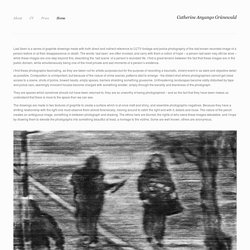 The words ‘last seen’ are often invoked, and carry with them a notion of hope – a person last seen may still be alive – while these images are one step beyond this, describing the ‘last scene’ of a person’s recorded life. I find a great tension between the fact that these images are in the public domain, while simultaneously being one of the most private and sad moments of a person’s existence. I find these photographs fascinating, as they are taken not for artistic purposes but for the purpose of recording a traumatic, violent event in as stark and objective detail as possible.

The drawings are made in two textures of graphite to create a surface which is at once matt and shiny, and resemble photographic negatives. Where is Eva Hipsey? Avish Khebrehzadeh: All the White Horses. Suky Best Interview on 54 Morning Lane. An Afternoon With Michel Gondry. Drawing Lesson Four: Practical Epistemology: Life in the Studio. Animate Projects - Video Mappings: Aida, Palestine IV (Ways to the Hospital) The artist Till Roesken asked the inhabitants of the Aida camp in Bethlehem to draw maps of their surroundings. 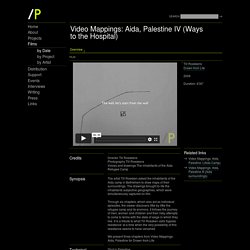 The drawings brought to life the inhabitants subjective geographies, which were simultaneously captured on film. Through six chapters, which also act as individual episodes, the viewer discovers little by little the refugee camp and its environs. It follows the journey of men, women and children and their risky attempts to come to terms with the state of siege in which they live. Corrie Francis Parks, A Tangled Tale. Magnetic Movie. 54 Morning Lane. 2010, small monitor installation, each 1 min 30 secs (approx) looping with sound Four scenes each just over a minute long showing a collage of filmed owls placed on top of a scene from a British film of the 1940’s (This Happy Breed 1941). 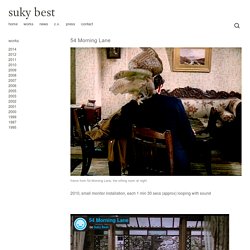 In each scene owls appear and disappear. The work comes from ideas of transgressive animals within children’s fiction, especially Beatrix Potter’s, A Tale of Two Bad Mice, 1902 where two mice enter a dolls house, and, finding all the food to be fake, smash it up in anger and disappointment The room, a film set, is used as a constructed fictional space, like a dolls house but for adults. The collage is deliberately crude to allow a space for the viewer to fill in the gaps and make the scene more real; what they are watching isn’t real. 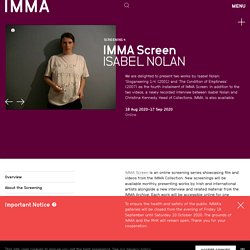 While Sloganeering 1-4 (2001) has been part of the IMMA Collection since 2002, The Condition of Emptiness (2007), was acquired more recently as part of a major donation of the Kerlin Gallery Collection to the museum in 2018. In addition to the two videos, a recently recorded interview between Isabel Nolan and Christina Kennedy, Head of Collections, IMMA, is also available further down this page. Alongside this, a series of recordings relating to Nolan’s work from the IMMA Audio Archive are available in the ‘Additional Resources’ section. These include the audio work titled The Three Body Problem (2014), a conversation between Nolan and writer Sally O’Reilly and an introduction by curator Karen Sweeney to Isabel’s 2014 solo exhibition at IMMA, titled The weakened eye of day.

About the works: The work explores the line between the desire for self-seclusion and its associated anxieties. Random Acts - My Mother’s Eyes - Jenny Wright 2019. Animate Projects - Rotting Artist. Animate Projects Rotting Artist Ann Course Paul Clark AnimateTV 20022002Duration: 3'10" People try it on in the Croxley bunkers, and when the head of the household shoves his bendy cane brush right up the chimney we would do well to run to the other side of the road and watch it appear out the top for the lucky sight of it. 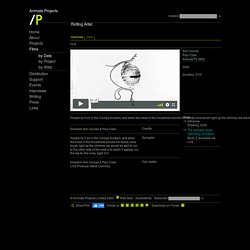 Staff Pick Premiere: "Facing It" by Sam Gainsborough - Vimeo Blog. According to the World Health Organization, 1 in 13 people suffer from social anxiety, and today’s brilliant Staff Pick Premiere — “Facing It” from director Sam Gainsborough — turns this common stress response inside out using visually dynamic claymation design. In the film, we see a young man sitting at a bar contemplating whether to strike up a conversation with a crowd of happily chatting people.

As he reflects on his past, he finds that the apple doesn’t fall far from the tree, and that his self-conscious parents discouraged him from fully expressing himself. Using seamless animation, Gainsborough shines a light on the inner torment of having social anxiety, bringing this common condition the exposure and empathy it deserves. Joan Gratz Primal Flux (excerpt) Joan Gratz Night Weaver (excerpt)

Joan Gratz, Mona Lisa Descending a Staircase. 09 Aleksandra Korejwo Carmen Torero 1996. Ferenc Cakó – Fluid Frames: Experimental Animation with Sand, Clay, Paint, and Pixels. Where he calls home: Hungry Fluid Frame Technique: Sand #ProTip: I usually do several minutes longer than what is required, because improvisation gives freshness to the whole. I divert in many directions both in thought and form, and that’s when the good ideas are born. – An interview with Ferenc Cakó.

I'd never seen the films, and never expected to see them, so it was a surprise and a delight to be able to see them. Who is Walter Ruttmann? Even if you've never heard of him, watching the films should at least remind you of someone: Oskar Fischinger, who saw the first film at its premiere in 1921 in Frankfurt and went on carry on the flame of these pioneering films with his own Studien and other abstract films. I first learned about the interaction between these two seminal figures of abstract animation when reading the late William Moritz's Optical Poetry: The Life and Work of Oskar Fischinger, which appeared last year.