New Zealand’s Advance Preview of a Post-Coronavirus World. The Australia Letter is a weekly newsletter from our Australia bureau. 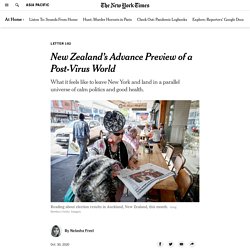 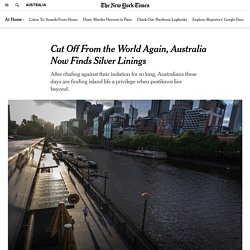 Paul Getty Museum in Los Angeles, said it pointed to how the pandemic was making people more thoughtful users of time and space. Maybe fewer options and more planning will “liberate our minds,” he said. Technology, he added, will save Australia from fully retreating into itself. He said he had been frequenting museum collections online, while also using the time gained from a lack of travel to explore new realms — such as Nordic crime dramas. Ms. In Mexico, Cross-Border Fight Over Water Erupts. “These tensions, these tendencies, are already there, and they’re just made so much worse by climate change,” said Christopher Scott, a professor of water resources policy at the University of Arizona. 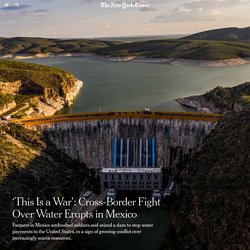 “They are in a fight for their lives, because no water, no agriculture; no agriculture, no rural communities.” Since February, when federal forces first occupied the dam to ensure water deliveries to the United States continued, activists in Chihuahua have burned government buildings, destroyed cars and briefly held a group of politicians hostage. For weeks, they’ve blocked a major railroad used to ferry industrial goods between Mexico and the United States. Top universities ‘not being chosen by low-income students’ Poorer students with good A-level grades are significantly more likely to opt for less prestigious universities than those with similar results from more advantaged backgrounds. 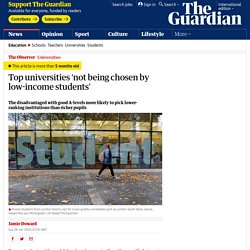 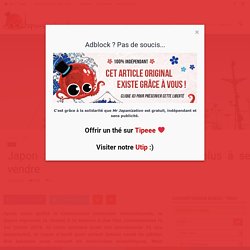 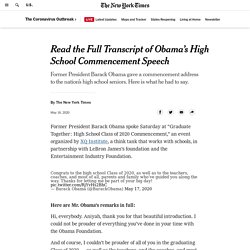 Here are Mr. Obama’s remarks in full: Hi, everybody. Aniyah, thank you for that beautiful introduction. Hong Kong: arrest of 750 children during protests sparks outcry. Hong Kong officials have revealed that 750 of the protesters arrested during four months of unrest are children, sparking outrage in the city, as anger continues to grow over the government’s increasingly hardline measures against demonstrators. 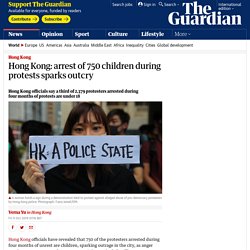 The semi-autonomous city’s number two official Matthew Cheung said at a press conference on Thursday it was “shocking and heartbreaking” that 750 out of the 2,379 people arrested – or nearly a third – since June were under 18, and 104 were under 16. Cheung appealed to parents and teachers to admonish youngsters and tell them to refrain from “illegal or violent acts” and avoid getting injured or arrested, something that would “end up destroying [their] future”. The high proportion of children arrested sparked outrage in the community. Au Venezuela, rassemblements des pro et anti-gouvernement après la panne d’électricité. Students Skip School Across Europe to Demand Climate Action. Traditional Masculinity Can Hurt Boys, Say New A.P.A. Guidelines. The money, job, marriage myth: are you happy yet? Brexit explained: What the X@X!# is happening NOW?! Is Geotagging on Instagram Ruining Natural Wonders? Some Say Yes.

Paris protests tear-gassed by police. The "yellow vest" protests, which began as a campaign against rising gas prices, have morphed into a wider demonstration against the government of President Emmanuel Macron in recent weeks. 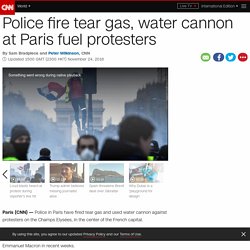 Police say they have mobilized 3,000 officers in Paris to contain the 8,000 protesters. A security perimeter has been set up in the city center, with government buildings protected. Three people have been arrested so far. At a news conference on Saturday, French Interior Minister Christophe Castaner blamed the clashes on far-right extemists infiltrating the demonstrations. France’s ‘gilets jaunes’ leave Macron feeling decidedly off-colour. Anti-government protesters who barricaded roads and fuel depots across France this week are to stage fresh demonstrations in Paris on Saturday, as Emmanuel Macron struggles to quell a national mood of defiance. 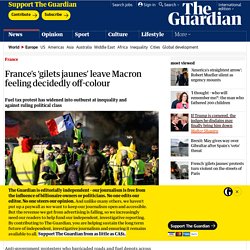 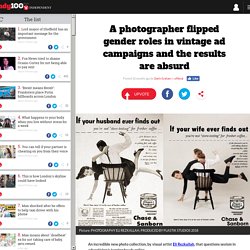 Taking inspiration from a family trip last year, the 31-year-old turned sexist old-school ads upside down in his new project, In A Parallel Universe. Speaking to indy100, Eli explained how he envisioned the idea: Last Thanksgiving, I was visiting my family in New Jersey and I overheard my uncles talk about how women are better off cooking, taking care of the kitchen, and fulfilling 'their womanly duties'. Although I know that not all men like my uncles think that way I was surprised to learn that some still do. We may cringe today when looking back at those 1950's campaigns, but the photos are a strong reminder of how far we have come in tackling sexism, and they're a reminder of how much more is left to do. Some Viewers Think Netflix Is Targeting Them by Race. Here’s What to Know. It’s not exactly news that different Netflix users see different images when they scroll through the streaming service’s titles.

In a June article from New York magazine, Todd Yellin, Netflix’s vice president of product, described how the company offered over a dozen posters — or “row art” — for its women’s wrestling series “GLOW.” One poster shows a picture of two cats fighting; another features an image of the show’s principal male lead, Marc Maron; another depicts Alison Brie and Betty Gilpin, duking it out in the ring. But now Netflix is facing a backlash after users have claimed that in some instances, the practice amounts to racial targeting.

Cannabis growth is killing one of the cutest (and fiercest) creatures in the US. Fierce yet adorable, Humboldt martens have been described as the west coast’s own Tasmanian devils. Finland Has Second Thoughts About Giving Free Money to Jobless People. Vaping may increase risk of cancer and heart disease, finds study. Energy drinks cause dangerous side effects in half of young people, finds study. Energy drinks have been found to cause negative side effects in half of young people, new research suggests. Scientists from the University of Waterloo in Ontario, Canada say that more should be done to restrict sales of the drinks to under 16s after a recent study found that 55 per cent of 12 to 24-year-olds reported negative health impacts, including rapid heartrates and seizures.

After quizzing 2,055 youngsters about how often they consume energy drinks like Red Bull or Monster, researchers said that they could potentially be more dangerous than other caffeinated drinks because of the way they are consumed. Of those who consumed the drinks, the study found that nearly a quarter (24.7 per cent) said they had experienced a fast heartbeat or struggled sleeping (24.1 per cent), while 0.2 per cent even reported suffering seizures. “The findings suggest a need to increase surveillance of health effects from these products.” Iceland becomes first supermarket to go 'plastic-free' for own brand products in landmark announcement. Iceland has become the first major retailer to commit to eliminating plastic packaging for all its own brand products within five years to help end the "scourge" of plastic pollution.

The retailer said it would be replacing plastic with packaging including paper and pulp trays and paper bags, which would be recyclable through domestic waste collections or in-store recycling facilities. Iceland said it was the first major retailer globally to go "plastic-free" on its own label products and aimed to complete the move by the end of 2023.