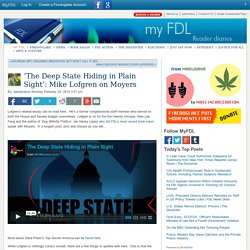 He’s a former congressional staff member who served on both the House and Senate budget committees. Lofgren is on for the first twenty minutes, then Lee Fang and the author of ‘Dog Whistle Politics’, Ian Haney López who did FDL’s most recent book salon speak with Moyers. It’ a longish post; pick and choose as you will… More about Dana Priest’s Top Secret America can be found here. While Lofgren is chillingly correct overall, there are a few things to quibble with here. In his long list of entities comprising the Deep State government, Lofgren left out the various regulatory agencies that comport their daily business almost totally as in the pockets of Wall Street, the Security State, and multinational corporations: SEC, EPA, FCC, USDA, FDA, and so forth; they are key core enablers as well. 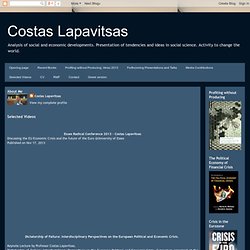 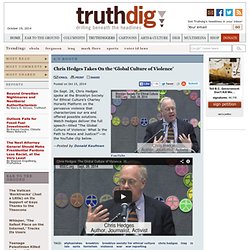 Watch Hedges deliver the full speech—titled “The Global Culture of Violence: What Is the Path to Peace and Justice?” —in the YouTube clip below. Philadelphia Student Union Disrupts Screening of Anti-Union Film at School District HQ. The Communist Horizon with Jodi Dean. Racecraft: Barbara Fields & Ta-Nehisi Coates in Conversation. The World Today with Tariq Ali - The Propaganda Wars. Linda Kaucher WTF!! Is TTIP? Too Big to Jail? BILL MOYERS: This week on Moyers & Company, the crusading Bill Black. 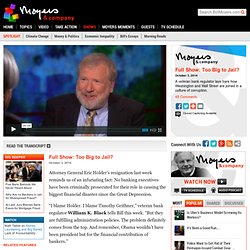 WILLIAM K. BLACK: No one can claim with a straight face that if we prosecuted bankers, as opposed to banks, that it would have any negative effect. It would have huge positive effects in sending the right message of accountability and the right message of deterrence. Chris Hedges Interviews Noam Chomsky. Bassemmasri. Video. Media Review - Alternative on-line media. Rev. Martin Luther King, Jr. - April 4, 1967 - Beyond Vietnam: A Time To Break Silence. You can't have a "more perfect union" without "more perfect people"! 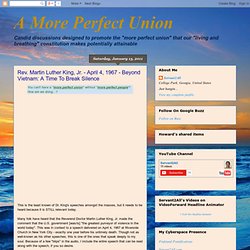 How are we doing...? This is the least known of Dr. King's speeches amongst the masses, but it needs to be heard because it is STILL relevant today. Many folk have heard that the Reverend Doctor Martin Luther King, Jr. made the comment that the U.S. government [was/is] "the greatest purveyor of violence in the world today". This was in context to a speech delivered on April 4, 1967 at Riverside Church in New York City - exactly one year before his untimely death. Mr. I need not pause to say how very delighted I am to be here tonight, and how very delighted I am to see you expressing your concern about the issues that will be discussed tonight by turning out in such large numbers.

The Coming Collapse of the Middle Class with Elizabeth Warren. "Our Only Hope Will Come Through Rebellion" AUSTERITY – a televised debate (by the Institute of World Affairs) on its logic and discontents featuring J.K. Galbraith, Jeff Sommers and Yanis Varoufakis. Democracy and Conflict - Lawrence Hatab. OxfordUnion. NPE 2014 National Conference: Diane Ravitch Keynote Address (Video) The Revolution Will Not Be Televised, Chavez, The Coup - MUST WATCH! BillMoyers.com’s Videos. Sean Ash Liberal Democrat activist interview. Will China shake the world again?

17 February 2014Last updated at 05:24 ET China's exceptional growth has been fuelled by massive debt and government subsidies as Robert Peston reports from Wuhan Unless you are an aficionado of the great moments of Chinese Communist history, you probably won't have heard of Wuhan (it is the site of Chairman Mao's legendary swim across the Yangtze). 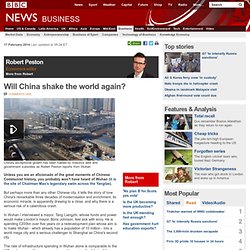 But perhaps more than any other Chinese city, it tells the story of how China's remarkable three decades of modernisation and enrichment, its economic miracle, is apparently drawing to a close, and why there is a serious risk of a calamitous crash. In Wuhan I interviewed a mayor, Tang Liangzhi, whose funds and power would make London's mayor, Boris Johnson, feel sick with envy. How Wolves Change Rivers. Linda Kaucher WTF!! Is TTIP? James Baldwin and Dick Gregory: "Baldwin's Nigger" (1969) Chunkymark. Wealth Inequality in America. Angela Y Davis - 150 Years Later: Abolition in the 21st Century.