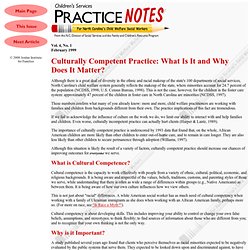 Although there is a great deal of diversity in the ethnic and racial makeup of the state's 100 departments of social services, North Carolina's child welfare system generally reflects the makeup of the state, where minorities account for 24.7 percent of the population (NCDSS, 1998; U.S. Census Bureau, 1998). This is not the case, however, for the children in the foster care system: approximately 47 percent of the children in foster care in North Carolina are minorities (NCDSS, 1997).

How to be a 'culturally competent' social worker - what the research says. People with learning disabilities or difficulties from black and minority ethnic (BME) communities were highlighted as a priority group in the Valuing People White Paper in 2001, yet many still need better access to good social care support. 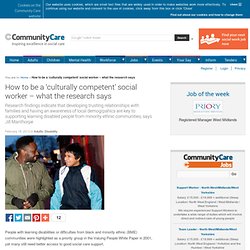 Research findings People who often have the greatest need for support – for example, one-parent families living in poverty, people from certain minority ethnic communities – have the greatest difficulty in accessing it, a recently published scoping review of prevention and social care for adults with learning disabilities noted (Emerson et al, 2011). Both practitioners and service commissioners may find the newly-revised version of a framework document indicating ways of assessing local circumstances useful in responding to these imperatives.

The framework was first produced in 2004 by the Foundation for People with Learning Disabilities, and has been updated to set it in the context of the new commissioning landscape. Tips for professionals. Reaching-out-practice. Equalities > Culturally Competent Practice. Culturally competent practice refers to an ability to respond to a range of diverse experiences and identities of clients and which through adaptation should strive to meet the diversity of life experiences, lifestyles and backgrounds clients have. 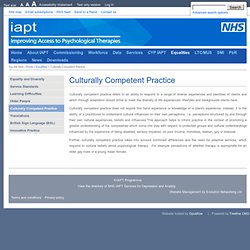 Culturally competent practice does not require first hand experience or knowledge of a client's experience. Instead, it is the ability of a practitioner to understand cultural influences on their own perceptions, i.e. perceptions structured by and through their own cultural experiences, beliefs and influences This approach helps to inform practice in the context of promoting a greater understanding of the complexities which come into play with respect to protected groups and cultural understandings influenced by the experience of being disabled, sensory impaired, on poor income, homeless, lesbian, gay or bisexual.