a8e241e1-4cec-4bb0-be55-b12747e0764f. Remarkable_cases_to_remember. En:hphys:lee-ej-the-study-of-the-materia-medica-159-11085 [Legatum Homeopathicum] En:ahr:start [Legatum Homeopathicum] In the spring of 1858, there was dissatisfaction expressed by a large number of homeopathic physicians in the US that the North American Journal of Homoeopathy (the only professional homeopathic periodical at the time, in the US) was approving and publishing contributions which were not in line with the idea of homeopathy as taught by Hahnemann. 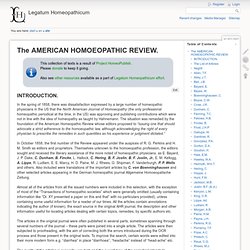 The situation was remedied by the foundation of the American Homeopathic Review whose editors proposed to “issuing one that should advocate a strict adherence to the homoeopathic law, although acknowledging the right of every physician to prescribe the remedies in such quantities as his experience or judgment dictated.” History and Development of Miasmatic Theory in Homeopathy, from Samuel Hahnemann to Nowadays. It is the intention of this study to give an in-depth and clear understanding of the theory of miasms, in order to comprehend them and identify its practical application. 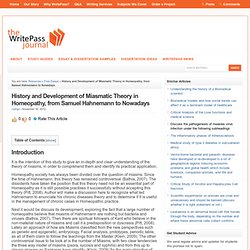 Homeopathy society has always been divided over the question of miasms. Since the time of Hahnemann, this theory has remained controversial (Bathia, 2007). The dissidents have taken the position that this theory need not be an essential part of Homeopathy as it is still possible practises it successfully without accepting this theory (Pitt, 2008). Author will make a discussion here to recognize what led Hahnemann to enunciate his chronic diseases theory and to determine if it is useful in the management of chronic cases in Homeopathic practice. Next it would be discuss its development, exploring the fact that a large number of homeopaths believe that miasms of Hahnemann are nothing but bacteria and viruses (Bathia, 2007). What are miasms?

QHD,%201%20%26%202,%202010. Anti-MiasmaticPrescribing. Articles on homeopathy from master homeopathic practitioners. Homeopathy is a Natural Science in its Purest Sense Interview with Dr. 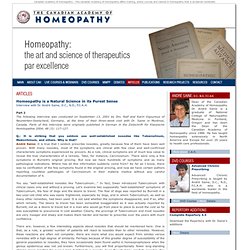 André Saine, D.C., N.D., F.C.A.H. Part 2The following interview was conducted on September 13, 2001 by Drs. Ralf and Karin Vigoureux of Neunkirken-Seelscheid, Germany, at the time of their three-week visit with Dr. Saine in Montreal, Canada. Parts of this interview were originally published in German in the Zeitschrift für Klassische Homöopathie 2004; 48 (3): 117-127. Q.: It is striking that you seldom use well-established nosodes like Tuberculinum, Medorrhinum, and others. You say "well-established nosodes like Tuberculinum... " There are, however, a few interesting aspects about nosodes that should be mentioned here. 2001HisSc..39..255E Page 255. Placebo.pdf (application/pdf Object) Article List. UNDERSTANDING THE HOMEOPATHIC JUNGLE. Miasms in Classical Homoeopathy (Part II) – David Little - Journal.

This article was first published in "Homoeopathy Online". 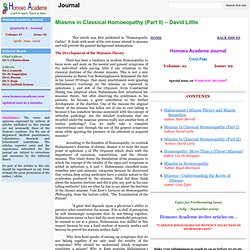 It deals with most of the core issues related to miasms and will provide the general background information. Homeopathy In Endocrinology,Endocrine Diseases Treatment,Endocrine Diseases Medicine,Homeopathy Medicine,Obesity Treatment,Obesity Homeopathy Treatmen. The viewpoint of the modern physiologist reflects the theory that the vast majority of human ills are traceable to dysfunctions of the glandular system; that most growth problems (over- and under-development of the whole body or parts) and many maladjustments of the child to its environment, and even of the adult to his relationships and problems, are related in some degree to endocrine imbalance. 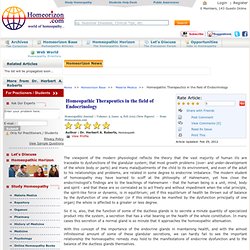 So it is, also, that the function of some of the ductless glands is to secrete a minute quantity of specialized product into the system, a secretion that has a vital bearing on the health of the whole constitution. In many cases this secretion of a normal gland is so minute that it approaches the homoeopathic attenuation. In considering this vast subject it is apropos to quote from the book by August A. Werner, M.D. , F.A. C.P. , entitled Endocrinology (Lea and Febiger, 1937): It is necessary to have: Classical homeopathy information - Homeoinfo. Alternative-Medicine. Tips of Dr. D.P. Rastogi. Duration of action.

Boericke's Materia Medica Relationship of Remedies table "Once, in conversation with the late Dr. 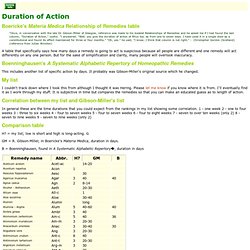 Gibson-Miller of Glasgow, reference was made to his booklet Relationships of Remedies and he asked me if I had found the last column, "Duration of Action," useful. "I answered; "Well. you give the duration of action of Rhus tox. as from one to seven days. I have used it in a single dose as a constitutional and found its effect maintained for three or four months. " "Oh, yes. " he said, "I know; I think that column is not right. " - Christopher Gordon (Scotland) (reference from Julian Winston) A table that specifically says how many days a remedy is going to act is suspicious because all people are different and one remedy will act differently on any one person. A Beautiful Case Presentation of Renal Failure. I found this case presented by Dr. 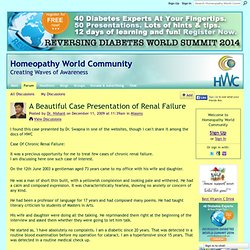 Swapna in one of the websites, though i can't share it among the docs of HWC Case Of Chronic Renal Failure: It was a precious opportunity for me to treat few cases of chronic renal failure. I am discussing here one such case of interest. On the 12th June 2003 a gentleman aged 73 years came to my office with his wife and daughter. He was a man of short thin built, with a yellowish complexion and looking pale and withered. He had been a professor of language for 17 years and had composed many poems.

His wife and daughter were doing all the talking. He started as, 'I have absolutely no complaints. Since a few weeks I had slight nausea and aversion for food. He has been on anti-hypertensive allopathic drugs and Insulin injections for about 15 years. PreOp - Patient Education. Leading Basic Indications of Some Drugs in Special Conditions. Homeopathy Internet Resources. Articles – Science-based Homeopathy. UNDERSTANDING THE HOMEOPATHIC JUNGLE. Carbuncle and Homoeopathy. What is a carbuncle? 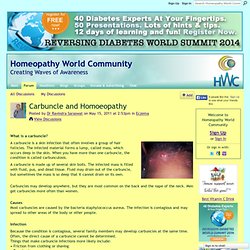 A carbuncle is a skin infection that often involves a group of hair follicles. The infected material forms a lump, called mass, which occurs deep in the skin. When you have more than one carbuncle, the condition is called carbunculosis. A carbuncle is made up of several skin boils. The infected mass is filled with fluid, pus, and dead tissue. Carbuncles may develop anywhere, but they are most common on the back and the nape of the neck. Causes Most carbuncles are caused by the bacteria staphylococcus aureus. Infection Because the condition is contagious, several family members may develop carbuncles at the same time. Persons with diabetes, dermatitis, and weakened immune systems are more likely to develop staph infections. Symptoms A carbuncle is a swollen lump or mass under the skin.

It may also: Grow very fastHave a white or yellow centerWeep, ooze, or crustSpread to other skin areas. Genetic Code of Homoeopathy. Healthypages Discussion Forums - Powered by vBulletin. Library/workbook.pdf. Approaching Well-Being and Gem Stones and a Lot More.