Why homeopathy must not gain a foothold in the UK. Keir Liddle, University of Stirling Despite the NHS stating that "homeopathy performs no better than placebos", support for the practice still prevails. 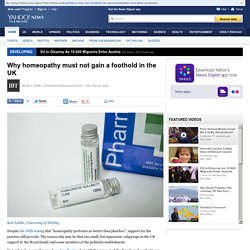 The reason why may be that two small, but important, subgroups in the UK support it: the Royal family and some members of the political establishment. Not only is homeopathy unsafe and ineffective, but with the support of the Royals such as the Queen and the secret lobbying of Prince Charles in favour of funding it on the NHS, it also has the potential to cause a ridiculous constitutional crisis. And by gaining more influence within political circles, the chances of it being included on the NHS are higher than ever. The Queen has had a homeopath by royal appointment for quite some time.

When it comes to Prince Charles' support for homeopathy, the apple doesn't fall far from the tree. A systematic review of systematic reviews of homeopathy. Homeopathy is a non-effective treatment of medical conditions says Australian government. Homeopathy – the practice of treating unwell people with small doses of substances – has been ruled as an ineffective way of treating any health condition, Australia's government has ruled. 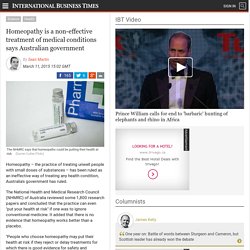 The National Health and Medical Research Council (NHMRC) of Australia reviewed some 1,800 research papers and concluded that the practice can even "put your health at risk" if one was to ignore conventional medicine. It added that there is no evidence that homeopathy works better than a placebo. "People who choose homeopathy may put their health at risk if they reject or delay treatments for which there is good evidence for safety and effectiveness," read a statement from the health body. CEO Professor Warwick Anderson said: "It is important that the public has access to independent, high quality advice when it comes to making decisions about their health care. Clinical Trials of Homeopathy 'Essentially Test Whether Magic Works', Experts Say. Clinical trials of alternative medicines, such as homeopathy and Reiki, are essentially testing if magic works, experts have said. 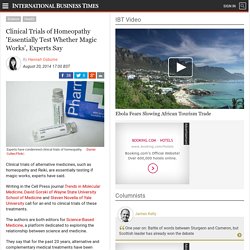 Writing in the Cell Press journal Trends in Molecular Medicine, David Gorski of Wayne State University School of Medicine and Steven Novella of Yale University call for an end to clinical trials of these treatments. The authors are both editors for Science-Based Medicine, a platform dedicated to exploring the relationship between science and medicine. They say that for the past 20 years, alternative and complementary medical treatments have been embraced, despite relying on dubious science. "We hope this will be the first of many opportunities to discuss in the peer-reviewed literature the perils and pitfalls of doing clinical trials on treatment modalities that have already been refuted by basic science," said Gorski. Testing 'magic' The Worst Homeopathy Study. Ever. The Worst Homeopathy Study. 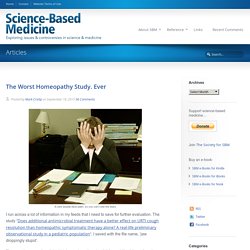 Ever A rare double-face palm, so you can’t see the tears I run across a lot of information in my feeds that I need to save for further evaluation. The study “Does additional antimicrobial treatment have a better effect on URTI cough resolution than homeopathic symptomatic therapy alone? A real-life preliminary observational study in a pediatric population“, I saved with the file name, ‘jaw droppingly stupid’. The worst homeopathy clinical trial ever doesn’t spring full formed like Athena from the head of Zeus. Would that it were syrup of Lethe Individualization of care, so beloved by homeopaths as a reason their particular form of magic cannot be tested, was ignored so that 80 adults were randomized to receive either a homeopathic nostrum or a placebo. 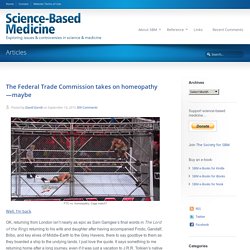 Well, I’m back. OK, returning from London isn’t nearly as epic as Sam Gamgee’s final words in The Lord of the Rings returning to his wife and daughter after having accompanied Frodo, Gandalf, Bilbo, and key elves of Middle-Earth to the Grey Havens, there to say goodbye to them as they boarded a ship to the undying lands. I just love the quote. It says something to me returning home after a long journey, even if it was just a vacation to J.R.R.

All of this is a way of saying that this post might actually be relatively brief for a post by me…no epics this week. Homeopathy: The One Quackery To Rule Them All A frequent topic on this blog is homeopathy, for reasons that regular readers no doubt understand all too well by now. FDA vs. Earlier this year, the FDA announced that it was considering modernizing how it regulates homeopathic remedies and held a hearing for public input.