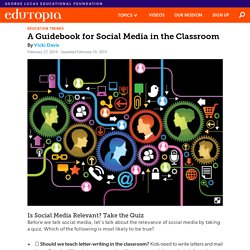 Take the Quiz Before we talk social media, let's talk about the relevance of social media by taking a quiz. Which of the following is most likely to be true? ☐ Should we teach letter-writing in the classroom? Kids need to write letters and mail them. The Social Media Answer ☑ There's one form of writing that can arguably get someone fired, hired or forced to retire faster than any other form of writing. One form of writing is that powerful. If you guessed social media, you're right. The Social Media Myth The myth about social media in the classroom is that if you use it, kids will be Tweeting, Facebooking and Snapchatting while you're trying to teach. You don't even have to bring the most popular social media sites into your classroom. 12 Ways Teachers are Using Social Media in the Classroom Right Now Tweet or post status updates as a class.

E-Learning Storyboard: Art or Science? Christmas is fast approaching and I’ve been asked again this year to write a guest blog article for the E-Learning Network’s advent calendar of e-learning insights, advice and stories. 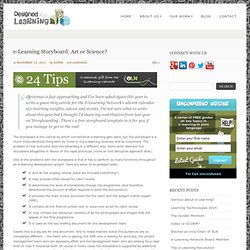 I’m not sure what to write about this year but I thought I’d share my contribution from last year on ‘Storyboarding’. There’s a free storyboard template in it for you if you manage to get to the end! The storyboard is the vehicle by which conventional e-learning gets done, but the storyboard is a much misunderstood thing both by those in the e-learning business and by customers.

The problem is that everyone does storyboarding in a different way. Some even abandon the storyboard altogether in favour of the rapid prototype (more on this disruptive approach later). One of the problems with the storyboard is that it has to perform so many functions throughout an e-learning development project. It acts as the scoping vehicle (have we included everything?) Training design ideas from Cathy Moore. Learning Style Myth. Teaching and Learning. Professor Gilly Salmon - PVC Learning Transformations - Swinburne University of Technology, Melbourne, Victoria. Mooc.org. About MOOCs. The Reed Diaries: MOOCs: A Rose by any other name... So this week is Open Education Week, and as I’ve previously posted, the North West OER Network are facilitating an open course. 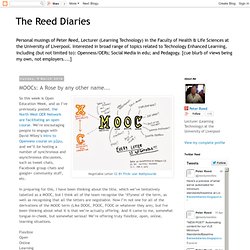 We’re encouraging people to engage with David Wiley’s Intro to Openness course on p2pu, and we’ll be hosting a number of synchronous and asynchronous discussions, such as tweet chats, Facebook group chats and google+ community stuff, etc. In preparing for this, I have been thinking about the title, which we’ve tentatively labelled as a MOOC, but I think all of the team recognise the ‘iffyness' of the term, as well as recognising that all the letters are negotiable. Now I’m not one for all of the derivations of the MOOC term (Like DOOC, POOC, FOOC or whatever they are), but I've been thinking about what it is that we’re actually offering. 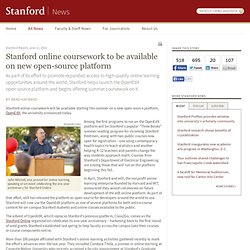 Kenneth Chan John Mitchell, vice provost for online learning, speaking at an event celebrating the one-year anniversary for Stanford Online. Among the first programs to run on the OpenEdX platform will be Stanford's popular "Three Books" summer reading program for incoming Stanford freshmen, along with two public courses now open for registration – one using contemporary health topics to teach statistics and another helping K-12 teachers and parents change the way students approach math. Courses from Stanford's Department of Electrical Engineering are among those that will run on the platform beginning this fall. In April, Stanford and edX, the nonprofit online learning enterprise founded by Harvard and MIT, announced they would collaborate on future development of the edX online platform.