« Comparison is the thief of joy. » Theodore Roosevelt

« Our lives today are filled with information from the extremes of the bell curve of human experience.

The best of the best, worst of the worst, and most upsetting of the upsetting. We only see the most exceptional news stories because that’s what drives revenue. This is a real problem when it comes to comparison because you can only be exceptional in one thing thing and you’re going to be below average in nearly everything else. That makes comparison a very dangerous game to play. » Mark Manson

As social networking sites expose us to a constant stream of information about specific health aspects of our friends’ lives – such as exercise – seeing our friends posting about the run they just did may not be the best from of motivation. Instead, we may be better off lacing up our shoes and heading out the door for our own run.

Social Comparison: An Unavoidable Upward Or Downward Spiral. Social comparison is a normal behavior strategy where we seek to better understand our ‘status’—whether relating to ability, opinion, emotional reaction, and more—by comparing ourselves to other people. 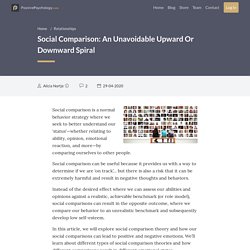 Social comparison can be useful because it provides us with a way to determine if we are ‘on track’… but there is also a risk that it can be extremely harmful and result in negative thoughts and behaviors. Instead of the desired effect where we can assess our abilities and opinions against a realistic, achievable benchmark (or role model), social comparisons can result in the opposite outcome, where we compare our behavior to an unrealistic benchmark and subsequently develop low self-esteem. We Are More Sensitive (To Facebook) Than We Think. “We found that positive experiences on social media were not related or only very slightly linked to lower depressive symptoms. 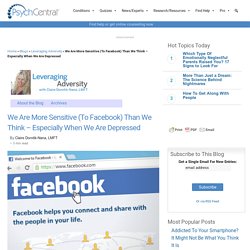 However, negative experiences were strongly and consistently associated with higher depressive symptoms,” said Brian Primack, M.D., Ph.D., dean of the Honors College and director of the Center for Research on Media, Technology and Health at the University of Pittsburg (Primack, 2018). Primack was referring to research that he and his team conducted with 1,179 full-time students ages 18 to 30 at the University of West Virginia. As part of the study, participants completed a questionnaire to assess their depressive symptoms, and were also asked about time they spent on social media sites. In a fascinating result, Primack and his team found that for each 10 percent increase in negative experiences depressive symptoms increased by 20 percent – a statistically significant finding.

Why Your Friends' Exercise Post May Not Be The Best Motivation. We have all seen the posts of our friends crossing the finish line of a race, sharing their Strava run statistics, or going for that fabulous hike. 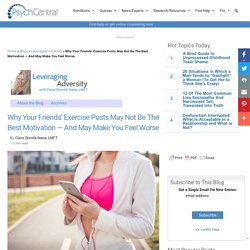 According to researchers at Texas State University and the University of Arizona, these posts tends to influence our feelings about our own weight and body image. Recruiting 232 study participants Stephen Rains, a UA communication professor and UA alumna Tricia Burke, a professor of communication studies at Texas State University, asked them to log into their favorite social media site and look at posts from the past 30 days from their friends. The participants counted how many of the posts – photos or text-only – depicted their friends engaging in exercise. For the study, exercise was broadly defined as any physical activity for the purpose of maintaining fitness and health, which could include anything from hiking to taking a walk to going to the gym. 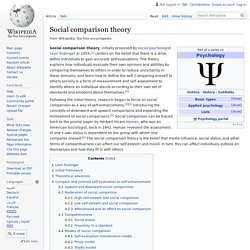 The theory explains how individuals evaluate their own opinions and abilities by comparing themselves to others in order to reduce uncertainty in these domains, and learn how to define the self. Following the initial theory, research began to focus on social comparison as a way of self-enhancement,[2][3] introducing the concepts of downward and upward comparisons and expanding the motivations of social comparisons.[4] Initial framework[edit] In the initial theory, Festinger provided nine main hypotheses. Theoretical advances[edit] Since its inception, the initial framework has undergone several advances. Self-evaluation[edit] Who is Happy? The Peacock and The Crow, The vicious cycle of unhappiness.. 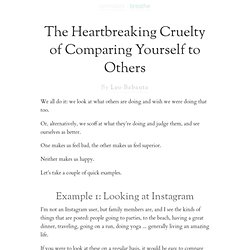 Or, alternatively, we scoff at what they’re doing and judge them, and see ourselves as better. One makes us feel bad, the other makes us feel superior. Neither makes us happy. Let’s take a couple of quick examples. Example 1: Looking at Instagram I’m not an Instagram user, but family members are, and I see the kinds of things that are posted: people going to parties, to the beach, having a great dinner, traveling, going on a run, doing yoga … generally living an amazing life. Conformity. Reputation. Test Anxiety.