Life is a practice and what you choose to practice is what will make up your character.

"In life we will all suffer one of two pains: the pain of discipline or the pain of regret. 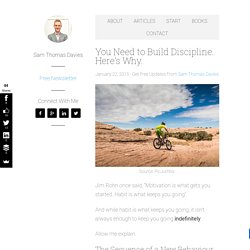 Jim Rohn once said, “Motivation is what gets you started. Habit is what keeps you going”. And while habit is what keeps you going, it isn’t always enough to keep you going indefinitely. Allow me explain. The Sequence of a New Behaviour You have a goal. But motivation is not reliable; it ebbs and flows depending on your emotional state and if you’re “not in the mood”, you can let yourself off the hook. So perhaps you incentivise yourself to do your new behaviour instead, which, in turn, motivates you again and again.

This is understandable: in the beginning, it’s painful and not doing it is easier. If you’re really committed, you’ll study the science of behaviour change, particularly, habit formation, and identify a cue to trigger your new behaviour. The Repeated Bout Effect: If Nothing Changes, Nothing Is Going to Change. If you have ever taken a few weeks off from exercise and then completed a strenuous workout, you may know what I’m about to say. 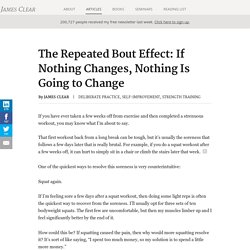 That first workout back from a long break can be tough, but it’s usually the soreness that follows a few days later that is really brutal. For example, if you do a squat workout after a few weeks off, it can hurt to simply sit in a chair or climb the stairs later that week. One of the quickest ways to resolve this soreness is very counterintuitive: Squat again. The Beginner's Guide to Deliberate Practice. In some circles, Ben Hogan is credited with “inventing practice.” 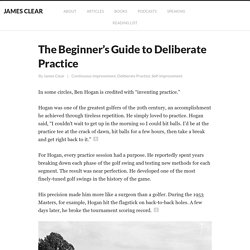 Hogan was one of the greatest golfers of the 20th century, an accomplishment he achieved through tireless repetition. He simply loved to practice. Hogan said, “I couldn't wait to get up in the morning so I could hit balls. I'd be at the practice tee at the crack of dawn, hit balls for a few hours, then take a break and get right back to it.”

For Hogan, every practice session had a purpose. His precision made him more like a surgeon than a golfer. Hogan methodically broke the game of golf down into chunks and figured out how he could master each section. Hogan finished his career with nine major championships—ranking fourth all-time. The Lure of the Special Occasion. Self-Achievement. Grit.

Consolidate. Self-Regulation. Attention Balance. How to Hack Your Habits. Routine. The No Exceptions Rule: How to Maximize Your Willpower and Stay on Track with Your Goals. When Sid Simon turned 87 on May 29th, 2002, he showed no signs of slowing down. 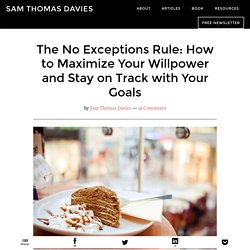 For Simon, health was his single most important value. And, despite his age, he was still active. He regularly biked, took supplements and perhaps, most importantly, ate healthily … except when there was a full moon. Only then was when he was “allowed” to eat a bowl of ice cream. In his book, The Success Principles, Jack Canfield recounts Simon’s 75th birthday: When I attended Sid’s seventy-fifth birthday celebration, over 100 of his family members, closet friends, and admiring former students came from all across the country to celebrate with him. Simon knew that a 100% commitment was actually easier to keep, and he was unwilling to undermine years of success for other people’s approval. The No Exceptions Rule Every day we wake up and wrestle with ourselves over whether or not to keep our commitments and stick to our disciplines. Should we politely accept the cookie we’re offered or stick to our diet?

1. 2. 3. 5 Practical Strategies for Building Self-Discipline. Back in January, I wrote an article about the importance of self-discipline, specifically, what self-discipline is and why you need it in the long-term. 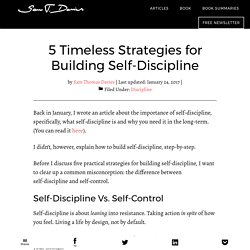 3 Small Discipline Habits You Can Train. 7 Discipline-Mastering Practices. By Leo Babauta A craftsman masters his trade by repeated practice, with care and continual learning, with devotion to the purpose. 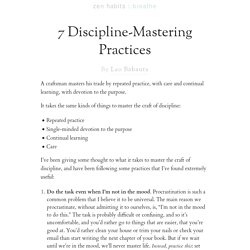 SelfDiscipline Is SelfLove by Will Smith Speech. Another EPIC motivational speech from Will Smith on Instagram stories today (March 4th 2018). 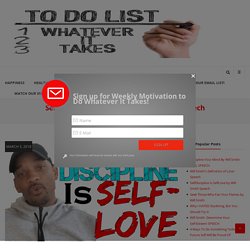 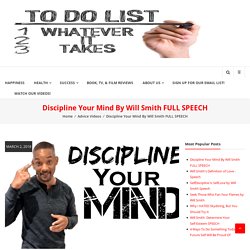