Will Power - Self Discipline - Guidance, Development and Exercises 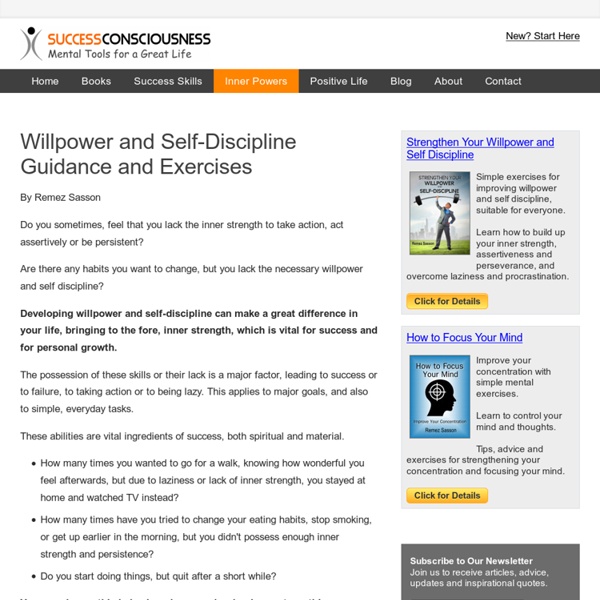 By Remez Sasson Do you sometimes, feel that you lack the inner strength to take action, act assertively or be persistent? Are there any habits you want to change, but you lack the necessary willpower and self discipline? Developing willpower and self-discipline can make a great difference in your life, bringing to the fore, inner strength, which is vital for success and for personal growth. The possession of these skills or their lack is a major factor, leading to success or to failure, to taking action or to being lazy. These abilities are vital ingredients of success, both spiritual and material. How many times you wanted to go for a walk, knowing how wonderful you feel afterwards, but due to laziness or lack of inner strength, you stayed at home and watched TV instead? You can change this behavior when you develop inner strength! Let's examine these skills. Willpower Definitions: The ability to control or reject unnecessary or harmful impulses. Self Discipline Definitions: About the Author Related:  Will Power / Discipline • Discipline, Will Power, Control

How to Boost Your Willpower (From left: Robert Stolarik for The New York Times New York; Alan Zale for The New York Times; Owen Franken for The New York Times ) Every day, we are tested. Whether it’s a cookie tempting us from our diets or a warm bed coaxing us to sleep late, we are forced to decide between what we want to do and what we ought to do. The ability to resist our impulses is commonly described as self-control or willpower. The elusive forces behind a person’s willpower have been the subject of increasing scrutiny by the scientific community trying to understand why some people overeat or abuse drugs and alcohol. What researchers are finding is that willpower is essentially a mental muscle, and certain physical and mental forces can weaken or strengthen our self-control. Studies now show that self-control is a limited resource that may be strengthened by the foods we eat. Last month, Dr. But the researchers also found that restoring glucose levels appears to replenish self-control.

Army Secrets to Good Discipline Army Secrets to Good Discipline 5 principles parents can use by Jennifer Mangan We all want our kids to be the best that they can be. 1. Major Buhmann: As a parent and a military leader, I try to develop character in both my kids and my students, but you can't develop character in others if you are not a person of character yourself. Loyalty Duty Respect Selfless-Service Honor Integrity Personal Courage When you are a Major in the Army, your position alone can make you seem right even when you are wrong. Civilian Townsend: The parent needs to be what he or she is teaching. 2. In the Army, we take an oath that says the President has reposed special trust and confidence in us. article preview

VIA Me > Breakthrough in Positive Psychology > Home Title Click here to take the VIA Survey | Click here to watch the full video Custom Search Login | Register Take the First Step: Take the Free Character Strengths Test Research tells us that individuals who use their character strengths lead happier, more satisfying lives. It is our mission as a non-profit organization to provide every individual with this powerful character information, and we do this by offering the scientifically validated* VIA Survey on character strengths free of charge. Now is your time for a fresh start, a breakthrough, or a new beginning. The VIA Survey and VIA Youth Survey (for ages 10-17) take approximately 10-15 minutes to complete. View step-by-step instructions Register to get started. email address password (Forgot your password?)

Willpower From Wikipedia, the free encyclopedia Willpower may refer to: Personal character[edit] Other[edit] THE INGREDIENTS OF SELF “A proper balance must be struck between indulgence and severity. However, severity, despite occasional mistakes, is preferable to a lack of discipline.” -I Ching (1150 B.C) Self-discipline is a very powerful tool that can be developed for achieving about anything which you can dream. However, there are four key ingredients that must be present in our lives to allow self-discipline to flourish and exist. 1. 2. 3. 4. All four of these ingredients must be present in our lives to achieve self-discipline. In order to ensure our success at every endeavor, we must first understand how to strengthen and enhance each of the four key-ingredients needed for self-discipline. “I count him braver who overcomes his desires than him who conquers his enemies; for the hardest victory is over self.” -Aristotle (384 – 322 B.C.) Learn to say NO to your destructive feelings, uncontrolled cravings, and selfish desires. Here is a step by step description of this self-control technique: 1. 2. 3. 4. 5. “Rest not!

When Life Hacks You Off How often have you been given some really, really good advice in your life? I’ll put money on it being a lot more often than the number of times you’ve taken it. And conversely I’ll bet you’ve offered really, really good advice far more often than it’s been taken. (As an aside I’ll wager that the times good advice is taken is pretty similar to the number of times the advice matched what the person receiving the advice wanted to do in the first place! The point is this: it’s always easier to solve other people’s problems than your own. There are a few tools you can use yourself to take advantage of this clarity of vision without the expense of a coach and I’ve listed some of them here. “If a friend of mine came to me with this problem, what would I ask them and what would I suggest?” There now. Let’s take a personal example where life hacks you off. Okay, I’ve over-simplified to make the point but I’m sure you get the idea. Chances are…you’ll spot a way forward.

Mind Tools - Management Training, Leadership Training and Career Training Daniel Goleman: Yes, You Can Build Willpower (meditate on neuroplasticity!) (Editor’s note: Daniel Gole­man is now con­duct­ing a series of audio inter­views includ­ing a great one with Richard David­son on Train­ing the Brain. We are hon­ored to bring you this guest post by Daniel Gole­man, thanks to our col­lab­o­ra­tion with Greater Good Mag­a­zine.) Yes, You Can: New research sug­gests we can build our willpower – By Daniel Goleman Those of us who strug­gle to resist junk foods or oth­er­wise suf­fer a lack of willpower will be heart­ened by some good news from neu­ro­science. First, the bad news. In a typ­i­cal exper­i­ment on this effect, one group of peo­ple was made to watch a video of a bor­ing scene; another was not. This all sug­gests we have a fixed willpower bud­get, one we should be care­ful in spend­ing. But the good news is that we can grow our willpower; like a mus­cle, the more we use it, the more it grad­u­ally increases over time. As the mus­cle of will grows, the larger our reser­voir of self-discipline becomes.

What the Military Teaches About Self Discipline | A Veteran's Perspective When a person joins the military, his first taste of discipline is external. His drill sergeants assume that he has no self discipline and thus seek to install it; left to his own devices, the soldier, sailor, or airman would be slovenly and too self absorbed to succeed. Had the new recruit chosen another life, college or a civilian job, his time away from the classroom or the shop would have been his own. This is not to say that the young civilian would not find discipline in his life. So his first days in the military, aren’t pleasant ones. At first he is forced to do these things. This determination and spirit does not leave the soldier when he leaves the military. He knows, first of all, the value of organization. He learned long ago that self discipline is the first step towards leadership, and now he is ready to step to the front of the group and assign those tasks to others. He realizes the importance of following through on a task and following up on the people assigned to it.

Dirty Secrets of The Food Processing Industry Written by Sally Fallon We have always processed our food; this is an activity that is uniquely human. We chop, soak, cook and ferment our food - as well as grind and dry - these are all types of processing. Traditional processing has two functions: to make food more digestible and to preserve it for use during times when food isn’t readily available. Unfortunately, in modern times, we have substituted local artisanal processing with factory and industrial processing, which actually diminishes the quality of the food, rather than making it more nutritious and digestible. Let’s look at the processing involved in the typical American breakfast of cereal, skim milk and orange juice. In his book Fighting the Food Giants, biochemist Paul Stitt describes the extrusion process, which treats the grains with very high heat and pressure, and notes that the processing destroys much of their nutrients. Even boxed cereals sold in health food stores are made using the extrusion process.