« Pursuing something only reinforces that you lack it in the first place. » Mark Manson

In philosophy and psychology, self-fulfillment is the realizing of one's deepest desires and capacities.

Don’t just ask whether you’re proud of what you’ve achieved. Self-fulfillment. In philosophy and psychology, self-fulfillment is the realizing of one's deepest desires and capacities. 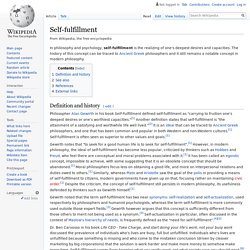 The history of this concept can be traced to Ancient Greek philosophers and it still remains a notable concept in modern philosophy. Definition and history[edit] Gewirth noted that the term self-fulfillment has two near synonyms: self-realization and self-actualization, used respectively by philosophers and humanist psychologists, whereas the term self-fulfillment is more commonly used outside those expert fields.[3] Gewirth however argues that this concept is sufficiently different from those others to merit not being used as a synonym.[3] Self-actualization in particular, often discussed in the context of Maslow's hierarchy of needs, is frequently defined as the "need for self-fulfillment".[4][5] Dr.

Ben Carvosso in his book Life CEO - Take Charge, and start doing your life's work, not your busy work discussed the prevalence of individuals who's lives are busy, full but unfulfilled. The Difference Between Progress and Achievement. Psychologist Adam Grant on the Paradox of Achievement and How Motivated Dissatisfaction Fuels Creativity. “To be perfectly original,” Lord Byron famously quipped, “one should think much and read little, and this is impossible, for one must have read before one has learnt to think.” 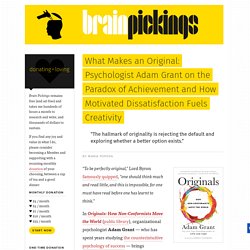 In Originals: How Non-Conformists Move the World (public library), organizational psychologist Adam Grant — who has spent years studying the counterintuitive psychology of success — brings contemporary social science to the timeless validity of Byron’s words, examining the contextual nature of creative genius and demonstrating that the most groundbreaking innovations aren’t spurred by arbitrary sparks of mystical epiphany but by intelligent and informed dissatisfaction with cultural defaults, translated into a radical and purposeful desire to upend those defaults. Grant — an immensely pleasurable writer who interpolates elegantly between T.S. Originality involves introducing and advancing an idea that’s relatively unusual within a particular domain, and that has the potential to improve it. Need for achievement. Need for achievement (N-Ach) refers to an individual's desire for significant accomplishment, mastering of skills, control, or high standards. 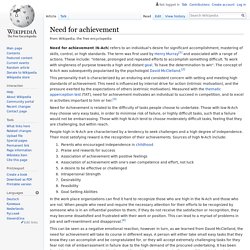 The term was first used by Henry Murray[1] and associated with a range of actions. These include: "intense, prolonged and repeated efforts to accomplish something difficult. To work with singleness of purpose towards a high and distant goal. To have the determination to win". The concept of N-Ach was subsequently popularised by the psychologist David McClelland.[2] This personality trait is characterized by an enduring and consistent concern with setting and meeting high standards of achievement. Need for Achievement is related to the difficulty of tasks people choose to undertake. People high in N-Ach are characterised by a tendency to seek challenges and a high degree of independence. In the work place organizations can find it hard to recognize those who are high in the N-Ach and those who are not.

Theory[edit] Measurement[edit] 4 Reasonable Ways to Achieve Overnight Success. Most of the time, I think our constant quest to achieve faster results is a trap. 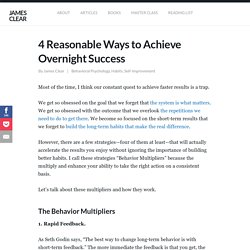 We get so obsessed on the goal that we forget that the system is what matters. We get so obsessed with the outcome that we overlook the repetitions we need to do to get there. We become so focused on the short-term results that we forget to build the long-term habits that make the real difference. However, there are a few strategies—four of them at least—that will actually accelerate the results you enjoy without ignoring the importance of building better habits.

Why You Shouldn’t Shy Away From Self-Promotion. Tune into your reaction, then mine those emotions in positive ways. 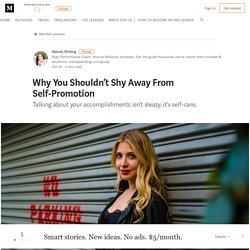 You care about your job, so when someone steals your idea it’s natural to be upset. There’s no right or wrong way to feel. In fact, your emotions may sway from disgust to defeat. The first step is to notice what what arises for you. Developing the self-awareness to deal with the emotions that come up and act on them constructively is key. Get your boundaries firmly in place (the sooner, the better). Don’t stew–only bringing it up a month later. It’s also completely okay to stand up for yourself in the moment. Talk solutions, not trash. If you confront the person directly, start by asking questions instead of making accusations.