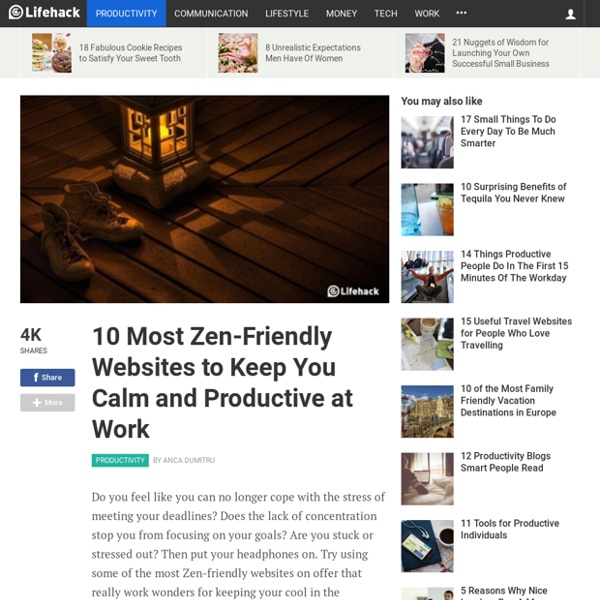 Do you feel like you can no longer cope with the stress of meeting your deadlines? Does the lack of concentration stop you from focusing on your goals? Are you stuck or stressed out? Then put your headphones on. Try using some of the most Zen-friendly websites on offer that really work wonders for keeping your cool in the workplace. There are so many more sites like this out there, but — for the purposes of this article — I have included 10 of them that I use myself. 1. Yes, that’s exactly what you should do for the next two minutes. 2. Calm.com also challenges you to sit still and quiet your mind. You can choose from the many calming atmospheres that are available — gentle waves, fields, waterfalls. 3. SimplyNoise uses white, pink and brown noise. 4. SimplyRain belongs to the SimplyNoise website and it simply plays the rain sounds for you. 5. This one’s my favorite and the one I use most often when I write. 6. You can’t afford spending every morning at Starbucks? 7. naturesoundsfor.me

6 Ways to Improve Decision Making By: Chris Tell at: It was one of my first private equity deals ever. I was introduced to a group of guys, all sporting adequate qualifications, a good story (BTW, almost everyone has a good story if only in their own minds) and they were already backed by a well-known Angel. The market opportunity looked good, the team looked good, and some pretty smart guys where getting involved. I had been introduced by a good friend, a guy I considered to be very honest. Turns out he was being taken for a ride. Discipline To think good thoughts requires effort. This is one of the things that discipline – training – is about. In its natural sense, discipline is systematic instruction intended to train a person, sometimes literally called a disciple, in a craft, trade or other activity, or to follow a particular code of conduct or "order". Often, the phrase "to discipline" carries a negative connotation.

4 Ways to Become a Better Learner The CEO sitting across from me is explaining how he and the other executives of a telecommunications firm were caught off guard by a new technology that disrupted the firm’s business. “We did not see WhatsApp coming,” he says, shaking his head. He wants to increase his capacity to learn, to spot and understand developments inside and outside of the firm. He believes this is vital not only for better performance now, but also for the continued success of his career. “I’m in my early 50s, and I’m afraid that the next time I want to change jobs, people will see me as irrelevant. I’ve seen it happen to plenty of others.

Doing These Simple Things After Waking Up Makes Your Day Better You know the drill: open eyes, get up, move yourself robotically to the bathroom, dress up, and get out. Admit it, this is your morning routine. No wonder you’re not functioning at full capacity. No wonder you’re having a really hard time pulling yourself together just enough to be able to smile to your colleagues. No wonder you complain that you can’t find anything that makes your day better. Countries Egyptians Can Travel to without a Visa Visa this visa that, it’s that time of year where one has to decide what fun summer plans they are going to make. But wait! You don’t have a visa, what about the passport situation? Is it too late? You Can Increase Your Intelligence: 5 Ways to Maximize Your Cognitive Potential 33 1Share Synopsis Learn about the principles of fluid intelligence and strengthen your cognitive abilities through exercises and daily practice.

Why Self-Disciplined People Are Happier It’s easy to think of the highly self-disciplined as being miserable misers or uptight Puritans, but it turns out that exerting self-control can make you happier not only in the long run, but also in the moment. The research , which was published in the Journal of Personality , showed that self-control isn’t just about deprivation, but more about managing conflicting goals. Since most people associate highly disciplined folks with being more task-oriented — they’re not likely to be the life of the party, for example, or eager to act on a whim — the scientists decided to correlate self-control with people’s happiness, to determine if being self-disciplined leaves people feeling less joyful. The smartphone experiment also revealed how self-control may improve mood. Those who showed the greatest self-control reported more good moods and fewer bad ones.

The Difference Between Routine and Ritual: How to Master the Balancing Act of Controlling Chaos and Finding Magic in the Mundane William James, at the dawn of modern psychology, argued that our habits anchor us to ourselves. As someone equally fascinated by the daily routines of artists and with their curious creative rituals, and as a practitioner of both in my own life, I frequently contemplate the difference between the routine and ritual, these two supreme deities of habit. They seem to be different sides of the same coin — while routine aims to make the chaos of everyday life more containable and controllable, ritual aims to imbue the mundane with an element of the magical.

The 27 Unspoken Rules Of Wearing A Suit You can’t expect to look all dapper and gentlemanly without knowing Suiting 101. Justine Zweibel / BuzzFeed The width of the tie should match the width of the lapel. 5 Ways to Free Up Space on Your Android Device Phones and tablets only have so much internal memory. If you’re running out of space for apps or data, there are a few quick tricks you can use to free up space and get back to using your Android device. This post covers both freeing up space on your system storage and SD card or USB storage – the system storage space is for apps, while the SD card or USB storage is for other data. Move Apps to SD Card or USB Storage

5 Ways to Boost Mindfulness Even on Busy Days In our over-stimulated, technology-driven, instant-gratification filled lives, the age-old practice of mindfulness is more crucial than ever. The American Mindfulness Research Association defines mindfulness as the “state, process and practice of remembering to observe moment-to-moment experience with openness and without automatic patterns of previously conditioned thoughts, emotions or behaviors.” The practice, which often involves meditation, has been shown to have a range of health benefits from improved sleep to decreased anxiety in multiple studies. Related: 4 Tips to Wire Your Brain for Entrepreneurial Wisdom

THE INGREDIENTS OF SELF “A proper balance must be struck between indulgence and severity. However, severity, despite occasional mistakes, is preferable to a lack of discipline.” -I Ching (1150 B.C) Self-discipline is a very powerful tool that can be developed for achieving about anything which you can dream. 7 Things You Gain When You Let Go of Control When you try to control too much, you enjoy too little. Sometimes you just need to let go, relax, take a deep breath and love what is. This morning I met up with an old friend, someone whom I care about deeply but have internally struggled with for years because I’ve always been worried about her health. I want to help her heal, because I feel I’m losing her. I want to teach her the time-tested tools for living a happier, simpler, healthier life that I’ve helped so many other people with — so she can give up her addictions, take up exercise and mindfulness, nurture her needs, and suddenly be transformed into a healthy person again.

5 Morning Rituals to Keep You Productive All Day Long Most of us work long hours: 40, 50 or even 60 hours each week. But chances are, given distractions like online entertainment, office snacking habits and ill-designed time management, we're only churning out high-quality work a portion of each day. Here are five practical steps to incorporate into any morning routine to optimize your time at the office and maintain productivity all day long: 7 minutes of exercise.