3 Common Psychiatric Medication Side Effects No One Talks About. When it comes to psychiatric medications, certain side effects get all the publicity. 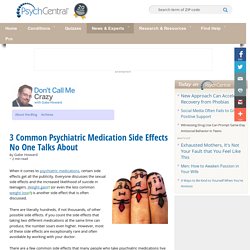 Everyone discusses the sexual side effects and the increased likelihood of suicide in teenagers. Weight gain (or even the less common weight loss. These Anxiety And Sleeping Drugs Linked to Dementia And Death. Drugs prescribed for anxiety, OCD, insomnia, post-traumatic stress disorder and other conditions linked to dementia. 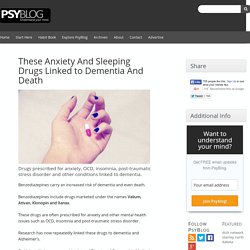 Benzodiazepines carry an increased risk of dementia and even death. Benzodiazepines include drugs marketed under the names Valium, Ativan, Klonopin and Xanax. Antidepressants' Science Is Based On Totally Backward Facts. For 50 years scientists and the public alike have been completely wrong about the biological basis of depression. 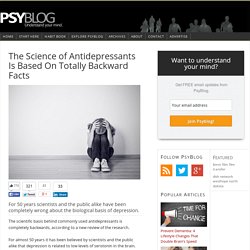 The scientific basis behind commonly used antidepressants is completely backwards, according to a new review of the research. For almost 50 years it has been believed by scientists and the public alike that depression is related to low levels of serotonin in the brain. The most commonly prescribed antidepressant medications — like Prozac, Paxil and Zoloft — are thought to work by keeping serotonin levels higher. So-called selective serotonin re-uptake inhibitors, or SSRIs, block the re-absorption of serotonin into the cells that release it. In fact, the new review finds, the very best evidence available suggests people who are depressed actually have higher levels of serotonin in their brains, not lower. Depression.