In cognitive psychology and decision theory, loss aversion refers to people's tendency to prefer avoiding losses to acquiring equivalent gains: it is better to not lose $5 than to find $5. The principle is very prominent in the domain of economics.

What distinguishes loss aversion from risk aversion is that the utility of a monetary payoff depends on what was previously experienced or was expected to happen. Some studies have suggested that losses are twice as powerful, psychologically, as gains. Why the Most Important Idea in Behavioral Decision-Making Is a Fallacy.

Loss aversion, the idea that losses are more psychologically impactful than gains, is widely considered the most important idea of behavioral decision-making and its sister field of behavioral economics. 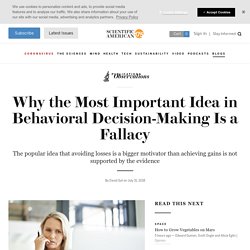 To illustrate the importance loss aversion is accorded, Daniel Kahneman, winner of the 2002 Nobel Prize in economics, wrote in his 2011 best-selling book, Thinking Fast and Slow, that “the concept of loss aversion is certainly the most significant contribution of psychology to behavioral economics.” As another illustration, when Richard Thaler was awarded the 2017 Nobel Prize in economics, the phrase “loss aversion” appeared 24 times in the Nobel Committee’s description of his contributions to science.

Dopamine Suppression and the Neuroscience of Giving Up. A new study in mice suggests that dopamine-suppressing nociceptin neurons in the brain's reward-and-motivation center (called the ventral tegmental area) become very active just before a mouse reaches a breakpoint when it gives up on exerting effort to receive a sugary treat. 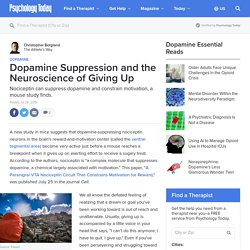 According to the authors, nociceptin is "a complex molecule that suppresses dopamine, a chemical largely associated with motivation. " This paper, "A Paranigral VTA Nociceptin Circuit That Constrains Motivation for Reward," was published July 25 in the journal Cell. article continues after advertisement Source: Pexels We all know the deflated feeling of realizing that a dream or goal you've been working toward is out of reach and unattainable.

As an ultra-endurance athlete, I know from experience that the sudden urge to give up often seems to come out of nowhere. At first, one nose poke dispensed some sucrose, then it took two nose pokes, then five, and so on. Source: Max Huffman. What Is Loss Aversion? Source: By Tomwsulcer (Own work) [CC0], via Wikimedia Commons We don’t like to lose things that we own. 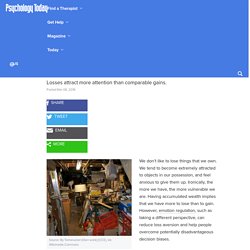 We tend to become extremely attracted to objects in our possession, and feel anxious to give them up. Ironically, the more we have, the more vulnerable we are. Having accumulated wealth implies that we have more to lose than to gain. However, emotion regulation, such as taking a different perspective, can reduce loss aversion and help people overcome potentially disadvantageous decision biases. Why are we so afraid of losing? We are more upset about losing $10 than we are happy finding $10. The idea of loss aversion is shown in consumer behavior. The principle of loss aversion also applies to the emotional pain of scaling back. Endowment effect. In behavioral economics, the endowment effect (also known as divestiture aversion) is the hypothesis that people ascribe more value to things merely because they own them.[1] This is illustrated by the observation that people will tend to pay more to retain something they own than to obtain something owned by someone else—even when there is no cause for attachment, or even if the item was only obtained minutes ago. 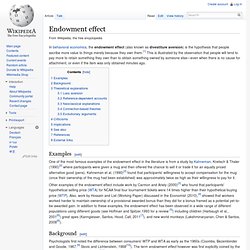 Examples[edit] One of the most famous examples of the endowment effect in the literature is from a study by Kahneman, Knetsch & Thaler (1990)[2] where participants were given a mug and then offered the chance to sell it or trade it for an equally priced alternative good (pens). Kahneman et al. (1990)[2] found that participants' willingness to accept compensation for the mug (once their ownership of the mug had been established) was approximately twice as high as their willingness to pay for it. Background[edit] Theoretical explanations[edit] The Endowment Effect. A strange thing happens in the mind when you buy something. 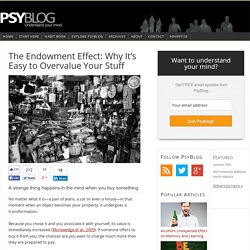 No matter what it is—a pair of jeans, a car or even a house—in that moment when an object becomes your property, it undergoes a transformation. Because you chose it and you associate it with yourself, its value is immediately increased (Morewedge et al., 2009). If someone offers to buy it from you, the chances are you want to charge much more than they are prepared to pay. That is a cognitive bias called ‘the endowment effect’. It’s the reason that some people have lofts, garages and storage spaces full of junk with which they cannot bear to be parted.

When tested experimentally the endowment effect can be surprisingly strong. The endowment effect is particularly strong for things that are very personal and easy to associate with the self, like a piece of jewellery from your partner. Sometimes, of course, the sentimental value of things is justified; but more often than not people hold on to old possessions for no good reason.