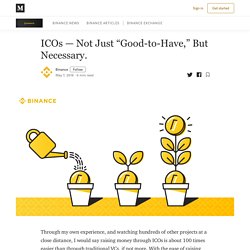 There is a notion that “professional” investors are better than “regular” retail investors at evaluating projects. I believe this notion ignores how the real world of ICOs works — that the “regular” investors work in crowds or hive mind. Is the crowd stronger than VCs when it comes to evaluating projects and due diligence? While some professional VCs investors are truly experts in their field, and genuinely trying to help entrepreneurs, I find the vast majority of “professional VCs” have no clue about the projects or field they invest in. Many of them have zero startup experience and don’t even have a basic understanding of the technologies involved their fields.

As an ICO investor, this, of course, requires you to do your homework too. Scams Scams exist everywhere, in every industry. Failures Most ICOs are new startup projects, and have a high rate of failure, just like in traditional startups. Conclusion. Initial Coin Offering (ICO) DEFINITION of 'Initial Coin Offering (ICO)' An unregulated means by which funds are raised for a new cryptocurrency venture. 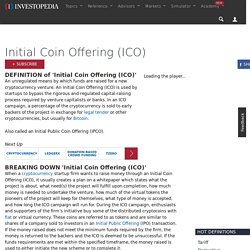 The 10 largest ICO fund raises: successes, controversies and lessons learned. The 11 biggest ICO fundraises of 2017. Tezos is one of the projects that made the list.Thomson Reuters LONDON — 2017 was the year the initial coin offering (ICO) went mainstream. 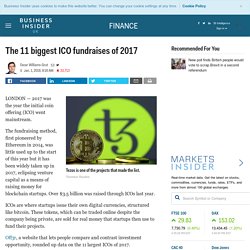 The fundraising method, first pioneered by Ethereum in 2014, was little used up to the start of this year but it has been widely taken up in 2017, eclipsing venture capital as a means of raising money for blockchain startups. Over $3.5 billion was raised through ICOs last year. ICOs are where startups issue their own digital currencies, structured like bitcoin. These tokens, which can be traded online despite the company being private, are sold for real money that startups then use to fund their projects. Off3r, a website that lets people compare and contrast investment opportunity, rounded up data on the 11 largest ICOs of 2017.

Here are the ones that made the list: 11. Total raised: $48 million. ICO date: August. Company location: United States. What it does: Lets you use cryptocurrencies as security for fiat currency loans. 10. ICO Scams 2018 - Programmer explains. Evaluating an Initial Coin Offering (ICO) Can you trust ICO ratings? IEO. How To Invest In An ICO. Investing in an ICO is similar to the investment process for the traditional markets in many ways. 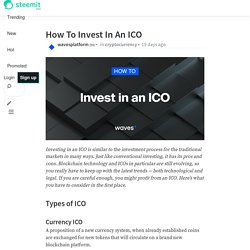 Just like conventional investing, it has its pros and cons. Blockchain technology and ICOs in particular are still evolving, so you really have to keep up with the latest trends — both technological and legal. If you are careful enough, you might profit from an ICO. Here’s what you have to consider in the first place. Currency ICO A proposition of a new currency system, when already established coins are exchanged for new tokens that will circulate on a brand new blockchain platform. Project ICO Issuance of so-called work tokens on an already existing blockchain platform. Easy Access Unlike traditional investing, investing in ICO is literally for everyone — you don’t need to go to the bank or venture fund to invest in a potentially profitable project.