Goldman Sachs Gets Bullish on Bitcoin With a Price Target of $13,971. Institutional Traders Mark Record BTC and ETH Volumes on Derivative Exchanges, Report Says. We’re now well into 2019 and Bitcoin (BTC) has matured into a viable digital asset class, and is thus being widely traded in new markets by institutional investors. 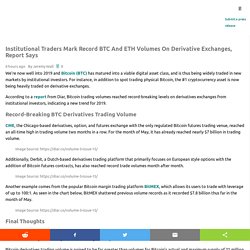 For instance, in addition to spot trading physical Bitcoin, the #1 cryptocurrency asset is now being heavily traded on derivative exchanges. According to a report from Diar, Bitcoin trading volumes reached record-breaking levels on derivatives exchanges from institutional investors, indicating a new trend for 2019. Record-Breaking BTC Derivatives Trading Volume CME, the Chicago-based derivatives, option, and futures exchange with the only regulated Bitcoin futures trading venue, reached an all-time high in trading volume two months in a row.

For the month of May, it has already reached nearly $7 billion in trading volume. Another example comes from the popular Bitcoin margin trading platform BitMEX, which allows its users to trade with leverage of up to 100:1. Final Thoughts. Buzz Factor or Innovation Potential: What Explains Cryptocurrencies’ Returns? Abstract Cryptocurrencies have become increasingly popular since the introduction of bitcoin in 2009. 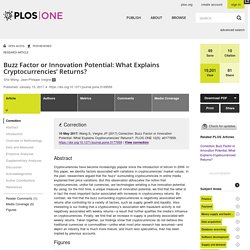 In this paper, we identify factors associated with variations in cryptocurrencies’ market values. In the past, researchers argued that the “buzz” surrounding cryptocurrencies in online media explained their price variations. But this observation obfuscates the notion that cryptocurrencies, unlike fiat currencies, are technologies entailing a true innovation potential. 6 Factors Pushing Bitcoin Prices Higher in 2017. Get Exclusive Analysis and Investing Ideas of Future Assets on Hacked.com. 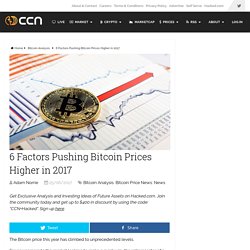 Join the community today and get up to $400 in discount by using the code: "CCN+Hacked". Sign up here. Four factors driving the price of Bitcoin. The price of Bitcoin has dropped to around A$8,000 in the last few days, after almost hitting A$10,000 in the past month, and rising over 1,850% since 2015. 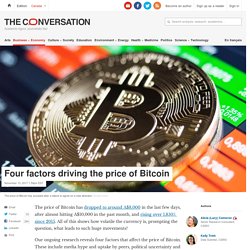 All of this shows how volatile the currency is, prompting the question, what leads to such huge movements? Our ongoing research reveals four factors that affect the price of Bitcoin. These include media hype and uptake by peers, political uncertainty and risk (such as the election of Donald Trump or the vote for Brexit), moves by governments and regulators, and the governance of Bitcoin itself. It is likely the last factor that has driven the latest drop in the price, as a proposed Bitcoin split (or “fork”) failed to gain support from developers towards the end of last week. The split would have doubled the number of coins in circulation (as previous splits have) and increased transaction speed. 1) Animal spirits Economists have long had a notion that psychological factors affect investor decisions. 2) Political risk 3) Regulatory moves. 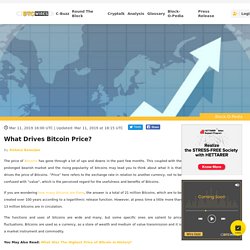 This coupled with the prolonged bearish market and the rising popularity of bitcoins may lead you to think about what it is that drives the price of Bitcoins. If you are wondering how many bitcoins are there, the answer is a total of 21 million Bitcoins, which are to be created over 100 years according to a logarithmic release function. The functions and uses of bitcoins are wide and many, but some specific ones are salient to price fluctuations. What Determines the Price of 1 Bitcoin? Bitcoin is a cryptocurrency based on specifications outlined by Satoshi Nakamoto in 2009. 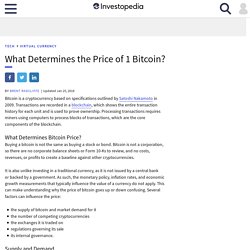 Transactions are recorded in a blockchain, which shows the entire transaction history for each unit and is used to prove ownership. Processing transactions requires miners using computers to process blocks of transactions, which are the core components of the blockchain. What Determines Bitcoin Price? Buying a bitcoin is not the same as buying a stock or bond. Bitcoin is not a corporation, so there are no corporate balance sheets or Form 10-Ks to review, and no costs, revenues, or profits to create a baseline against other cryptocurrencies. It is also unlike investing in a traditional currency, as it is not issued by a central bank or backed by a government. The supply of bitcoin and market demand for itthe number of competing cryptocurrenciesthe exchanges it is traded onregulations governing its saleits internal governance. Supply and Demand.

Factors Influencing Bitcoin Price. With Bitcoin prices soaring past $20,000, the cryptocurrency has broken all predictions about its impending crash. 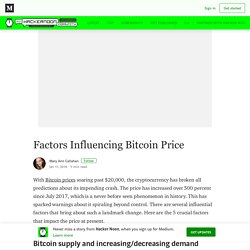 The price has increased over 500 percent since July 2017, which is a never before seen phenomenon in history. This has sparked warnings about it spiraling beyond control. There are several influential factors that bring about such a landmark change. Here are the 5 crucial factors that impact the price at present. Bitcoin supply and increasing/decreasing demand. Bitcoin Price: ‘More Blood to Come’ as Cryptocurrency Crashes Below $6,000. How You Could Get Crushed By Bitcoin. Bitcoin Price Rallies As IMF Boss Christine Lagarde Praises Blockchain, Distributed Ledgers.