Nietzsche on How to Find Yourself and the True Value of Education. “Do you have the courage to bring forth the treasures that are hidden within you?” 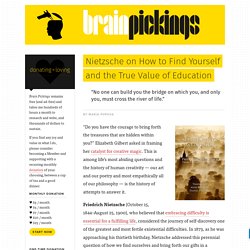 Elizabeth Gilbert asked in framing her catalyst for creative magic. This is among life’s most abiding questions and the history of human creativity — our art and our poetry and most empathically all of our philosophy — is the history of attempts to answer it. Friedrich Nietzsche (October 15, 1844–August 25, 1900), who believed that embracing difficulty is essential for a fulfilling life, considered the journey of self-discovery one of the greatest and most fertile existential difficulties. In 1873, as he was approaching his thirtieth birthday, Nietzsche addressed this perennial question of how we find ourselves and bring forth our gifts in a beautiful essay titled Schopenhauer as Educator (public library), part of his Untimely Meditations.

Nietzsche, translated here by Daniel Pellerin, writes: Any human being who does not wish to be part of the masses need only stop making things easy for himself. Philosopher Erich Fromm on the Art of Loving and What Is Keeping Us from Mastering It. “To love without knowing how to love wounds the person we love,” the great Zen teacher Thich Nhat Hahn admonished in his terrific treatise on how to love — a sentiment profoundly discomfiting in the context of our cultural mythology, which continually casts love as something that happens to us passively and by chance, something we fall into, something that strikes us arrow-like, rather than a skill attained through the same deliberate practice as any other pursuit of human excellence. 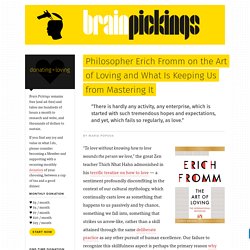 Our failure to recognize this skillfulness aspect is perhaps the primary reason why love is so intertwined with frustration. Be Like Water: The Philosophy and Origin of Bruce Lee’s Famous Metaphor for Resilience. With his singular blend of physical prowess and metaphysical wisdom, coupled with his tragic untimely death, legendary Chinese-American martial artist, philosopher, and filmmaker Bruce Lee (November 27, 1940–July 20, 1973) is one of those rare cultural icons whose ethos and appeal remain timeless, attracting generation after generation of devotees. 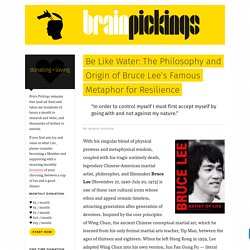 Inspired by the core principles of Wing Chun, the ancient Chinese conceptual martial art, which he learned from his only formal martial arts teacher, Yip Man, between the ages of thirteen and eighteen. When he left Hong Kong in 1959, Lee adapted Wing Chun into his own version, Jun Fan Gung Fu — literal translation: Bruce Lee’s Kung Fu — and popularized it in America. Kierkegaard on the Individual vs. the Crowd, Why We Conform, and the Power of the Minority. By Maria Popova. 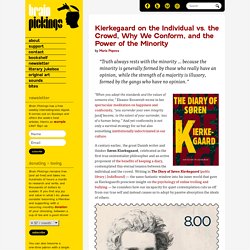 Jack Kerouac on Kindness, the Self Illusion, and the “Golden Eternity” By Maria Popova “Practice kindness all day to everybody and you will realize you’re already in heaven now.” 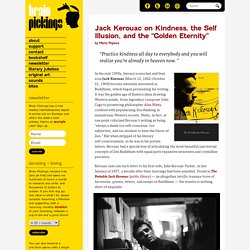 Kafka on Love and Patience. By Maria Popova One March morning in 1920, a Czech teenager named Gustav Janouch arrived at the Workman’s Accident Insurance Institution, where his father worked. 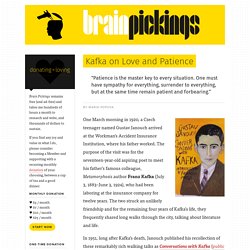 The purpose of the visit was for the seventeen-year-old aspiring poet to meet his father’s famous colleague, Metamorphosis author Franz Kafka (July 3, 1883–June 3, 1924), who had been laboring at the insurance company for twelve years. A Unique Trust Placed in Chance and Eternity: How Real Love Begins and What Makes It Flourish Over Time.

By Maria Popova “An honorable human relationship … in which two people have the right to use the word ‘love,’” Adrienne Rich memorably wrote, “is a process, delicate, violent, often terrifying to both persons involved, a process of refining the truths they can tell each other.” 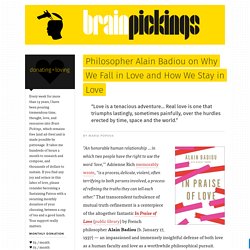 That transcendent turbulence of mutual truth-refinement is a centerpiece of the altogether fantastic In Praise of Love (public library) by French philosopher Alain Badiou (b. January 17, 1937) — an impassioned and immensely insightful defense of both love as a human faculty and love as a worthwhile philosophical pursuit. A century after Tolstoy wrote to Gandhi that “love is the only way to rescue humanity from all ills,” Badiou argues that love is the most potent antidote to the self-interest that dominates the modern world and our greatest hope for bridging the gaping divide between self and other: Love cannot be reduced to the first encounter, because it is a construction.

Bukowski’s Letter of Gratitude to the Man Who Helped Him Quit His Soul-Sucking Job and Become a Full-Time Writer. Oliver Sacks on Gratitude, the Measure of Living, and the Dignity of Dying. By Maria Popova “Living has yet to be generally recognized as one of the arts,” proclaimed a 1924 guide to the art of living. 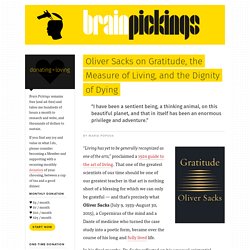 The Soul of an Octopus: How One of Earth’s Most Alien Creatures Illuminates the Wonders of Consciousness. “Despite centuries of investigation by everyone from natural historians, psychologists, and psychiatrists, to ethicists, neuroscientists, and philosophers, there is still no universal definition of emotion or consciousness,” Laurel Braitman wrote in her terrific exploration of the mental lives of animals. 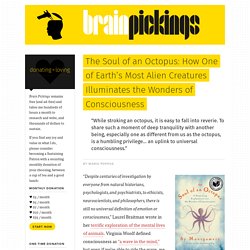 Virginia Woolf defined consciousness as “a wave in the mind,” but even if we’re able to ride the wave, we hardly know the ocean out of which it arises. During my annual visit to NPR’s Science Friday to discuss my choices for the year’s best science books, my co-guest — science writer extraordinaire Deborah Blum — mentioned a fascinating book that had slipped my readerly tentacles, one that addresses this abiding question of consciousness with unparalleled rigor and grace: The Soul of an Octopus: A Surprising Exploration into the Wonder of Consciousness (public library) by naturalist, writer, and documentary filmmaker Sy Montgomery.