Django Favicon Tutorial - William Vincent. This tutorial explains how to add a favicon to a Django website.

The trick is it requires configuring your static files properly. Complete source code can be found on Github. To start things off, create a local directory for your code. This can exist anywhere easily accessible but if you’re on a Mac (as I am) the Desktop is a convenient choice. Navigate there from the command line and create a new directory called favicon, then change into it. $ cd ~/Desktop $ mkdir favicon $ cd favicon Now install Django with Pipenv and start the virtual environment with the shell command. Authentication. Introduction · Django Girls Tutorial. 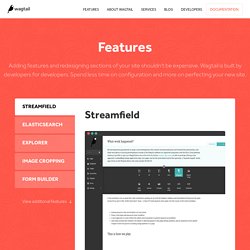 We used the OpenCV library to build feature detection into the image upload process: when you upload an image Wagtail detects features and faces (single or multiple) and stores their coordinates. It then uses this information to intelligently crop images when they’re output, respecting the composition of photos and making sure that their subjects are visible and nicely framed. Custom cropping You can also optionally override the default, detected focal point and define your own by drawing a marquee over the region of the image you want to make sure Wagtail never crops out. 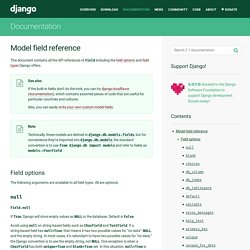 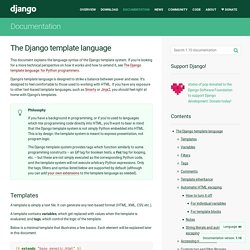 Philosophy If you have a background in programming, or if you’re used to languages which mix programming code directly into HTML, you’ll want to bear in mind that the Django template system is not simply Python embedded into HTML. Templates¶ A template is simply a text file. A template contains variables, which get replaced with values when the template is evaluated, and tags, which control the logic of the template. Tango with Django. LinkedIn Social Authentication in Django. Introduction · Django Girls Tutorial. Python Programming Tutorials. Model field reference. Field options¶ The following arguments are available to all field types. 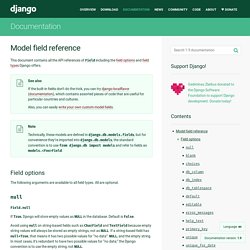 All are optional. null¶ Field.null¶ If True, Django will store empty values as NULL in the database. Avoid using null on string-based fields such as CharField and TextField because empty string values will always be stored as empty strings, not as NULL. For both string-based and non-string-based fields, you will also need to set blank=True if you wish to permit empty values in forms, as the null parameter only affects database storage (see blank). Note When using the Oracle database backend, the value NULL will be stored to denote the empty string regardless of this attribute. 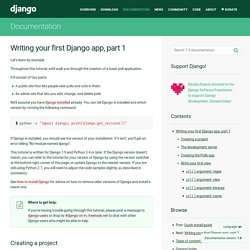 Throughout this tutorial, we’ll walk you through the creation of a basic poll application. It’ll consist of two parts: A public site that lets people view polls and vote in them.An admin site that lets you add, change, and delete polls. Current Django Books – Two Scoops Press. This page is a complete list of Django web framework published books that are current, deprecated, and outdated. 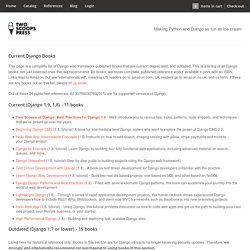 This is a listing of all Django books, not just selected ones that we recommend. By books, we mean complete, published reference works available in print with an ISBN. Links lead to Amazon, but are "internationalized", meaning US readers go to amazon.com, UK readers go to amazon.co.uk, and so forth. If there are any books not on this list, please let us know.

Out of these 26 published references, 42.30769230769231% are for supported versions of Django. Django - Full Stack Python. Django is a widely-used Python web application framework with a "batteries-included" philosophy. 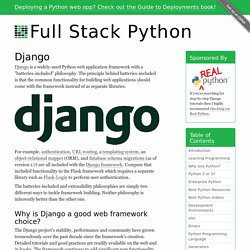 The principle behind batteries-included is that the common functionality for building web applications should come with the framework instead of as separate libraries. For example, authentication, URL routing, a templating system, an object-relational mapper (ORM), and database schema migrations (as of version 1.7) are all included with the Django framework. Compare that included functionality to the Flask framework which requires a separate library such as Flask-Login to perform user authentication. The batteries-included and extensibility philosophies are simply two different ways to tackle framework building.

Simplifying Django. The following comes to you from Julia Elman and Mark Lavin. 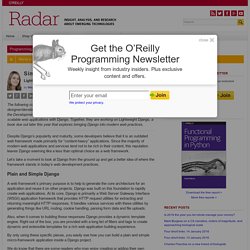 Julia is a a hybrid designer/developer who has been working her brand of web skills since 2002; and Mark is the Development Director at Caktus Consulting Group in Carrboro, NC where he builds scalable web applications with Django. Together, they are working on Lightweight Django, a book due out later this year that explores bringing Django into modern web practices. Despite Django’s popularity and maturity, some developers believe that it is an outdated web framework made primarily for “content-heavy” applications. Since the majority of modern web applications and services tend not to be rich in their content, this reputation leaves Django seeming like a less than optimal choice as a web framework.

Let’s take a moment to look at Django from the ground up and get a better idea of where the framework stands in today’s web development practices. Twilio Cloud Communications - APIs for Voice, VoIP, and Text Messaging. How It Works Ready to implement appointment reminders in your application? 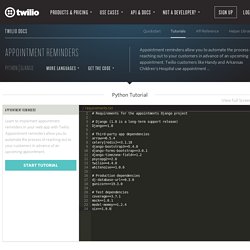