How Much Do You Know About Data Privacy? Test Yourself. Anxiety about data privacy has reached a fever pitch. 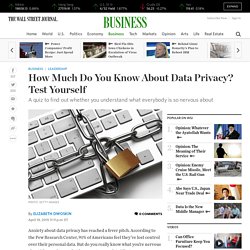 According to the Pew Research Center, 91% of Americans feel they’ve lost control over their personal data. But do you really know what you’re nervous about? Do you know what happens to your data? Test your knowledge about digital privacy with the following quiz. 1. A. B. Call for teens to self-regulate net use. ▶ Harassment In The Games World - YouTube. Rebel X. BBC - Homepage. The Anti-Social Network - Short Film. 10 Team-Building Games That Promote Collaborative Critical Thinking. One of education’s primary goals is to groom the next generation of little humans to succeed in the “real world.” 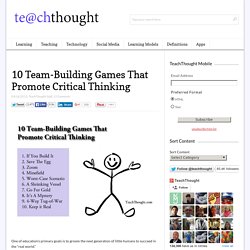 Yes, there are mounds of curricula they must master in a wide breadth of subjects, but education does not begin and end with a textbook or test. Other skills must be honed, too, not the least of which is how to get along with their peers and work well with others. This is not something that can be cultivated through rote memorization or with strategically placed posters.

Students must be engaged and cooperation must be practiced, and often. The following team-building games can promote cooperation and communication, help establish a positive classroom environment and — most importantly — provide a fun, much-needed reprieve from routine. 10 Team-Building Games That Promote Collaborative Critical Thinking 1. This team-building game is flexible. You can recycle this activity throughout the year by adapting the challenge or materials to specific content areas. Privacy (TBD): In the online space, what is private may depend on who you are and where you live. Credit: Mark Ostow Urs Gasser asks his students to join him in developing a navigation aid for an emerging field. 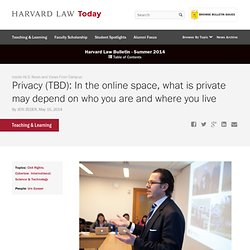 As Professor of Practice Urs Gasser LL.M. ’03 sets up his PowerPoint and students deploy their notebooks and laptops, a riff of music drifts by. The tune soon reveals itself as a jazz version of the Beatles classic “Here, There and Everywhere”—a title that’s evocative of the global subject covered in this seminar, Comparative Online Privacy. Gasser stops the music. He typically starts class by tossing out a “proposition” for discussion. Past classes have explored “You have zero privacy anyway. Credit: Mark Ostow Feola Odeyemi ’16 Feola Odeyemi ’16 speaks up. “Your response nicely aligns with a position that sees privacy as both context- and culture-specific,” Gasser tells Odeyemi. Profile of @CCSDBYOD. Copyright Flowchart: Can I Use It? Yes? No? If This… Then… It is the responsibility of all educators to model good digital citizenship for their students. 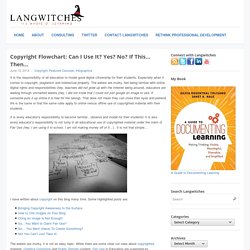 Especially when it comes to copyright, plagiarism and intellectual property. The waters are murky. Not being familiar with online digital rights and responsibilities (hey, teachers did not grow up with the Internet being around), educators are wading through uncharted waters (hey, I did not know that I could not just google an image to use. If someone puts it up online it is free for the taking). That does not mean they can close their eyes and pretend life is the same or that the same rules apply to online versus offline use of copyrighted material with their students. It is every educator’s responsibility to become familiar , observe and model for their students! I have written about copyright on this blog many time. The waters are murky, it is not an easy topic. We have ubiquitous digital access, ease of duplication and distribution of information. Related 30.

Student convinced family she was on trip around Asia - despite never leaving her bedroom. Zilla leaving before and after[Caters ] After waving goodbye to her family at the airport, Zilla Van Den Born, 25, went to extraordinary lengths to fool her friends into thinking she was travelling through Thailand, Cambodia and Laos by mocking up photographs of exotic food and tourist attractions. 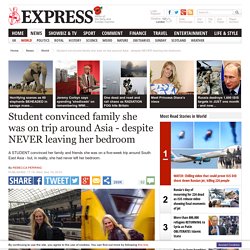 Little did they know Ms Van Den Born, from Amsterdam, was actually sat on her sofa. To carry out her ruse, she had faked Skype calls to her parents under Christmas lights and a Thai umbrella, while also sending texts in the middle of the night to add to her credibility. Zilla in her set up cafe on Skype [Caters ] My goal was to prove how common and easy it is to distort reality. The backpack of lies was all part of her university graduation project, to show how social media does not always reflect reality. Brain-Dead Teen, Only Capable Of Rolling Eyes And Texting, To Be Euthanized. ‘Noah’ a surprisingly compelling short film was ‘filmed’ entirely on a computer screen. 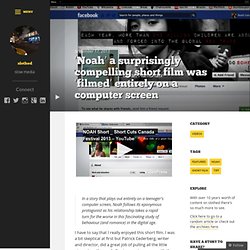 </p> In a story that plays out entirely on a teenager’s computer screen, Noah follows its eponymous protagonist as his relationship takes a rapid turn for the worse in this fascinating study of behaviour (and romance) in the digital age. I have to say that I really enjoyed this short film. I was a bit skeptical at first but Patrick Cederberg, writer and director, did a great job of pulling all the little pieces together and allowing you to engage with the characters. The film was viewed at the Toronto International Film Festival, which just ended, in the special events – student film showcase.