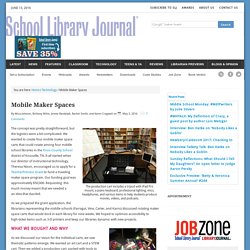 The concept was pretty straightforward, but the logistics were a bit complicated. We wanted to create four mobile maker space carts that could rotate among four middle school libraries in the Knox County School district of Knoxville, TN. It all started when our director of instructional technology, Theresa Nixon, encouraged us to apply for a TeacherPreneur Grant to fund a traveling maker space program.

Our funding goal was approximately $50,000. Requesting this much money meant that we needed a an idea that dazzled. Makerspace Starter Kit. The hot new Makerspace Movement is NOT new to Murray Hill Middle School.

Eighteen years ago we designed and opened the school with the idea that we would have creation labs in the Media Center, GT room, and the TV studio. 6 Fun Ways Kids Can Join the Maker Movement. Children are natural makers — give a kid a cardboard box, and she’ll transform it immediately into an oven, a spaceship, an elevator, or something else that I probably cannot imagine. 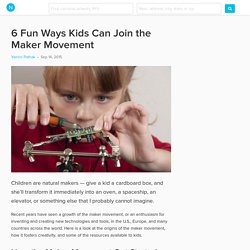 Recent years have seen a growth of the maker movement, or an enthusiasm for inventing and creating new technologies and tools, in the U.S., Europe, and many countries across the world. Here is a look at the origins of the maker movement, how it fosters creativity, and some of the resources available to kids. How the Maker Movement Got Started The maker movement has its origins in the do-it-yourself (DIY) attitude. Dale Dougherty is credited with having started the movement with the launch of Make: magazine in 2005.

A Librarian's Guide to Makerspaces: 16 Resources. "There were more than 135 million adult makers, more than half of the total adult population in America, in 2015.

" What is a makerspace? You’ve no doubt been hearing that word more than a few times over the past several years. Beginner’s Guide to Maker-ize An Elementary Classroom – HonorsGradU. When most penny-pinching, time-crunched, and exhausted teachers hear about lofty ideas like the MakerSpace movement in education, they are likely to dismiss it as another passing and impractical fad. 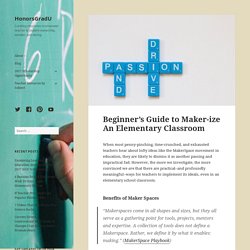 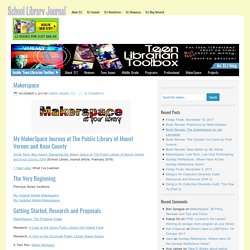 MakerSpaces: new tradition in context. Generally, a MakerSpace is considered a place where informal, collaborative learning and discovery take place through hands on creation, via use of any combination of art and technology. 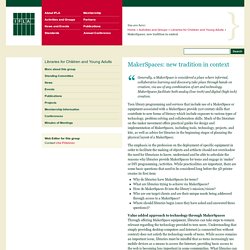 MakerSpaces facilitate both analog (low-tech) and digital (high tech) creation. Teen library programming and services that include use of a MakerSpace or equipment associated with a MakerSpace provide 21st century skills that contribute to new forms of literacy which include exposure to various types of technology, problem solving and collaboration skills.

Much of the literature on the maker movement offers practical guides for design and implementation of MakerSpaces, including tools, technology, projects, and kits, as well as advice for libraries in the beginning stages of planning the physical layout of a MakerSpace. Why do libraries have MakerSpaces for teens? What are libraries trying to achieve via MakerSpaces? Value added approach to technology through MakerSpaces user driven peer directed. Starting a School Makerspace from Scratch. With the National Week of Making behind us, you might be ready to start a makerspace in your school -- but not know where to start. 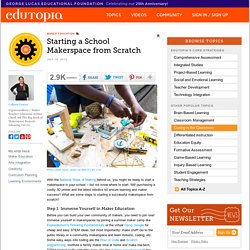 Will purchasing a costly 3D printer and the latest robotics kit ensure learning and maker success? What are some steps to starting a successful makerspace from scratch? Step 1: Immerse Yourself in Maker Education Before you can build your own community of makers, you need to join one! Immerse yourself in makerspaces by joining a summer maker camp like Exploratorium's Tinkering Fundamentals or the virtual Camp Google for cheap and easy STEM ideas, but most importantly: make stuff! Step 2: Get Others Involved Start a steering committee for your makerspace by involving interested teachers and students. If you can, reach out to the community and get parents and community members involved. How to Run an AWESOME After-school Makers Club. How to Start a Makerspace When You're Broke. Everyone’s Favorite Excuse I’ve had the honor and privilege of sharing with hundreds of librarians and educators about our makerspace. 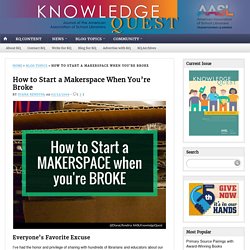 Unfortunately, I see many educators hold back on starting a makerspace because of funds. I’m always hearing excuses like: “I’d love to do (insert cool Maker activity) at my school, but we don’t have a budget for that.” “We can’t really afford a 3D printer right now.” What many people don’t realize is that the idea that you need a lot of money to start a Makerspace is a myth. Share Your Vision with ALL THE PEOPLE You want to start a makerspace. Recycled materials can make for awesome projects Seek out Donations Never discount the value of donated materials.

How Libraries Are Becoming Modern Makerspaces. If you could ask Ben Franklin what public institution he would like to visit in America today, I bet he would say the public library. 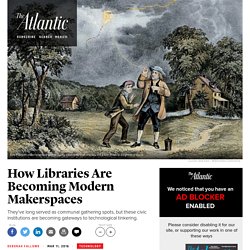 And if you asked him which part of the library, I bet he would say the makerspace. Ben Franklin is well known as a founder of the early subscription library, the Philadelphia Library Company, almost 300 years ago. It may be less well known that Franklin used the library’s space for some of his early experiments with electricity. Today, perhaps taking a cue from Franklin, libraries across America are creating space for their patrons to experiment with all kinds of new technologies and tools to create and invent. As I wrote in a short piece in the March issue of The Atlantic, called The Library Card: Miguel Figueroa, who directs the Center for the Future of Libraries at the American Library Association, says makerspaces are part of libraries’ expanded mission to be places where people can not only consume knowledge, but create new knowledge.