Starting a School Makerspace from Scratch 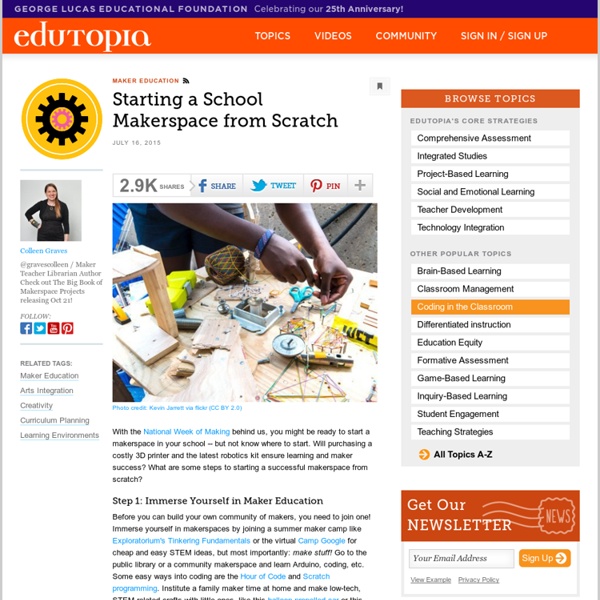 With the National Week of Making behind us, you might be ready to start a makerspace in your school -- but not know where to start. Will purchasing a costly 3D printer and the latest robotics kit ensure learning and maker success? What are some steps to starting a successful makerspace from scratch? Step 1: Immerse Yourself in Maker Education Before you can build your own community of makers, you need to join one! Immerse yourself in makerspaces by joining a summer maker camp like Exploratorium's Tinkering Fundamentals or the virtual Camp Google for cheap and easy STEM ideas, but most importantly: make stuff! Step 2: Get Others Involved Start a steering committee for your makerspace by involving interested teachers and students. If you can, reach out to the community and get parents and community members involved. Step 3: Purchasing Makerspace Resources Here are three guidelines: What purchases will give you the most bang for your buck? Step 4: Building a Community of Makers

Designing a School Makerspace Makerspaces, STEAM labs and fab labs are popping up in schools across the country. Makerspaces provide hands-on, creative ways to encourage students to design, experiment, build and invent as they deeply engage in science, engineering and tinkering. A makerspace is not solely a science lab, woodshop, computer lab or art room, but it may contain elements found in all of these familiar spaces.

uTEC Maker Model he uTEC Maker Model visualizes the developmental stages of creativity from individuals and groups as they develop from passively using a system or process to the ultimate phase of creativity and invention. As illustrated in the model below, there arefour levels of expertise. A Makerspace participant begins at the Using level. A User enjoys engaging in an activity to sample something new. How to Turn Any Classroom Into a Makerspace There is a certain magic found in rolling up your sleeves and tackling a project head on, an undeniable sense of empowerment that results from solving problems and manifesting big ideas. In essence, that’s the soul of the maker movement — creative individuals from all walks of life united by an insatiable desire to improve the world around them. Although synonymous with 3D Printing, it extends far beyond a single technology or buzzword. Truth be told, the maker movement represents the instinctual drive of our species to ascend ever upwards: to innovate, design, and construct a better tomorrow. Why the Maker Movement is Relevant to Education

Advocating for Makerspaces in Libraries Since I first started my Makerspace at Stewart Middle Magnet School in January 2014, I have received a lot of positive feedback. I’ve given talks, presented at conferences, and shared about our experiences through my blog and through social media. Some of the questions I am most frequently asked are: Why should makerspaces be in the library? The (Latecomer) Beginner's Guide To Minecraft Minecraft first came out in 2009; but just a few weeks ago it debuted on the current console generation. What makes this game endure, 5 years later – with over 15 million licensed players on the PC/Mac alone? It’s awesome, that’s what. If you’re late to the party though, don’t worry – this extensive beginner’s guide has you covered. Curious about classroom Makerspaces? Here’s how to get started. Makerspace is a rapidly growing trend in schools across the country, but to be honest, I’ve never implemented one myself, and I can’t quite picture the logistics of orchestrating a Makerspace. How do kids know what to do? How can you find out what they’re learning?

ISTE 2015: Takeaway Tips for a Library Maker Space Maker station at the ISTE Librarians Digital Age Playground at the 2015 ISTE conference in Philadelphia. The maker movement was front and center at the 2015 ISTE conference—and that’s a good thing for me. After following maker initiatives with great interest for some time now, I have the opportunity to design a maker space this year for 6th–12th grade students at my school, Worcester (MA) Academy. A search of this year’s program at ISTE, held June 28 to July 1 in Philadelphia, using the term “constructivist learning/maker movement” resulted in 67 related sessions. The ISTE Librarians Network hosted a maker station at their Digital Age Playground and convened a panel on library maker spaces, featuring elementary and middle school librarians, a school administrator, and the coordinator of a public library maker initiative. Vendors and exhibitors demonstrated tools, lessons, and ideas for maker spaces.

8 Design Steps for an Academic Makerspace Hands-on Learning Page 2 of 2 8 Design Steps for an Academic Makerspace "Without this component, we see a lot of failures," he added. Want to Start a Makerspace at School? Tips to Get Started As the Maker Movement starts to gain momentum, schools that are trying to find ways to foster the do-it-yourself environment can learn a few lessons from another nexus in the universe: public libraries. Dale Dougherty, founding editor and publisher of Make Magazine — and the de facto leader of the Maker Movement — has a vision to create a network of libraries, museums, and schools with what he calls “makerspaces” that draw on common resources and experts in each community. Libraries and museums, he said, are easier places to incorporate makerspaces than schools, because they have more space flexibility and they’re trying to attract teens with their programs.

Colleen Graves 2015 Sources are not cited in the article. I use edtopia frequently in teaching so I am familiar with this website and articles. It gives straight forward and hands on ideas for creating a makerspace at school. Great information. by mariegaskins Jul 13