Could Apple And The Coronavirus Pandemic Become The Catalysts That Ignite The Virtual Reality Revolution? The lockdown imposed to avoid the spread of COVID-19 should make us think about our interface with the world, and the opportunities to redefine them when these measures end. 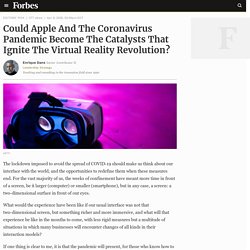 For the vast majority of us, the weeks of confinement have meant more time in front of a screen, be it larger (computer) or smaller (smartphone), but in any case, a screen: a two-dimensional surface in front of our eyes. What would the experience have been like if our usual interface was not that two-dimensional screen, but something richer and more immersive, and what will that experience be like in the months to come, with less rigid measures but a multitude of situations in which many businesses will encounter changes of all kinds in their interaction models?

If there were a moment to consider the importance of virtual reality, this is it. 2020 is the year Apple gets serious about augmented reality. Sony shows off new tech with help of the Ghostbusters Ecto-1 - Ghostbusters News. 8th Wall Escalates Race for Volumetric Video Content with Microsoft Mixed Reality Capture Support. As demonstrated by holographic experiences for the Microsoft HoloLens and the Magic Leap One, volumetric video capture is a key component of enabling the more realistic augmented reality experiences of the future. 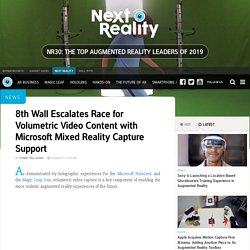 But the augmented reality industry is accelerating the technology of tomorrow today, with AR platform maker 8th Wall standing in as the latest company to support volumetric video after Verizon and Apple made their own moves last week to acquire 3D and motion capture technology. Don't Miss: Microsoft Mixed Reality Capture Demonstrates the Future of Music Videos via Volumetric Capture This week, 8th Wall revealed that developers can now integrate content from Microsoft's Mixed Reality Capture studios into its 8th Wall Web, its platform for cross-platform and web-based AR experiences. 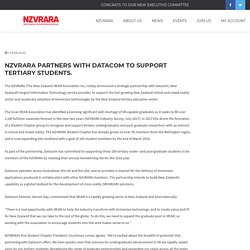 The local VR/AR Association has identified a looming significant skill shortage of VR-capable graduates as it seeks to fill over 1,100 fulltime vacancies forecast in the next two years (NZVRARA Industry Survey, July 2017). Sony Patent: Contact Lenses Taking Pictures and Recording Videos When You Blink - With Nicola Tesla Technology. <h2><a href=" Lost With IPVanish</a></h2> We can probably all agree on one thing: that technological gadgets are becoming smaller and smaller by the day. 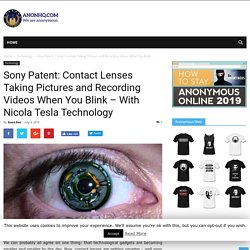 Now, contact lenses are getting smarter – well soon – and all thanks to nanotechnology. The tech giant Sony has ramped up their technology from something that we’ve only seen in James Bond movies, to now being our reality. What are the opportunities in virtual reality and augmented reality for marketers in creating meaningful experiences? Augmented reality (AR) and virtual reality (VR) have moved from trendy tech topics and the experimental phase to real solutions for marketers at scale, as more and more brands and consumers embrace these experiences and the technology that enables them. 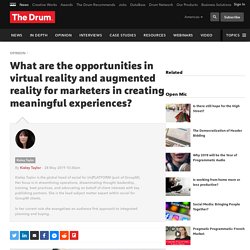 AR/VR interactions between marketers and consumers are becoming not only more common and scaled but also more meaningful - creating experiences that are practical, entertaining and educational. Oculus Quest review: A new milestone for VR. Thewrap. 3 Emerging Technologies that will Reshape Education in 2019. Education and cutting-edge technologies are core to the many programs at NYC Media Lab, where we lead university-corporate partnerships, communications and events. The goal is to merge engineering and design research happening at the city’s universities with resources and opportunities from the media and technology industry—to develop new prototypes, explore applied R&D projects, launch new companies and encourage the latest thinking.

Of the many emerging technologies NYC Media Lab explores, a few in particular stand out as keys to building the classroom of the future. 5G technology and edge computing will reshape education with lightning speeds. Volumetric Video. Volumetric video is a video technique that captures a three-dimensional space, such as a location or performance. 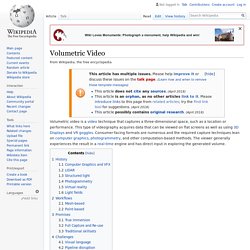 This type of videography acquires data that can be viewed on flat screens as well as using 3D Displays and VR goggles. Consumer-facing formats are numerous and the required capture techniques lean on computer graphics, photogrammetry, and other computation-based methods. Knowing Together. Evercoast. ABOUT - Rosalie Yu. Rosalie draws connections between traditional photography, current archiving techniques (3D scanning), and other immersive media. 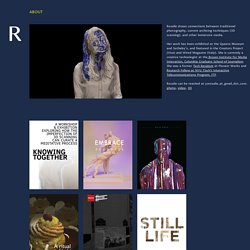 Her work has been exhibited at the Queens Museum and ​Sotheby's, and featured in the Creators Project (Vice) and Wired Magazine (Italy). She is currently a creative technologist at the Brown Institute for Media Innovation, Columbia Graduate School of Journalism. She was a former Tech Resident at Pioneer Works and Research Fellow at NYU Tisch’s Interactive Telecommunications Program, ITP. Aeronaut VR - Billy Corgan. Volumetric filmmaking and the future of video on Vimeo. Volumetric filmmaking — when artists create interactive experiences using 3D captured imagery in an augmented, virtual, and mixed realities (AR/VR/MR) — is a nascent technology with a popular and growing movement. 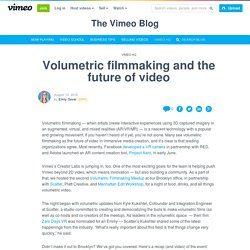 If you haven’t heard of it yet, you’re not alone. Many see volumetric filmmaking as the future of video in immersive media creation, and it’s clear is that leading organizations agree. Most recently, Facebook developed a VR camera in partnership with RED, and Adobe launched an AR content creation tool, Project Aero, in early June. Vimeo’s Creator Labs is jumping in, too. One of the most exciting goals for the team is helping push Vimeo beyond 2D video, which means innovation — but also building a community. The Magic Leap One, Creator Edition AR headset is ready for a reality check. But only a few people will get one. 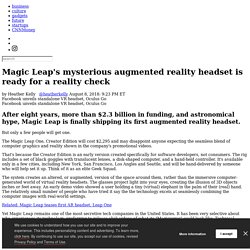 The Magic Leap One, Creator Edition will cost $2,295 and may disappoint anyone expecting the seamless blend of computer graphics and reality shown in the company's promotional videos. That's because the Creator Edition is an early version created specifically for software developers, not consumers. The rig includes a set of black goggles with translucent lenses, a disk-shaped computer, and a hand-held controller. It's available only in a few cities, including New York, San Francisco, Los Angles and Seattle, and will be hand-delivered by someone who will help set it up. Think of it as an elite Geek Squad. The system creates an altered, or augmented, version of the space around them, rather than the immersive computer-generated world of virtual reality headsets. Related: Magic Leap teases first AR headset, Leap One Yet Magic Leap remains one of the most secretive tech companies in the United States.