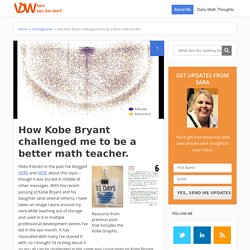 In the past I’ve blogged HERE and HERE about this topic – though it was buried in middle of other messages. With the recent passing of Kobe Bryant and his daughter (and several others), I have taken an image I wore around my neck while teaching out of storage and used in it in multiple professional development events I’ve led in the last month. It has resonated with many I’ve shared it with, so I thought I’d re-blog about it so you all can be challenged in the same way I have been by Kobe Bryant and a graphic representing his NBA career.

Feel free to watch this short video explaining this OR read below the video link for more. The Power Of Can't... Words have power...we know this...we say this, but let us really think about this. 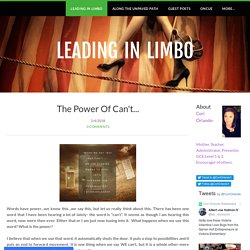 There has been one word that I have been hearing a lot of lately- the word is "can't". It seems as though I am hearing this word, now more then ever. Sal Khan: Test Prep Is ‘the Last Thing We Want to Be’ For most of us, hearing something just once isn’t nearly enough to commit it to memory. 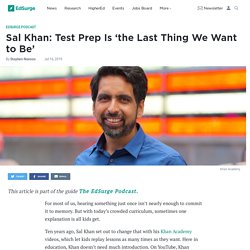 But with today’s crowded curriculum, sometimes one explanation is all kids get. Ten years ago, Sal Khan set out to change that with his Khan Academy videos, which let kids replay lessons as many times as they want. Here in education, Khan doesn’t need much introduction. One-Hole Punch Puzzle Templates. Recently Lowrie et al. published an article in the Journal of Experimental Education where they looked at the effects of a spatial intervention program for grade 8 students. 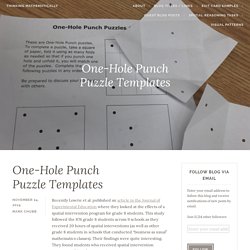 This study followed the 876 grade 8 students across 9 schools as they received 20 hours of spatial interventions (as well as other grade 8 students in schools that conducted “business as usual” mathematics classes). Their findings were quite interesting. How do you encourage Ss to reflect on their assessment results and further grow their learning? T @mrsbistro created these error-analyzing forms! #masterychat #iteachmath… #FCTM2019… Thanks! They started with “how would you solve this?” Then said something nice like “that strategy works!” Then “can I show you my strategy?” Then “do you want to try that on a new problem?”… We took the 1st and 4th graders out to convince the public that no one is “bad at math”. Most adults used standard algorithm, and kids asked “can we show you a more efficient strategy?” (Like friendly numbers for adding 39+43) They loved being the teacher.

Please help me understand why this is so hard for so many legislators and educational administrators to internalize??? Thank you @gcouros… Dr. Bryan Harris sur Twitter : "1000 Hours! Have you ever thought about it that way before? That's about the number of hours kids spend with teachers each school year. That's enough to ignite a love of learning that will last a lifetime. It's also enough. Why We Should Reconsider Using Worksheets (And What We Should Be Doing Instead) El201605 takeaways. Strategies versus Models: Why This Is Important – Pam Harris. Interview on Science Friday – Pam Harris. I had the wonderful privilege of talking with Ira Flatow on Friday, August 26, 2016, on the Public Radio International show Science Friday, along with guests Andrew Hacker and Maria Droujkova. 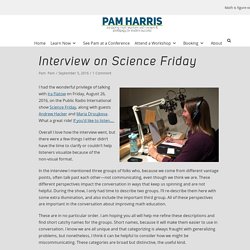 What a great ride! If you’d like to listen…. Overall I love how the interview went, but there were a few things I either didn’t have the time to clarify or couldn’t help listeners visualize because of the non-visual format. In the interview I mentioned three groups of folks who, because we come from different vantage points, often talk past each other—not communicating, even though we think we are.

These different perspectives impact the conversation in ways that keep us spinning and are not helpful. These are in no particular order. Group X: In this group are the folks that despite traditional teaching actually constructed mathematical relationships in their heads and then used those connections to solve problems. These folks saw the math behind the directive to rote memorize rules.

Related. The Elusive Search for Balance - National Council of Teachers of Mathematics. By Matt Larson, NCTM PresidentFebruary 20, 2017 In a recent President’s blog post on the need to make homework comprehensible, I referred to the Fordham Institute Report, Common Core Math in the K–8 Classroom: Results from a National Survey. The report offers another interesting finding: “The math wars aren’t over.” The authors of the report observe, “The Common Core math standards seek to bring a peaceful end to the ‘math wars’ of recent years by requiring equal attention to conceptual understanding, procedural fluency, and application (applying math to real-world problems).

Yet striking that balance has not been easy. The Map of Mathematics. The Teacher Curse No One Wants to Talk About. Knowledge is a curse. 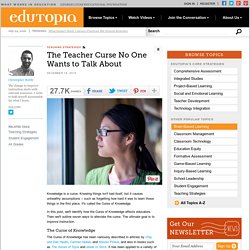 All of the resources describe the same phenomena -- that a strong base of content knowledge makes us blind to the lengthy process of acquiring it. What Makes a Genius? This story appears in the May 2017 issue of National Geographic magazine. 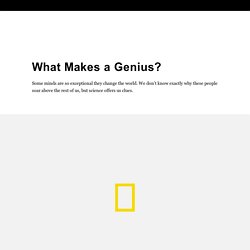 The Mütter Museum in Philadelphia houses an array of singular medical specimens. On the lower level the fused livers of 19th-century conjoined twins Chang and Eng float in a glass vessel. Nearby, visitors can gawk at hands swollen with gout, the bladder stones of Chief Justice John Marshall, the cancerous tumor extracted from President Grover Cleveland’s jaw, and a thighbone from a Civil War soldier with the wounding bullet still in place. But there’s one exhibit near the entrance that elicits unmatchable awe. Look closely at the display, and you can see smudge marks left by museumgoers pressing their foreheads against the glass. Preparing Students for Careers of the Future: Top 13 Picks. We all want to prepare students for careers they’ll love and thrive in. 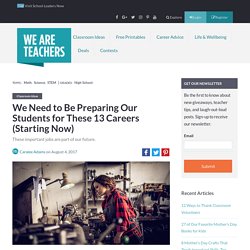 But with globalization and technological advances, is it possible to predict what the future of jobs will look like? While some of today’s jobs will soon be replaced by automation and new careers will be created, two skills will benefit students no matter what their path looks like—specialized training and a love of learning. “It’s not necessarily all about technology jobs,” says Nicholas Wyman, author of Job U and chief executive officer of the Institute for Workplace Skills and Innovation.

Kraft blazar hogan 2017 teacher coaching meta analysis wp. What Do Mathematicians Notice? Ever since hearing Annie Fetter talk about Notice and Wonder at the Atlantic City NCTM Regional Conference in October, I have been obsessed with the strategy. 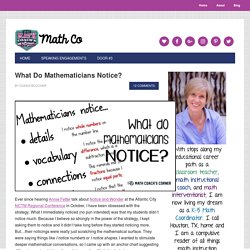 How Playing With Math Helps Teachers Better Empathize With Students. Michelle Manes has taught math in almost every setting. 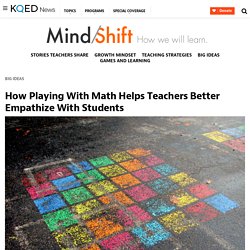 She taught public high school students, deaf elementary school students, and middle school girls at a single-sex school. But eventually, she couldn’t fight the feeling that as much as she loved teaching math, she also loved doing math, so she went back to get her Ph.D. in mathematics and is now a professor at the University of Hawaii. Although she has settled into a life of teaching undergraduate students and working on her own research, Manes still cares deeply about K-12 education. To stay connected to teachers in that world she helped start a Math Teachers’ Circle in Honolulu. The circle meets once a month and invites math teachers from all grade levels to get together and work on fun, challenging math alongside research mathematicians. “I try to bring that creativity and joy and excitement and discovery piece into the Math Teachers’ Circle and hope it trickles into the classroom,” Manes said. Teach Math With Mondrian, Calder, Warhol and Others!

Teach math with art! Students learn about famous artists while using their math skills. Area Perimeter Mondrian Combine art and math in this area/perimeter lesson, Piet Mondrian–style. Have kids lay out their artwork on grid paper (color in the squares). Next, have them figure out the area and perimeter of each “block,” using their black grid lines as their guide.